Based on distributional data, Nebraska Dunlin are presumed hudsonia.

A few Dunlin arrive in Apr, but most move through in May. Peak counts occur in late Apr and the first half of May.

Reports before Oct are unexpected, as, unlike other long-distance migrants of the genus, there is no early movement of adults; adults and young birds migrate together after all have completed molting (Holmes 1966). An adult still showing traces of a black belly was in Stafford Co, Kansas 5 Jul 2018 (Rader, https://ebird.org/view/checklist/S47003929).

The major movement of Dunlin is during the latter half of Oct, although numbers are significantly lower than in spring (see High Counts). Two of the reports during the peak period are specimens taken in Lancaster Co, one a molting adult taken 14 Oct 1890 (cited above) and the other a juvenile molting to first basic taken 20 Oct 1917 (UNSM ZM6170).

Dunlin are rare northward on the Great Plains in winter. There are no records for South Dakota or Wyoming, but several for the Rocky Mountain foothills in northeastern Colorado and scattered records for Iowa, Missouri, and Kansas (eBird.org, accessed Dec 2020). 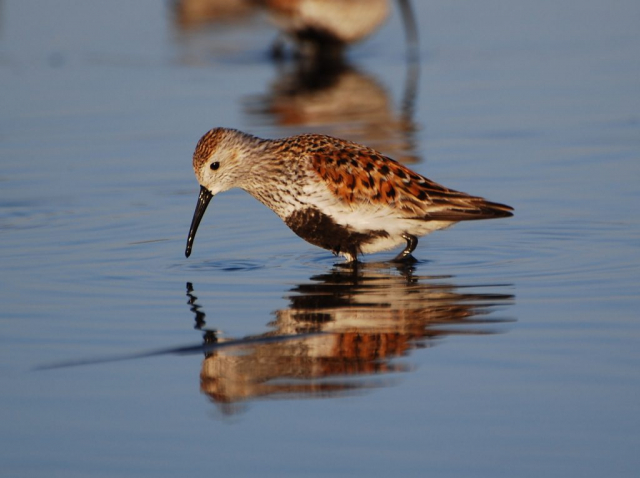