Taxonomy: There are eight subspecies generally recognized (Pyle 1997), three of these north of Mexico: fulva of the southwest USA to central Mexico, grata of South Florida (included in sialis by Gowaty and Plissner 2020), and sialis, of southern and southeastern Canada, eastern and central USA and northeastern Mexico.

Hybridization of Eastern and Mountain Bluebirds is discussed at https://birds.outdoornebraska.gov/eastern-x-mountain-bluebird-hybrid/.

Due to a decline in numbers as winter progresses, a spring influx is detectable in mid-Mar in the west; there are no Feb reports there and very few for early Jan. The 37 at Smith Lake WMA, Sheridan Co 16 Mar 2006 was a good count for the early date. In recent years spring migrants have become more numerous in the Panhandle.

Summer: The historical range of oak savannah once defined the breeding range of Eastern Bluebird, which was generally limited to the southeastern third of Nebraska. Currently, however, this species breeds statewide, utilizing open areas where deciduous trees are present (Rosche 1982). Numbers are lowest in the western Sandhills and the southern Panhandle, and generally decline from east to west. The provision of nest boxes for bluebirds in the Panhandle and elsewhere has attracted Eastern Bluebirds in recent years. BBS trend analysis show Eastern Bluebirds have increased at an annual rate of 3.80 (95% C.I.; 1.95, 5.60) statewide during the period 1966-2015 (Sauer et al 2017).

Expansion into the Pine Ridge is recent, but reports have increased markedly since 2000, and the species is now widespread as a breeder on the Pine Ridge (Mollhoff 2016). Although there are three old specimens for the Panhandle, all from Monroe and Warbonnet Canyons in northwest Sioux Co, 24 May 1900 (UNSM ZM6692 and ZM6693) and an immature 21 Jun 1901 (UNSM ZM6694), and Ducey (1988) cited a nest record card for Dawes Co in 1962, the first modern Pine Ridge record was as recent as 1974 in Sioux Co (Ducey 1988). Rosche (1982), however, had stated that there were no definite nesting records for the Pine Ridge at that time, and included only one summer report from the northwest, a pair at a hole in “cottonwood forest” at Box Butte Reservoir, Dawes Co in summer 1981. More recently, Wilson et al (1985, 1986, Williams 1985) found an apparent hybrid male Eastern X Mountain Bluebird mated with a female Mountain Bluebird in Dawes Co, some eight miles south of Crawford, in the summer of 1985. This pair fledged two broods from a nest box. Wilson et al (1986) suggested that hybridization in this case may have resulted from low numbers of summering Eastern Bluebirds in the area and the resulting shortage of mates. A nest with young was found in West Ash Canyon, Dawes Co, 2 Jun 2000 (Mollhoff 2001), and a male was feeding three recent fledglings in Smiley Canyon, Dawes Co, 1 Aug 2001. A few miles south of the Pine Ridge, four young were fledged at Box Butte Reservoir, Dawes Co 8 Jul 1994 (Silcock and Rosche 1994).

The first nesting record in Scotts Bluff Co was in 1986, when a pair was present 24 May-2 Aug and used a box set out for Mountain Bluebirds (Cortelyou 1986). Most Eastern Bluebird sightings in Scotts Bluff Co are at the Wildcat Hills NC, where six pairs and at least one nestling were at the nest boxes there 13-14 Jun 1998, and seven nests were in nest boxes there 16 Jun 2002. Mollhoff (2016) did not show a notable increase in the number of reports from the Scotts Bluff Co area, in contrast to the recent increases on the Pine Ridge.

The only records of breeding from the southern Panhandle are the fledging of four young in Cheyenne Co 4 Jul 2003, a nest with eggs in the Limber Pine BBA block, Kimball Co 25 Jul 2006 (Mollhoff 2016, unpublished data), confirmed breeding in Deuel County in 2007 (Mollhoff 2016), and an adult and juvenile at Oliver Reservoir, Kimball Co 19 Aug 2011.

Fall: Peak migration is in Oct; in the north and west most birds depart by late Oct, although there are numerous reports through Nov. Departure in the south and east is difficult to detect as many birds linger into winter.

Fall flocking may occur early; a flock of 19 was in Johnson Co 13 Jun 2012. Juvenile flocks may migrate independently of adults, remaining cohesive throughout winter and heading north as a flock the following spring (Gowaty and Plissner 2020).

Winter: CBC data show that in Dec Eastern Bluebirds are still distributed statewide, but highest numbers are in the extreme southeast. Observations from eBird (eBird.org, accessed Jan 2021) show that during Jan few remain in the north and west, but by Feb northward movement is beginning, most noticeably in the south-central and east.

In 2020-2021, there was a severe decline in numbers, generally considered a result of intense and persistent winter cold in the Midwest that reduced the supply of food (Tim Barksdale); another observer (John Bissell) noted “Since Eastern Bluebirds are considered short distance migrants, I wonder if the harsh February weather in the southern US impacted Bluebird numbers”. There may have been other factors involved as well, as suggested by Joe Gubanyi: “The 49 tallied [on the Branched Oak-Seward CBC] in 2020 was the lowest tally since 2004. I did find several references that stated eastern bluebirds are vulnerable to harsh winters, but the CBC was done well before the extreme cold weather occurred, so something else may be affecting eastern bluebird numbers.” Nevertheless, there was much anecdotal data from bluebird nest box trails supporting lower numbers of nesting bluebirds, and a simple but controlled compilation of numbers of Eastern Bluebirds reported to eBird for the last four years that showed 477 in 2018, 464 in 2019, 624 in 2020, and 195 in 2021, a 69% decline 2020 to 2021 (Joel Jorgensen). This degree of decline was supported by reports of NOU members over the weekend of 15-16 May, when Eastern Bluebirds were reported in 7 of 63 counties compared with 18 out of 60 in the 2020 event, a 63% decline. There was “much lower than normal” occupancy in a 50-box operation in Washington Co; only 5 boxes were occupied 12 Jun 2021. 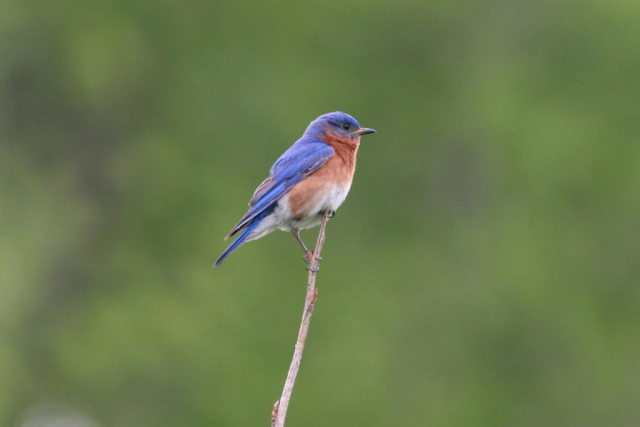 Photograph (top) of a Eastern Bluebird at Schramm State Park, Sarpy Co 7 May 2006 by Phil Swanson.