Eastern Phoebe is the earliest-arriving flycatcher, arriving in mid-Mar, later in the north and west.

Several observers in spring 2021 noted lower Eastern Phoebe numbers and this impression was supported by a simple but controlled compilation by Joel Jorgensen of numbers of Eastern Phoebes reported to eBird for the last four years that showed 371 in 2018, 401 in 2019, 512 in 2020, and 265 in 2021, a 48% decline 2020 to 2021. The drop was attributed by some to unusually persistent cold temperatures affecting the food sources of this early migrant.

Summer: BBS data indicate that Eastern Phoebe is most common in the east and east-central (Sauer et al. 2017; it is least abundant in the western Sandhills and Panhandle away from the North Platte River Valley and the Pine Ridge (eBird, accessed Jun 2016). Where it occurs in the western half of Nebraska, Eastern Phoebe tends to be associated with river valleys, whereas in the eastern half of the state it is widespread. Based on available reports there is minimal evidence for westward expansion; it has traditionally been considered eastern in distribution (Bruner et al 1904, Thompson et al 2011, Weeks 2020). It is a “very rare summer resident” in Wyoming (Faulkner 2010). However, BBS trend analysis shows the species has increased annually a notable 2.99% (95% C.I.; 1.19, 4.66) during the period 1966-2015 (Sauer et al 2017).

In the north it is common westward at least to eastern Cherry Co (Brogie and Mossman 1983), including Valentine (Short 1961), but rare along the Niobrara River Valley westward to the eastern Pine Ridge. It is rare in the western Sandhills (Rosche 1982); westernmost Jun-Jul reports there are at Valentine NWR and NNF Bessey, Thomas Co, although Glandon reported a nest with eggs near Stapleton, Logan Co 15 May 1939 (Glandon 1939).

In the Panhandle, it breeds in small numbers in Pine Ridge canyons and along tributaries of the White and Niobrara Rivers (Rosche 1982) but is absent as a breeder elsewhere (Mollhoff 2022). A nest with recently fledged young was found in West Ash Creek Canyon 8 Jun 2004 (Mollhoff 2005). In 2009 several birds were found in three BBA blocks in Dawes Co 13 Jun, including a nesting pair (Mollhoff 2016), and one was south of Chadron in Dawes Co 9 Jul 2016.

Mollhoff (2016) shows confirmed breeding throughout the Republican and French Creek Valleys; it had not been reported from the latter by Mollhoff (2001).

Departure is in late Sep and early Oct, although in the east Eastern Phoebes may linger rather late.

Comments: Nests are typically constructed under bridges or abandoned or little-used buildings. In the Niobrara River Valley and at Valentine it breeds exclusively under bridges, which seems to be true in the northwest also (Rosche 1982). Short (1961) noted that where Say’s Phoebe occurred with Eastern Phoebe at Valentine, Say’s Phoebe utilized buildings only, while Eastern Phoebe was found at bridges. McClure (1946), however, found in central Nebraska that both species used bridges and buildings. 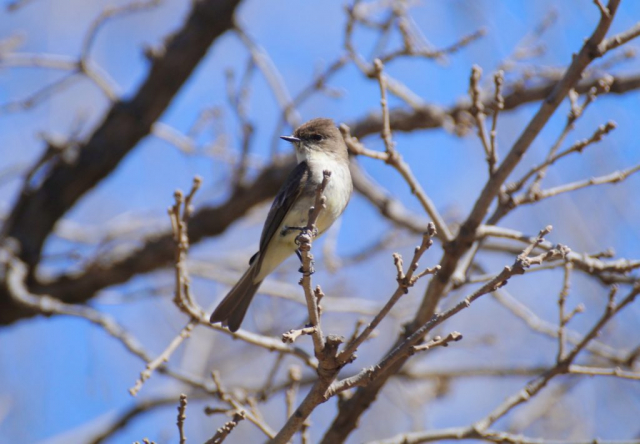