Taxonomy: The use of Megascops instead of Otus for New World species of Otus (except for O. flammeolus, Flammulated Owl, now placed in genus Psiloscops) was discussed by Banks et al (2003).

The taxonomy of North American screech-owls has undergone considerable revision during the past 100 years or so, yielding as many as 14 subspecies; recently these were split and assigned to two species, Eastern Screech-Owl, M. asio, and Western Screech-Owl, M. kennicottii (AOU 1983). There are six subspecies assigned to M. asio: maxwelliae of the Great Plains in south-central Canada and north-central USA, naevius of southeast Canada and northeast USA south to North Carolina, asio from Oklahoma to South Carolina and Georgia, hasbroucki from central Oklahoma to Texas, floridanus from Louisiana to Florida, and mccallii from south Texas to northeast Mexico.

Three morphologically-distinct color morphs, gray, red, and brown, are represented. These morphs are genetically-determined and independent of age, gender, or season, but may be distributed to some extent geographically; Pittaway (2014) noted that only 7% of maxwelliae specimens were red morphs and 6% brown, and that red morphs are scarcer towards the north and west. Indeed, Rosche (1982) recorded no red morph birds in northwest Nebraska, and elsewhere in the state red morph birds are rarely reported. One was at Fred Thomas WMA, Brown Co Apr 1911, and recent reports are of one in Knox Co 25 Oct 2006, a road-killed bird in Cass Co 18 Mar 2007, and one of the parents of three fledged juveniles at Pepperwood Park, Douglas Co 13-17 Jun 2021 was a red morph.

Resident: Screech-Owls occur statewide, but in the west are restricted to riparian corridors or woodlots on ranches. It is common in the Platte Valley at least as far west as Hall Co (Lingle 1994), occurs in numbers in the Niobrara River Valley westward at least to the Niobrara Valley Preserve, Keya Paha and Brown Cos (Mossman and Brogie 1983), and occurs throughout the Republican Valley (Johnsgard 1979, Andrews and Righter 1992). It is probably least numerous in the Sandhills due to scarcity of habitat; Rosche (1982) cited no summer records from Sheridan Co, but it was reported in suitable habitat at Anderson Bridge in central Cherry Co. in summer 1982 (NBR 51: 62-63).

Accurate estimates of numbers are difficult to make as this owl is strictly nocturnal. BBS protocol rarely detects this species, and it is apparent that there may be “more Screech-owls around than most people realize” (Cortelyou 1972).

A female in a monitored nest box in Sheridan Co laid eggs on 9 May 2013, five weeks later than in 2012 (Wayne Mollhoff, personal communication); dates of laying appear to be dependent on ambient temperature (Ritchison et al 2020).

It has been suggested by some authors that because there appear to be more sightings in winter there may be visitors at that time from the north and west (Rapp et al 1958, Ludlow 1935), but this is yet to be verified.

Comments: Wayne Mollhoff (personal communication) suggested that screech-owls may have been affected by West Nile Virus; he stated (2016) “And as to numbers, they took a big hit, along with many other species, when West Nile Virus hit us about 15 years ago. Their losses were much greater than the Great Horned Owls, which were more often found sick simply because they are so much more noticeable”. Analysis of data for the Seward-Branched Oak Lake CBC, Lancaster Co 1993-2020 suggested a decline in numbers, possibly related to West Nile Virus (Gubanyi 2020).

One collected in Cherry Co May 1923 is specimen KU74493 at the University of Kansas. 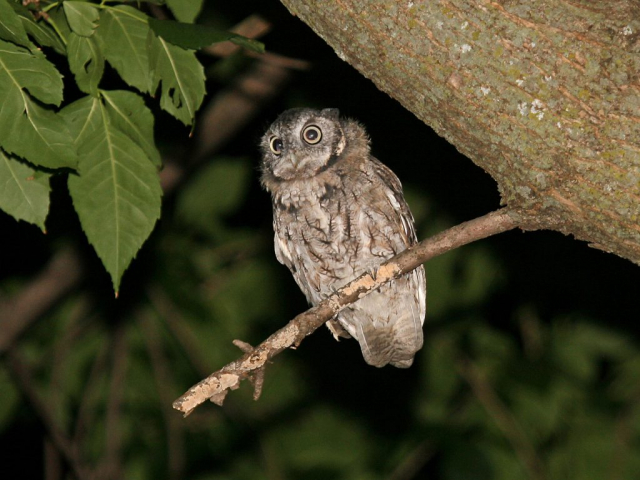 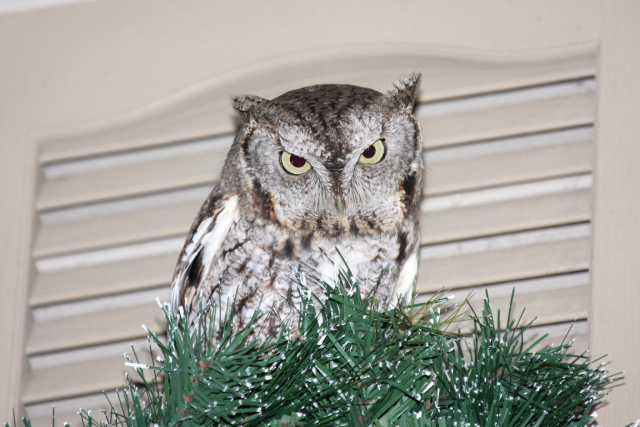