This species and 10 others previously in Caprimulgus were moved to Antrostomus based on Han et al (2010).

Arrival is in late Apr. An earlier date is of one that hit a window 13 Apr 2018, recovered, and was released after photographs were taken (Elaine Bachel, personal communication).

Arrival is in late Apr. The only reports from the western half of the state, none with tangible evidence, are of one in Perkins Co 6 May 1970 identified by size and wing length relative to the tail (Cortelyou 1970), one in Dawson Co 28 Apr 1935, the only local record (Kinch 1964), one in McPherson Co 17 Jun 1972 (Cortelyou 1972), and one heard at Keystone, Keith Co 16 May 2021 by an observer familiar with calls of this species and Mexican Whip-poor-will.

One was westerly near Gibbon, Buffalo Co 22 May 2001, and one was in Hall Co 19 May 2021. Whip-poor-will was considered a rare migrant in Hamilton Co in 1962 (Swanson 1962). A bird reported as this species with “pretty definite white on the sides of its tail” was flushed at Sacramento-Wilcox WMA, Phelps Co 20 Apr 2020 by an observer familiar with Common Poorwill (Bob Meduna, pers. comm.); this is a westerly location for this species and the possibility of Common Poorwill, although easterly at the location but probably more likely, could not be eliminated from the description. Whip-poor-will is a casual migrant in eastern Colorado in May and Sep (Andrews and Righter 1992; eBird.org, accessed May 2021).

Summer: Like Chuck-will’s-widow, documented nesting records are few, perhaps six in all. Most recent are of a nest with two eggs at Ponca SP, Dixon Co 16 May 2009 (Mollhoff 2016) and a nest with an egg and a chick photographed at Indian Cave SP, Richardson Co 3 Jul 2014.

Breeding or territorial birds occur in oak-hickory forest in the southeast, along the lower Platte River Valley, and along the lower Niobrara River Valley (Brenner and Jorgensen 2019, 2020). The species is often absent in woodland habitat that is intensively grazed (Youngworth 1958), and in dense, closed-canopy forest, preferring relatively open woodland habitats (Cink et al 2020).

In the Niobrara River Valley, it occurs west to extreme eastern Cherry Co, where singing males were heard 3 and 14 Jun 1982 (Brogie and Mossman 1983); there were multiple reports from Smith Falls SP, Cherry Co 19 May-19 Jun 2015-2017. Westernmost report is of one calling at Berry Bridge Campground, Cherry Co, 26 May 2017, and in 2020 calling birds were at three locations along the river between Berry Falls and Smith Falls 21 Jun (Gordon Warrick, Jim Ducey, pers. comm.). One was heard along Highway 12 in extreme western Keya Paha Co 7 May 2002, two were in eastern Keya Paha Co 12 Jun 2014, and 1-4 were counted at each of eight stops along Ponca Creek on Highway 12 in Boyd Co 28 Jun 2012. A 2019 survey found good numbers in the three-county Middle Niobrara Valley Biologically Unique Landscape, with best count per survey route the nine in Keya Paha Co (Brenner and Jorgensen 2019).

It occurs regularly in the Platte River Valley only west to the Morse Bluff area of northern Saunders Co, where 14 were counted 17-21 May 1995 (Silcock 1995); it was unrecorded in Hall Co by Lingle (1994), although Mollhoff (2001) showed a “possible” breeding record in Hall Co in the period 1984-89. One at Yellowbanks WMA, Madison Co 7 Jul 2021 was at a new location in the Elkhorn River Valley.

Migration occurs in late Aug and Sep. “Scores” were heard at Platte River SP, Cass Co 3 Sep 1983 where none were heard 8 Aug; these birds were considered migrants (Green 1984). It appears that summer singing tails off by early Sep but there may be a resurgence just prior to fall departure in mid-late Sep. One was recorded at Ponca SP, Dixon Co 16 Sep 2018 and up to four were recorded at Schramm SP, Sarpy Co through 27 Sep 2020, and up to three were recorded 29 Sep-3 Oct 2021.

Whip-poor-wills may occur on occasion west of the summer range during fall migration; three were heard in Polk Co 2 Sep 2012, singles were seen at Wilderness Park, Lincoln, Lancaster Co 23 and 24 Sep 2000, and westernmost was one calling in Lincoln Co 8 Sep 2014. This species is a casual migrant in eastern Colorado in May and Sep (Andrews and Righter 1992).

Tracking studies by Skinner et al (2022) indicated that Whip-poor-wills breeding in the central United States (ie western half of the summer population) undergo a synchronized fall migration around the western end of the Gulf of Mexico, congregating in early October in an area from southern Missouri to northeastern Texas and wintering in southern Mexico and northern Central America. 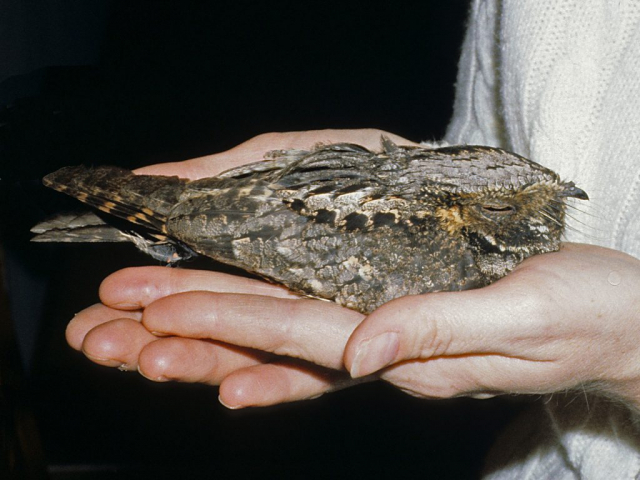