We believe that published Nebraska reports prior to May 1 are likely to be of Eastern Phoebe, an early migrant, or if heard only, various calls of European Starling. The earliest South Dakota records are in the first week of May (Tallman et al 2002), and in Iowa there are only two late Apr records (Kent and Dinsmore 1996). The earliest Kansas specimen is 9 May (Thompson et al 2011).

Summer: Eastern Wood-Pewee is most numerous in deciduous forest along the Missouri, Elkhorn, and Platte Rivers, and within the upland oak-hickory region of the extreme southeast. Elsewhere it is found westward along major river valleys, but numbers decline rapidly, with few reports from the west since 2000. During the 20th Century, Eastern Wood-Pewee slowly extended its range to the west, resulting in contact zones with the more-rapidly eastward-expanding Western Wood-Pewee on the Niobrara River in Sheridan Co (Short 1961; Grzybowski 1988), the lower North Platte Valley in Garden, Keith (Brown et al 1996), and Lincoln Cos, and probably in Deuel Co along the South Platte River (Short 1961) although there are no reports from Deuel Co since 2000.

The species occurs west along the Niobrara River Valley to the Valentine, Cherry Co area and nearby Niobrara River tributaries. Nesting was observed in western Keya Paha Co (Mossman and Brogie 1983) and it has nested at Valentine NWR where It is “uncommon” (USFWS Checklist Valentine NWR). Recent summer reports from northeast Cherry Co are of one at HS Ranch, about 13 miles south of Nenzel, 27 Aug 2013, one was reported as “Eastern/Western” near Merriman 19 Aug 2012, and two were at Steer Creek Campground, NNF McKelvie, 14 Jul 2017.

Short (1961) suggested that there may be contact between this species and Western Wood-Pewee in the Niobrara River Valley between Valentine and the Pine Ridge area, although numbers of either wood-pewee species in this area are limited (see Comments).

Rosche (1982) considered Eastern Wood-Pewee a “very rare summer visitor” in the northwest, with dates for singing birds in the period 29 Jun-28 Aug only; most sightings in the northwest are from cottonwood forest at Box Butte Reservoir, Dawes Co. Additional Dawes Co reports, probably also from Box Butte Reservoir, are 7 Jun 1996 (Grzybowski 1996), 29 Jun 1966, and 1 Jul 1968. The only recent Pine Ridge report is of one at Fort Robinson SP, Dawes Co 10 Jun 2010. Additional reports from the Panhandle are 9 Jul 1968 and 14 Jul 1987, both in Scotts Bluff Co (Williams 1987).

Although in the 1940s Tout (1947) considered Eastern Wood-Pewee “very rare” in Lincoln Co in the Platte River Valley, it now occurs west to the North Platte area, where it has been found in four summers since 2002, and the Lake McConaughy area in Keith Co. Rosche (1994) considered Eastern Wood Pewee a “casual summer visitant” in the Lake McConaughy area, and Brown et al (2012) described it as a “rare summer resident” there, noting that singing males were heard below the Keystone Diversion Dam in 1993, and that a juvenile netted 12 Aug 1993 “might have been from a nest in the area”. Rosche (1994) found a singing bird 16 Jul 1987 within 220 yards of a Western Wood-Pewee pair carrying food, and one “sang repeatedly” from cottonwood forest in Eagle Canyon, Lake McConaughy 4 Jun 1992 (Grzybowski 1992, Morris 1992, Rosche 1994). Since 2000, there have been only eight reports from the Lake Ogallala area, all probably of migrants (see Spring, Fall), although one on 18 Jun 2017 may have been a potential breeder.

Short (1961) noted Eastern Wood-Pewee breeding along the South Platte River to the Colorado border, where it was thought to make contact with Western Wood-Pewee. There are six recent occurrences along the South Platte River within 40 miles of Nebraska in the period 24 May-18 Aug, all but one since 2012, and including 1-2 at Tamarack Ranch State Wildlife Area, Logan Co 3 Jun-6 Aug 2016 (eBird.org, accessed October 2017).

It has been stated that this species breeds west in the Republican River Valley to Dundy Co (Johnsgard 1979, 1980), although there are only a few breeding season reports west of Harlan Co, where it was found at Hunter’s Cove, Harlan County Reservoir, 3-4 Jun and 11 Sep 2005, at two locations 17 and 19 Jun 2014, and at Methodist Cove, Harlan County Reservoir, where three were singing 11 Jun 2015. In recent years, breeding season reports further west have increased; singles were near Oxford, Harlan Co 24 Jun 2008 and at two locations there 11 Jul 2014, and singles were in Red Willow Co prior to 2000 and 23 Jul 2010. In addition, there are several reports in the Medicine Creek drainage; this stream drains into the Republican River in extreme northwest Furnas Co. These reports extend northward into southeast Lincoln Co, where singles were found 14 Jun 2011 and 2 Aug 2011; in the lower drainage there are reports in Frontier Co, including Medicine Creek Reservoir, 10 Jun 2009, 19 Jun 1991, 23 Jun and 21 Jul 2011, and 10 Aug 2013. A few May and Aug reports in these areas may be of potential breeding birds; these dates are cited in Spring and Fall. There are two recent reports in the Republican River-Arikaree drainage in extreme northwest Kansas in Sep 2013 and Sep 2015 (Bill Kaempfer post to NEBIRDS 14 Jun 2016); it breeds west to Jewell Co in Kansas (Thompson et al 2011, Busby and Zimmerman 2001), with an isolated confirmed breeding record as far west as Seward Co (Busby and Zimmerman 2001).

Only casual in the Panhandle, it may be more numerous than currently thought; identification in fall is difficult. A juvenile was captured and photographed at Oliver Reservoir, Kimball Co 31 Aug 2000; appearance (lower mandible was entirely yellow, it had a light breast-band with no vest effect) and measurements indicated this species (Dinsmore 2000, Jorgensen 2002). Singles were at Lake Ogallala 2 Sep 2006 and 20 Aug 2017.

Comments: Determination of the range limits of this species and Western Wood-Pewee is difficult because of the problems of identification of the two species away from their regular breeding grounds. They are very similar in appearance, even sometimes considered conspecific (Mayr and Short 1970), and may hybridize, although probably only to a limited extent (see the Western x Eastern Wood-Pewee species account). Plumage characteristics are at best suggestive, and vocalizations may be misleading, although generally species-specific if carefully heard (Rising and Schueler 1980). Short (1961) studied the wood-pewees in Nebraska, and noted that while songs usually identify these species, “occasional songs of Western Wood-Pewee are virtually indistinguishable from Eastern Wood-Pewee singing abbreviated [rather than full] songs.” Songs with the pattern of Eastern Wood-Pewee but tonal quality of Western Wood-Pewee were heard in eastern Cherry Co 21 May 1989 (Grzybowski 1989, Ducey 1989), and singing birds of both species were found “side-by-side” in Sheridan Co in 1988 (Grzybowski 1988). Both species were found breeding at Smith Lake WMA, Sheridan Co, in the period 1989-2008, although Eastern Wood-Pewee was considered “rare” (Steven Jones, pers. comm.). Rosche (1994) found a singing bird 16 Jul 1987 within 200 m (220 yards) of a Western Wood-Pewee pair carrying food at the west end of Lake McConaughy.

The identification problem may not have been important earlier in the 20th century, as Swenk and Dawson (1921) indicated that Western Wood-Pewee occurred only west of the 100th meridian and its range and that of Eastern Wood-Pewee “do not anywhere meet.” 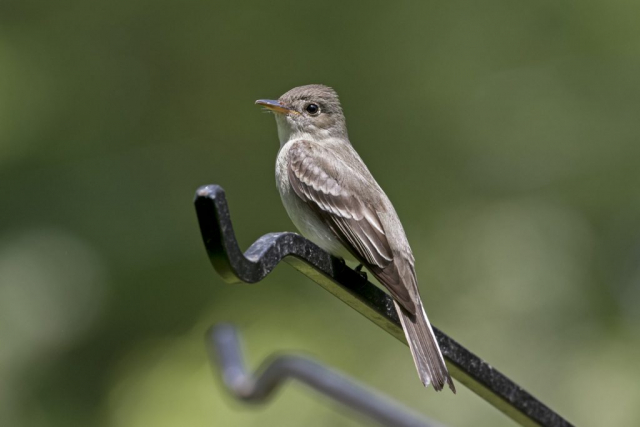