Taxonomy: There have been two subspecies recognized in the native range of this species: decaocto from Europe to western China and Korea, and xanthocyla in Burma and eastern China (Clements et al 2016). More recently the two have been raised to species status, the introduced North American birds decaocto (Romagosa 2020).

Numbers of wild birds may be augmented on occasion by released Ringed Turtle-Doves (see that species).

Changes Since 2000: This species has expanded its range and numbers have increased dramatically in Nebraska since 2000 with largest increases occurring in western Nebraska (Figures 1 & 2 in Appendix).

Resident:  Arrival, range expansion and increase in numbers by this species in Nebraska was discussed by Brogie and Silcock (2004). As of Mar 2001, it was “now residing in many of the larger towns in the Panhandle” (Stephen J. Dinsmore, personal communication), and occurred in numbers in and near Kearney, Buffalo Co. By spring 2004, it had been reported in 77 counties (Brogie and Silcock 2004), the main exceptions being in the Sandhills; the final county to record the species was Keya Paha, on 18 Feb 2007. In 2008 it was considered “common”, even in the Sandhills, although as of spring 2017 there are still few reports from Cherry Co. It is by far most common in rural towns in western Nebraska and has only become noticeable in the east since the early 2000s. According to Brogie and Silcock (2004), earliest records in the east were 23 Jul 1999 Pierce Co, 23 Jan 2000 Dakota Co, and 21 Feb 2000 Cass Co, and records prior to 2000 elsewhere were 11 Jul 1998 Nuckolls Co, 22 Aug 1998 York Co, and Nov 1999 Thayer Co.

An earlier report was of one in Cuming Co Jun 1995 by Dr David Mlnarik (eBird.org). Unfortunately, we consider this report unconfirmed as a first state record based on the lack of a photo and the identification by phone, which do not eliminate the more likely at the time possibility of the bird being a Ringed Turtle-Dove.  The next report of an Eurasian Collared-Dove in the east was in 1999 (see above).

Since these initial records, numbers have increased dramatically, most notably in the west; CBCs in winter 2016-2017 reflect this distribution, with Scottsbluff reporting 1359 on 29 Dec 2017, a new count high, while across the state totals were North Platte 166, Harlan County Reservoir 50, and Omaha 33, the latter a new count high.

This species, like Rock Pigeon, may attempt to nest almost year-round, but mostly in Feb-Oct (Romagosa 2020). Four broods were raised in a Sidney, Cheyenne Co yard in 2006.

Comments:  Escaped and released birds of the nominate subspecies decaocto (Romagosa 2020) on New Providence, Bahama Islands, in 1974 spread rapidly thereafter in the northern Caribbean and to Florida by the late 1970s (Smith 1987). Subsequently it has spread northwestward on the Great Plains and was first discovered in Nebraska at a feeder in Shelton, Buffalo Co 29 Nov 1997 (Brogie and Silcock 2004).

A specimen shot by a hunter in Stanton Co 16 Sep 2000 and mentioned in Brogie and Silcock (2004) cannot now be located. 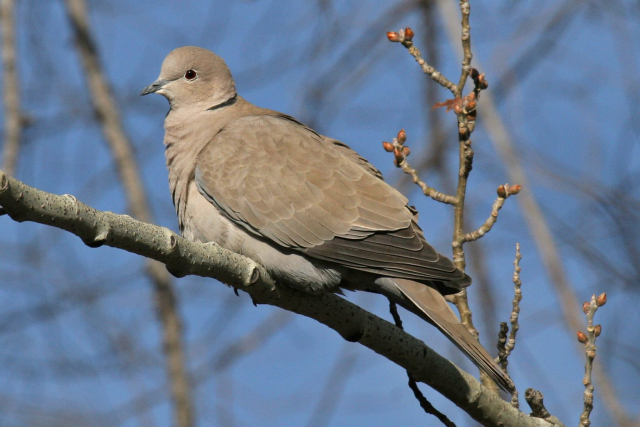 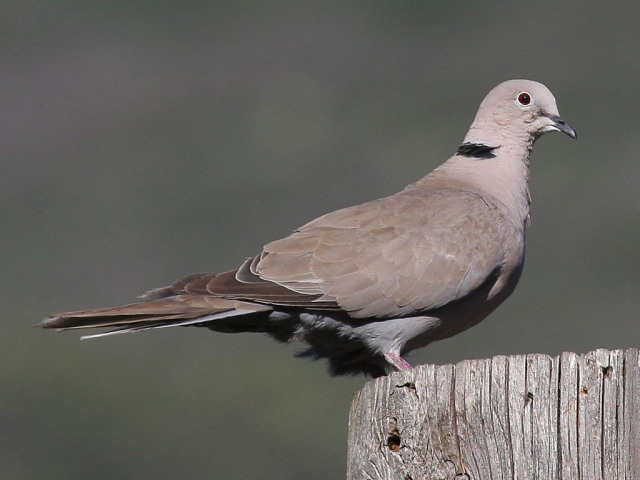 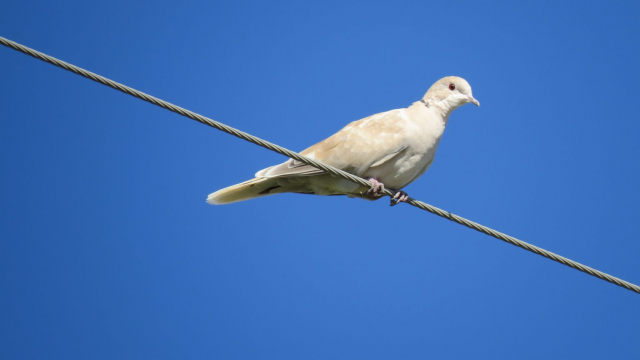 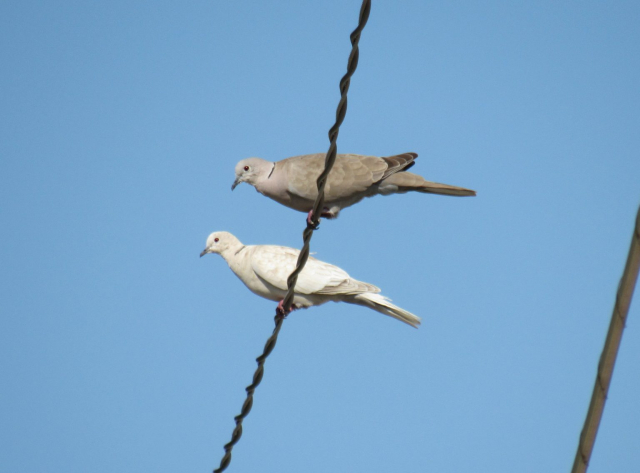 Photograph (top) of an Eurasian Collared-Dove at Papillion, Sarpy Co on 11 Apr 2011 by Phil Swanson. 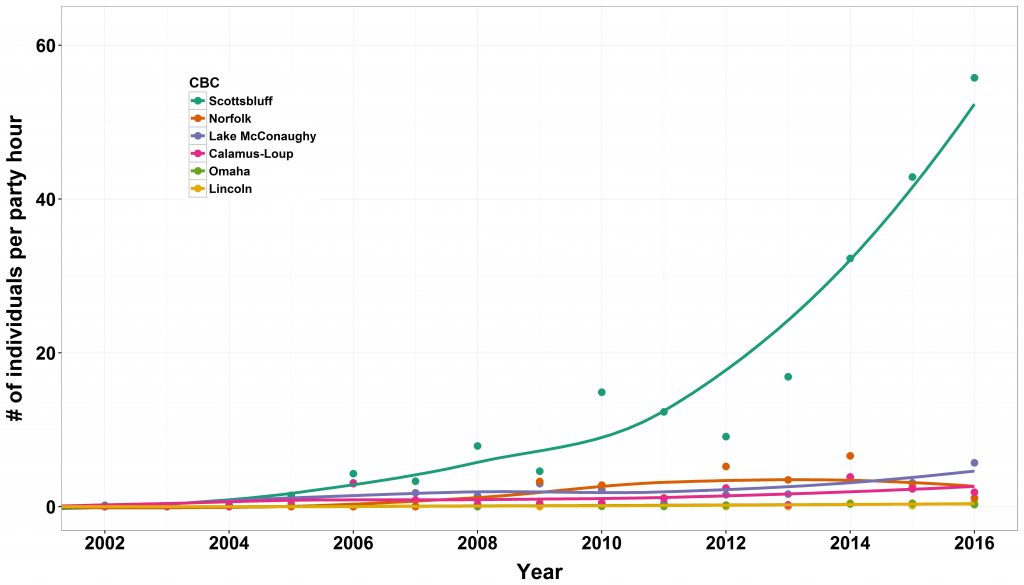 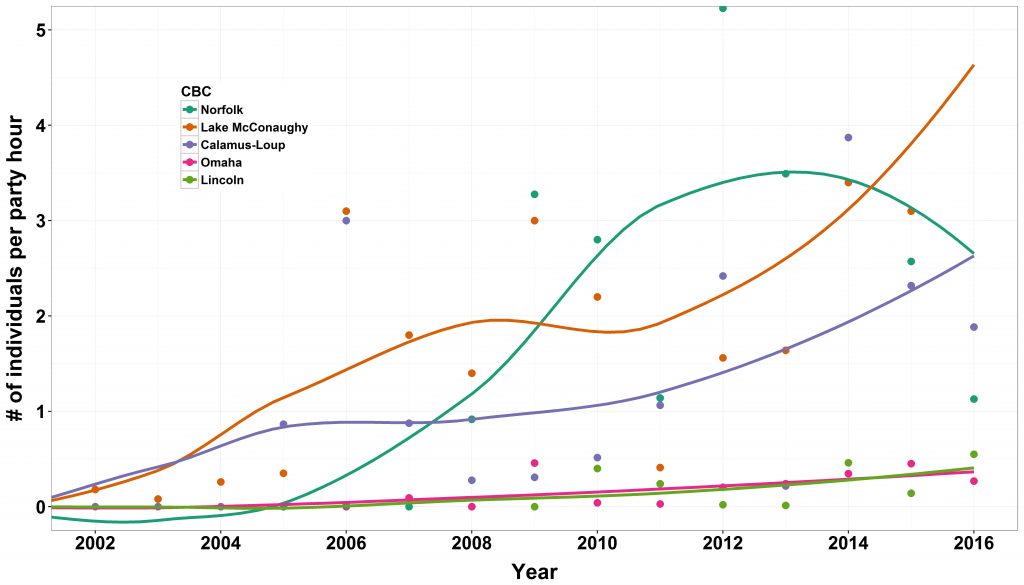 Figure 2. The number of Eurasian Collared-Doves recorded per party hour at selected CBCs in Nebraska.  Figure 2 includes the same data as Figure 1 with the exception that the Scottsbluff CBC is excluded. Points represent reported values and trend line created using locally weighted scatterplot (LOESS) smoothing.  Data collected by volunteers and provided by National Audubon Society and the Nebraska Ornithologists Union.  The graphic shows that larger increases have occurred in the west and central and increases have been smallest in the east (i.e., Omaha and Lincoln CBCs).