Taxonomy: Two subspecies are recognized (Pyle 1997): arenacea, breeding from Montana to North Dakota south to southeast Colorado and Oklahoma, wintering to south Texas and Mississippi, and pusilla, breeding from Minnesota to Maine and south to east Texas and Florida.

Carey et al (2020) treated the species as monotypic based on a cline of grayish plumage decreasing from west to east, with only birds at each end of the cline diagnosable. This cline is indeed discernible in Nebraska specimens; three specimens at UNSM from northern and western Nebraska are bland-faced with unmarked breast and flanks, while those from eastern and south-central Nebraska are darker. These darker birds, breeding in southeast South Dakota and Nebraska have been described as perissura but were considered to be only clinally different from pusilla (Pyle 1997).

Bruner et al (1904) assigned breeding birds in western Nebraska, the Niobrara River Valley, and the Loup drainage south to Broken Bow to arenacea, with pusilla breeding in the lower Missouri Valley, its northern limits uncertain; Bruner et al (1904) suggested there may be no “pure” pusilla breeding in Nebraska. It is likely that Nebraska breeding birds exhibit a clinal change from darker birds in the east to grayer birds in the west, as observed in extant museum specimens and proposed by Carey et al (2020) and Wright (2019).

Migration begins in late Mar. Completion of migration by late May is discernible in the west, where summer residents are rare. Early for westerly locations were one in western Lincoln Co 6 Apr 2004 and another there 11 Apr 2017.

In the Panhandle, where the species is an uncommon migrant, there were only about 20 reports prior to 2015, when there were four more: one near Oshkosh, Garden Co 26 Apr, two at Ash Hollow SHP, Garden Co 16 May, four in Scotts Bluff Co 11 May, and one in Sioux Co 14 May. Migrants in the Panhandle are mostly if not all gray-faced birds sometimes referred to subspecies arenacea, although intergrades with more boldly-marked eastern pusilla are to be expected; singles identified as such were in Cheyenne Co 8 May 1998 and at Wind Springs Ranch, Sioux Co, 2 and 9 May 2001. A gray-faced bird was in McCook, Red Willow Co 25 Apr 2009.

Farthest west of recent reports along the Middle Loup and Dismal River Valleys are in Hooker Co 5 Jul 2011 and 28 Jul 2010 although singing males had been reported in Grant Co in 1984, a “new Sandhills locality” (Williams 1984).

Field Sparrows occupy nearly the entire area south of the Platte River Valley, with the exceptions of plains in Perkins, western Chase and northeastern Dundy Counties. Field Sparrows occupy the entire Republican River Valley west to Colorado. Numbers are high in southwestern Nebraska where it is present, including 250 in southeast Lincoln Co 5 Jul 1995 and 175 in Frontier Co 5 Jul 1995.

Earlier dates for the Panhandle may be of summering or local Hatch Year birds: 13 Aug 2017 Sheridan Co, and 17 Aug 2012 Kimball Co.

Dec and later dates east and central are discussed below (see Winter). Migration is generally completed by mid-Nov.

Until 2000 there were fewer than 30 fall reports from the Panhandle in the period 21 Aug-4 Oct; however, in recent years reports have increased, possibly due to the generally increasing numbers of Field Sparrows in the state (see Summer). Many, if not most, reports in the west are of grayer-faced birds; one was banded and photographed at Chadron SP, Dawes Co 18 Sep 2014, two were in Dundy Co 22 Sep 2012, and one was at North Platte SL, Lincoln Co 28 Sep 2012. 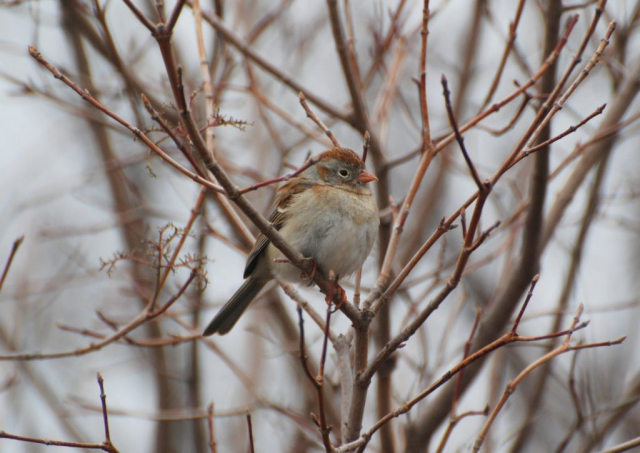