Red Fox Sparrow is the only one of the four that occurs in Nebraska (see Comments below regarding Slate-colored Fox Sparrow).

According to Pyle (1997), Red Fox Sparrow subspecies are zaboria, breeding from interior Alaska to central Alberta south to Northwest Territories and Manitoba, wintering from southern California to south Texas, north and east to Iowa and Georgia, and iliaca, breeding from northeast Manitoba and Ontario to Newfoundland, wintering from Michigan to Mississippi east to New Hampshire and Florida.

Pyle’s proposed placement of altivagans of interior British Columbia and southwestern Alberta, wintering California to Arizona, was either with the Red group or the Slate-colored group; recent genetic studies (Zink 1994, Zink and Weckstein 2003) confirm inclusion of altivagans in Slate-colored Fox Sparrow. There are no confirmed Nebraska records of altivagans and it is unlikely to occur in Nebraska based on its currently accepted range.

All Nebraska observations are of Red Fox Sparrow; it has been assumed that subspecies P. p. iliaca and P. p. zaboria migrate through Nebraska (Bent 1968; Pyle 1997). Both iliaca and zaboria Red Fox Sparrows winter in the southeastern US. Since zaboria breeds westward into Alaska, its migration route is southeastward on the northern Great Plains including Nebraska; it is only a rare migrant in northeastern Colorado (Andrews and Righter 1992). All Oklahoma specimens (>35) are zaboria (Joe Grzybowski, pers. comm.). Subspecies iliaca breeds west in Canada to the longitude of Minnesota, and winters with zaboria in the southeastern US. Thus, iliaca migrates southward and southeastward and could be expected to be less numerous in Nebraska than zaboria. In addition, intergrades might be expected to occur in at least eastern Nebraska. Field identification of these two subspecies in Nebraska is very difficult, with only extremes of rufous (iliaca) and gray (zaboria) plumages possibly identifiable, as suggested by Beadle and Rising (2003). Probable examples from Nebraska of such extremes are a grayish bird photographed in Dawes Co 13 Oct 2018 (Jorgensen 2018), a bird suggestive of zaboria picked up in Dodge Co 7 Nov 2005 and sent to UNSM, now ZM18334 (cited above), and reddish birds that are good candidates for iliaca, the specimen cited above (Documentation) which is a fresh, very reddish bird from Fontenelle Forest, Sarpy Co 5 Mar 2017 (Peterson 2017), and 25 Mar 2017 Dodge Co (Croshaw 2017).

Changes since 2000: Even though numbers observed in winter are variable, reports have increased in recent years including numbers recorded on CBCs (Figure 1); prior to winter 2009-2010 there had been only about 25 reports for Feb, but since then such reports have been numerous. During the winter of 2014-2015 at least 16 individuals were at 11 locations in the southeast. 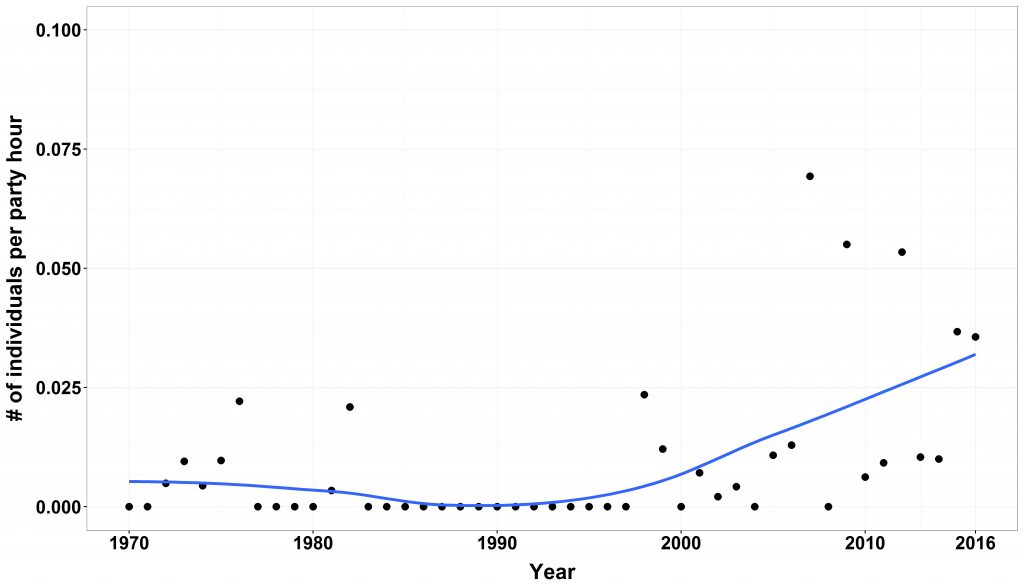 Migration is from late Mar through Apr; peak movement is in early Apr in the southeast, mid-Apr elsewhere.

There is one documented Panhandle report, a single grayish Red Fox Sparrow photographed in Morrill Co 18 Apr 2014. On the eastern Colorado plains, Fox Sparrow was listed as a rare migrant by Andrews and Righter (1992) and in eastern Wyoming it is a rare migrant, “presumably iliaca/zaboria” (Faulkner 2010).

Migration is from Oct through late Nov, with peak numbers in late Oct-early Nov, although fall departure is protracted, especially in the southeast, where a few overwinter.

Winter: Prior to the winter of 2009-2010, there had been only about 25 reports in Feb, indicating that overwintering was less than annual. Since then, however, this species has wintered increasingly in the southeast in good numbers. In 2013-2014 there were 12-13 birds reported at five locations through 22 Feb, and in 2014-2015 at least 16 individuals were at 11 locations in the southeast. Continuing the trend, in winter 2017-2018 there were an amazing 34 individuals reported Jan-Feb.

In winter 2021-2022, by far record numbers wintered in the east, the reports extending farther north and west than usual. A rather incredible 151 birds were reported Jan-Feb, compared to the previous high total for Jan-Feb of 34. Single observer-single location counts were topped by the 25 at Timber Point RA, Butler Co 27 Feb. The extent of wintering was defined by reports from Boyd Co 4 Jan, Wayne Co 5 Jan- 19 Feb (up to four), Stanton Co 10 Jan and 30 Jan, Merrick Co 11 Jan and 15 Feb, Kearney, Buffalo Co 9 Jan, and Harlan Co 21 Feb.

Comments: The occurrence of schistacea in Nebraska is based on the purported collection of a specimen (USNM A 5718) in southwest Nebraska 19 July 1856 (Deignan 1961), the location described as “Head of the Platte = south fork of the Platte River, about 25 miles east of the northeastern corner of Colorado, in Nebraska” (AOU 1957, Deignan 1961). The accuracy of this location is questionable for several reasons, as outlined in Silcock (2021). As suggested by Wright (2019), “it seems most plausible that the bird was mis-labeled or the date was misread”. Silcock (2021) presented a case that indeed the collecting locality of the specimen was almost certainly within its breeding range in the northern Medicine Bow Mountains in Wyoming between 7 and 25 August 1856 rather than in Nebraska on 19 July 1856. 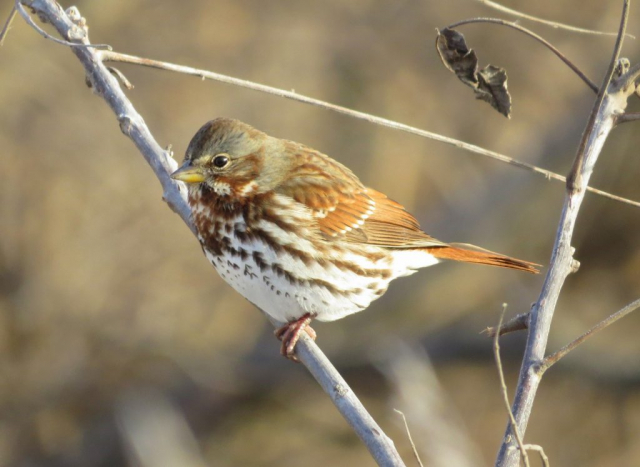 Baird, S.F., J. Cassin, and G.N. Lawrence. 1858. Reports of Explorations and Surveys to ascertain the most practible [sic] and economic route for a railroad from the Mississippi River to the Pacific Ocean [etc]. Vol. 9. Washington DC: A. O. P. Nicholson.