Taxonomy: There are six subspecies recognized, five in Eurasia and one, canadensis, in North America and far northeast Russia.

Last dates above are from the east and east central; most are non-breeding immatures drifting westward from easterly wintering locations.

Currently Golden Eagles breed throughout the Panhandle, west of the Sandhills. In 2007, 20+ nests were located in the Panhandle. As late as the 1980s, Golden Eagles nested further east, in Chase, Keith, Garden, Lincoln, and Hayes Cos (Busch 1979; Bennett 1973, 1975, 1986; Rosche 1994; Brown and Brown 2001; NGPC unpublished data). A comparison of the spatial distribution of nesting records from the 1970s and 1980s with the 2000s (NGPC, unpublished data) suggests the breeding range has continued to erode to the west in the Panhandle. However, Molhoff (2016) reported recent confirmed nesting in south-central Garden County and eastern Cheyenne County. Suggestive of a resident pair and possible recent breeding in Keith Co were two adults there 11 Aug 2007 (Stephen J. Dinsmore, personal communication). Similarly, sightings near Nenzel, along the Niobrara River in northern Cherry Co, are suggestive of breeding; there were sightings there 13 Jun and a pair was present 22 Jun 2002, and, earlier, an adult was near Springview, Keya Paha Co 25 Jul 1999 and a single was in Thomas Co 17 Aug 2014. In 2022, near Spencer, Holt Co a pair of adults was present 24 and 25 Aug.

Early dates above are away from the breeding range. There is a gradual drift eastward in fall, mostly of immatures, which may begin dispersing in late Aug (Wheeler 2003).

Fall sightings in the east occur every year; the Hitchcock Nature Center Hawk Watch in western Pottawattamie Co, Iowa, averages 19 Golden Eagles per year, with a poorly defined peak from late Oct through Nov. Padelford and Padelford recorded Golden Eagles in the Missouri Valley 28 Sep-9 Nov in three of five years in the early 1990s. 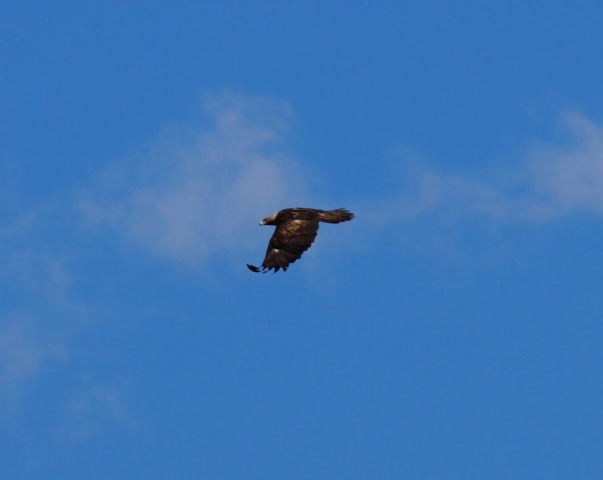