The above range descriptions suggest that both subspecies might occur in Nebraska, ruficrissa perhaps restricted to the Pine Ridge and the extreme western North Platte River Valley. Although there are no confirmed records of breeding on the Pine Ridge, Faulkner (2010) showed Gray Catbird, subspecies ruficrissa, summering over most of Wyoming, the northwest Panhandle of Nebraska, and the southwest corner of South Dakota. Faulkner (2010) stated also that catbirds in Wyoming are most common in “lowland cottonwood riparian corridors”, including the North Platte River Valley. Thus, eastern and western birds may meet there, and, if so, catbirds in the western North Platte Valley in Nebraska are probably intergrades of the two subspecies. The subspecific identity of catbirds recently reported on the Pine Ridge is unknown.

In the Panhandle and western Sandhills, where the species is rare or absent in summer, migrants are reported mostly in the second half of May, about a month later than in the east.

Remarkable for both age and origin of the bird, one captured in Sarpy Co 15 May 2002 by Ruth Green had been banded as a hatch-year bird in Rhode Island in 1991 (Silcock 2002).

On the Pine Ridge, Rosche (1982) noted that while it “presumably breeds” in the northwest, there was no definite evidence, despite several prior summer reports for Sioux, Dawes, Scotts Bluff, and Garden Cos. It may have been more numerous on the Pine Ridge formerly, as suggested by Bruner et al (1904) and Rapp et al (1958), and the statement by Rosche (1982) that “It was probably more common formerly when destruction of riparian habitat was less extensive”. There were 11 additional records of “Possible” or “Probable” nesting 2009-2014 (Mollhoff 2016), indicative of an increase in summering numbers there, as well as these additional recent reports: singles were at Ponderosa WMA, Dawes Co 10 Jun 2015, Chadron SP, Dawes Co 11 Jun 2015, Fort Robinson SHP, Dawes Co 20 Jun 2011, and one was at Chadron SP, Dawes Co 19 Jul 2012.

In the North Platte River Valley, nesting was first recorded in Keith Co in 1984 (Johnsgard 1990); the species was only a migrant prior to then (Rosche and Johnsgard 1984). Rosche (1994) indicated that regular breeding occurs westward to Sutherland, Lincoln Co and Paxton, Keith Co, and it was a “common breeder” in the Lake Ogallala area in Keith Co by the 1990s (Brown et al 1996). Mollhoff (2016) showed confirmed breeding at Ash Hollow SHP, Garden Co. Currently, there are several Jun-Jul reports west to Scotts Bluff Co without evidence of nesting; one in a yard south of Gering 10 Jul 2010 was “a surprise” (Alice Kenitz, personal communication).

South of the Platte River Valley, breeding is common west to Hitchcock Co, although there is only one Jun-Jul record for Dundy, Perkins, and Chase Cos, that at Grant, Perkins Co 5 Jun 2000.

Some small-scale loose grouping may occur by late Jul; 24 were in Lancaster Co 21 Jul 2006. Migration begins in mid-Sep and ends by early Oct in the Panhandle, and by late Oct in most of the state.

While there are several Nov reports in the east, Dec-Feb reports anywhere in the state are few, and there is only one documented record for Mar. All of the 15 reports except two are from the Platte and South Platte River Valleys southward; the exceptions are one at James Ranch, Sioux Co 4 Jan 2000 and one at a location in Madison Co 9-28 Dec 2021. 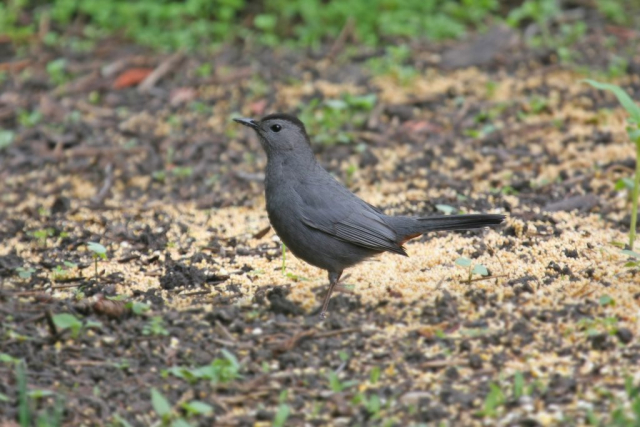