Taxonomy: Two subspecies are recognized (Pyle 1997): aliciae, breeding from Alaska to northern Alberta and Labrador, and minimus, breeding in Newfoundland and northeast Quebec.

Migration is in May.

Although there are several reports of Gray-cheeked Thrush in the heavily-birded Colorado Front Range (eBird.org), we consider most of the 35+ Panhandle reports inconclusive. According to eBird (eBird.org), there are only two Panhandle records: one banded at Cedar Point Biological Station, Keith Co 15 May 1997 and one photographed near Potter, Cheyenne Co 21 May 2020.

Spring 2015 saw numerous reports, involving a total of some 26 individuals, west to Hamilton Co, where one was found 14 May. There were an amazing 40+ reports of at least 50 individuals in 2016, including counts of 10-11 at Fontenelle Forest, Sarpy Co 13-14 May, and about 48 reports of different individuals in 2020, including one in the Panhandle.

This species is said to migrate later in spring than any other Catharus thrush except Bicknell’s Thrush (Whitaker et al 2020), although Nebraska data do not support this.

This species is far less numerous in fall, despite its wider distribution at that time. A possible explanation for this may be inferred from a study on Swainson’s Thrush by Ruegg and Smith (2002), which, due to an artifact of late Pleistocene glaciations, evolved an elliptical migration pattern that largely avoids the central USA in fall (see Swainson’s Thrush account). Ruegg and Smith (2002) suggested that other Catharus thrushes, including Hermit and Gray-cheeked, may have evolved the same pattern. 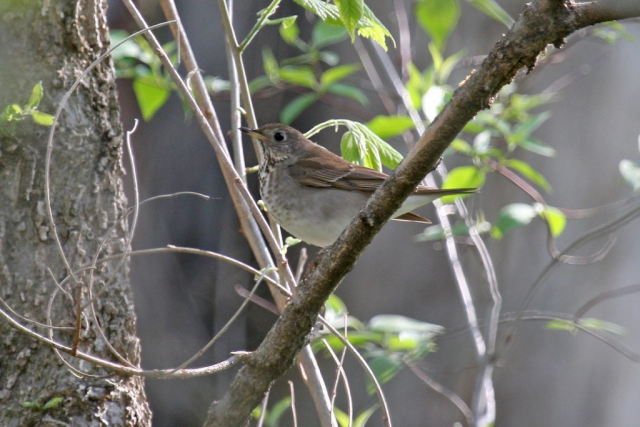 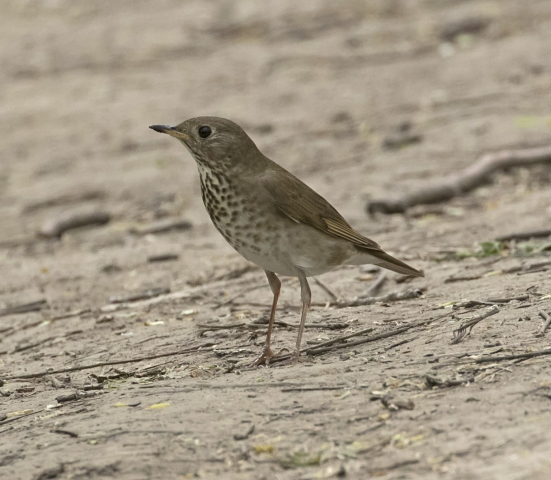 Ruegg, K.C., and T.B. Smith. 2002. Not as the crow ﬂies: A historical explanation for circuitous migration in Swainson’s thrush (Catharus ustulatus). The Proceedings of the Royal Society of London B 269: 1375–1381.