Taxonomy: In its native Western Palearctic, there are at least seven subspecies (Madge and McGowan 2002); North American introductions were of several subspecies and existing populations are considered of mixed derivation (AOU 1957), but most are probably of the European subspecies P. p. perdix (Carroll et al 2020).

Resident: The first population to become established, or at least augmented, was by natural expansion from South Dakota into the north-central part of the state (Carroll et al 2020, Vander Zouwen 1990), especially Boyd and northern Holt Cos (Mathisen and Mathisen 1960), and probably also Knox Co (Rapp et al 1958).

Several attempts had been made to establish this species in various parts of Nebraska, beginning as early as 1925-26, but none appeared to have been successful (Glandon 1936, Viehmeyer 1942, Mathisen and Mathisen 1960, Rosche 1982). However, Mathisen and Mathisen (1960) noted there had been recent sightings in Cedar Co, near Merriman in Cherry Co, and on the Niobrara River south of Gordon, and concluded that “It is likely that small, isolated colonies persist from Wayne County west to Crawford in Sioux County”. Whether any of these persisted, especially those west of Antelope Co, is unknown, although there are recent reports from Sioux Co (below).

Gray Partridges occur as of 2022 primarily in a “small area” in northeast and north-central Nebraska, although abundance and overall numbers are variable (Mollhoff 2016, 2022). Hunter harvest peaked in 1987 at over 11,000 birds, but since 1996 the highest years have been 1534 birds in 2006 and 1208 birds in 2014 (NGPC data). The 1987 hunter harvest peak corresponded with a major spike in numbers in the 1980s, when birds were reported from several counties west and south of the core northern and northeastern range (Vander Zouwen 1990). The Nebraska Breeding Bird Atlas (Mollhoff 2001) reflected this extensive range during 1984-1989; “Probable” breeding was reported west to Dawes and extreme northeast Sheridan Co, breeding was confirmed in central Cherry Co, and the remaining reports were in northeast Nebraska, bounded by Boyd, Wheeler, Boone, Cuming, and Washington Cos. A nest discovered near West Point, Cuming Co 15 Jun 1980 (Einemann 1980) remains the only documented record of breeding for the state (Mollhoff 2022).

By the 1990s, numbers were low and reports few, all within the area bounded by Boyd, Holt, Antelope, Wayne, and Thurston Cos, until about 2005; subsequently there was an increase in reports in this core range. In 2010, for example, at least two pairs were south of Creighton in northern Antelope Co 14-19 May, and several broods were noted later in the summer: two adults with at least 10 young each in the Wausa, Knox Co area, a pair with seven young near Laurel, Cedar Co 6 Aug, and an adult with nine young near Creighton 9 Aug, the observer’s first breeding record for more than 10 years in Knox Co.

Numbers declined again subsequently; the observer of one on a BBS route near Winnetoon, Knox Co 5 Jul 2016 noted “it has been several years since I have found Gray Partridge in Knox County”, and the sighting of a pair with six young near Laurel, Cedar Co 22 Jul 2016 was “the first time I have seen Partridge in this area for over 10 years”. Reports were few in 2019 although increasing somewhat in 2020; rare reports in Wayne Co were one on 1 May 2019, two on 11 Jul 2020, and 1 May 2022. Elsewhere in 2019 there were two reports in Knox and Cedar Cos May-Jun, but reports increased in 2020, with 12 reports in Knox and Cedar Cos May-Aug, including reports of 1-2 birds at four locations near Fordyce, Cedar Co 23 Apr-24 May, 14 in Knox Co 18 Aug and one of few recent records for Boyd Co, 11 on 9 Aug along 894 Road. One in northwestern Pierce Co 2 Jun 2021 suggested a possible increase in the range.

Away from the core range, reports from the northwest are notable, most from Sioux and Scotts Bluff Cos. Sioux County birds may have descended from releases by local hunters, or they may be derived from releases by the Wyoming Game and Fish Department which has established a population along the North Platte River near Huntley, Wyoming (Greg Johnson, pers. comm.). The range in Wyoming extends to the extreme northwest corner of Sioux Co (Faulkner 2010), and so its presence may not be unexpected there. Between the first South Dakota Breeding Bird Atlas in 1988-1992 and the Second in 2008-2012, Gray Partridge has appeared in three counties adjacent to Nebraska in extreme southwest South Dakota (Drilling et al 2018). Small flocks of this species occur in Sioux Co; there have been several sightings around Wind Springs Ranch in southern Sioux Co, and also in west-central Sioux Co (Helen Hughson, pers. comm.). The Wind Springs Ranch flock was still present in 2012, when five were seen 15 Nov, and there was a recent sighting in early 2017 (Helen Hughson, pers. comm.). In Scotts Bluff Co, five were seen 15 Feb 2006, and two were along Rifle Sight Road, 6 May 2000. High counts were a flock of 12 in a Sioux Co rancher’s yard 8 Aug 2001 (Helen Hughson, pers. comm.) and a flock of 20 on the Frimann Ranch in southeast Sioux Co 7 Oct 2003 (Alice Kenitz, pers. comm.).

Small numbers may have persisted elsewhere in northeast Nebraska into the late 1990s and early 2000s. In Loup and Garfield Cos, seven were reported on the 1994-95 Calamus-Loup CBC. In Dodge Co, one was reported northwest of Fremont 29 Mar 1999, six were flushed in the same county 19 Feb 2000, and 16 were near Ames 8 Nov 2003. There are sporadic reports from counties further south, the most recent of two in Hamilton Co 21 Jul 2005; most if not all such southerly reports are probably birds released for hunting or dog training (see Comments).

In winter, flocks of as many as 100 individuals have been seen working grain stubble fields. Although normally sedentary, when heavy snow cover exists this species may migrate considerable distances (Cramp and Simmons 1980). This may explain entry of a few birds into Nebraska from South Dakota as well some of the more southerly isolated Nebraska reports, such as Blair, Washington Co in the Missouri River Valley, when winter flocks of up to 20 birds were noted in the 1980s.

Comments: Gray Partridge and similar species (Chukar Alectoris chukar, Red-legged Partridge Alectoris rufa) are routinely purchased from suppliers and used at Controlled Shooting Areas, where farm raised birds are released for sport hunting, hunting dog training, and trials. Released birds that survive may be the source of many reports of Gray Partridge away from the primary range. Gray Partridges are also called Hungarian Partridges. 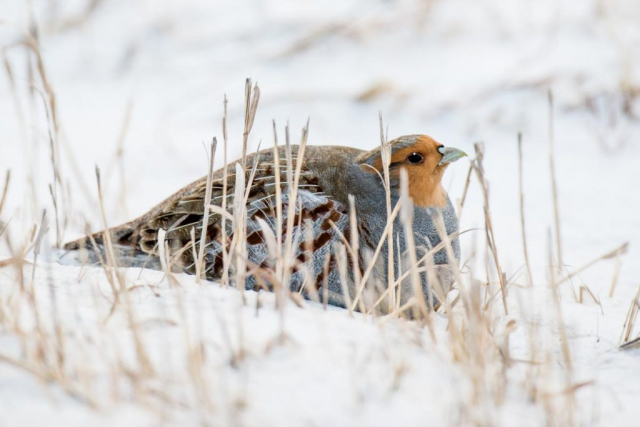 Cramp, S., and K.E.L. Simmons, eds. 1980. Handbook of the birds of Europe, the Middle East, and North Africa; the birds of the western Palearctic. Vol. 2, Hawks to Bustards. Oxford University Press, London, England.