Most breeding Great Blue Herons in Nebraska, according to Vennesland and Butler (2020), are wardi, although some intergradation might be expected in northern Nebraska.

Older records relied on taxonomic assignments that are currently not valid; it has, for example, been thought that Nebraska had only two records of wardi: one collected 18 Aug 1914 at Inland, Clay Co (Brooking, Notes), probably a post-breeding wanderer, and another reported from Frontier Co (AOU 1957). Another example is Swenk’s (Notes Before 1925) report of two specimens of herodias in the Black collection that approached wardi in size, suggestive of some intergradation; under current taxonomy, these were probably indeed wardi.

Spring: Most years, wintering birds make spring arrival difficult dates to determine, but there is a noticeable increase in numbers around the spring thaw, typically in late Feb-early Mar. Males arrive early at rookeries, such as those standing on nests at Sutherland Reservoir, Lincoln Co by 26 Feb 2006, Franklin Co by 4 Mar 2012, and Lake Ogallala, Keith Co 6 Mar 2016. Nine at Harlan Co Reservoir, Harlan Co 22 Feb 2004 may have been early migrants.

Summer: This species breeds statewide in colonies containing up to 100 or more nests, although most contain around 10 nests. A large colony in Dawson Co, near Interstate Highway 80, had 90+ nests 11 May 2002 (Mollhoff 2004), and one in Cass Co had 94 nests 23 Mar 2011. Ducey (1988) indicated breeding records since 1960 in 30 counties statewide. In 2001, at least 20 active colonies were known to be distributed across the state; previously, several were in the Keystone Lake, Lake McConaughy area (Brown et al 1996, Rosche 1994), and, in 1994, Rosche located 9 rookeries with 81 nests in Webster, Harlan, Hitchcock, Cheyenne, Kimball, Sheridan, and Sioux Cos.

A group of seven nests in power transmission lines in Sarpy Co in 2003 was removed due to the potential for the birds’ droppings causing power outages (Omaha World Herald). Entire colonies of incubating adults have been recorded as late as 18-20 Jul, suggesting either late nesting or re-nesting attempts.

Fall: In late summer, most conspicuously in Jul, post-breeding mixed-age flocks begin to form, probably including birds from further north as well as local post-breeding wanderers. Such late summer flocks include 147 in Hall Co 22 Jul 2020 and 85 at Jack Sinn WMA, Lancaster Co 22 Jul 2012. Non-point counts include 125 were along the Missouri River Valley in southeast Nebraska 25 Jul 2010, and 60 in the eastern Rainwater Basin 24 Jun 2005.

There is no clear fall movement, although about half of departure dates fall in Oct, and most Great Blue Herons are restricted to the Platte River Valleys and southward by Dec.

Returns from juveniles banded in Nebraska indicate that most migrate directly south during winter periods into Oklahoma, Texas and Mexico.

Winter: Although there are winter records statewide, overwintering is essentially limited to the Platte and North Platte river valleys, with reports there less than annual Jan through mid-Feb. Regular sightings occur near Lewellen and below Keystone Lake along the North Platte River (Rosche 1994), where 17 were present 1 Jan 2017, and 15 on 29 Jan 2000; 15 were at nearby Sutherland Reservoir, Lincoln Co 2 Jan 2015. During periods of severe winter weather, all birds probably leave the state. 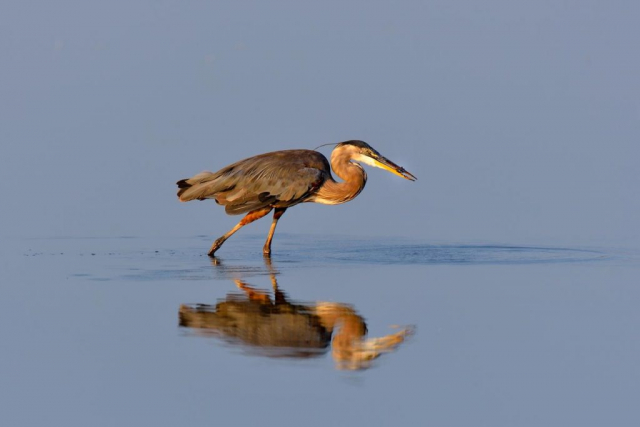 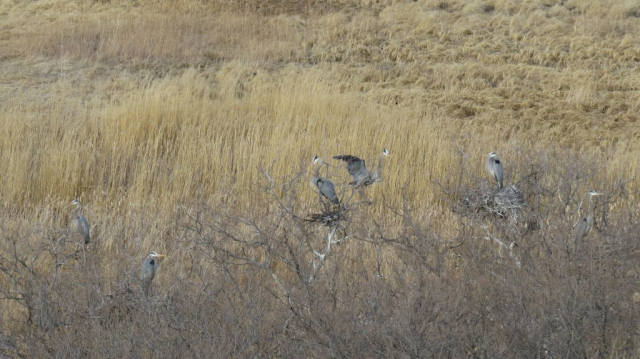