Migrants are most numerous in the Missouri River Valley. Arrival is in late Apr, and peak migration mid-May. Arrival is later in the Panhandle, in mid-May.

Summer: Bruner et al (1904) considered Great Crested Flycatcher a common summer resident only along the Missouri River and its larger tributaries in the east; Rapp et al (1958) noted that it occurred as far west as Keith and Logan Cos. The breeding range expanded westward during the 20th Century along river valleys as riparian woodlands have spread westward and matured. The expansion has continued into the 21st Century. Currently Great Crested Flycatcher occurs statewide, with highest densities in the east, and lowest numbers in the west, where it is limited to extensive wooded riparian areas on the Pine Ridge, along the Niobrara River Valley, North Platte River Valley west to Scotts Bluff Co, Loup drainage west to Thomas Co, South Platte River Valley, and Republican River Valley.

It is common in the Niobrara River Valley west to at least eastern Cherry Co (Brogie and Mossman 1983), occurring only in small numbers further west, although 36 were tallied at Anderson Bridge WMA, Cherry Co 8 Jun 2022. One of few records west of Nenzel along the Niobrara River was a male in breeding condition collected 5 Jul 1964 south of Rushville, Sheridan Co (Short 1965); another was near Rushville 3 Jun 2014, and at Smith Lake WMA, Sheridan Co two were present 14 Jun 2016 and two on 10 Jun 2021.

Great Crested Flycatcher is fairly common on the Pine Ridge; it was considered a rare migrant and local summer resident in the northwest as recently as the early 1980s (Rosche 1982), where it had occurred as a migrant since 10 May 1953, and in summer since 18 Jun 1961.

This species occurs regularly in the North Platte River Valley west at least to Keith Co, but west of there since 2000 there have been only about 13 reports 5 Jun-9 Jul. There are only about 10 records for Wyoming (Faulkner 2010)

It summers along the South Platte River Valley to Colorado, where it was first reported in the 1970s and bred in the late 1980s (Andrews and Righter 1992), and throughout the Republican River Valley. Numbers decline westward along the Republican, but there are several reports west to Dundy Co.

Migrants begin southward movement by the end of Aug, most departing by mid-Sep.

Even though it breeds in the Pine Ridge, there are only about 20 fall reports in the Panhandle away from breeding areas; migrants tend to move southeastward in fall to northeastern Mexico (Miller and Lanyon 2020). 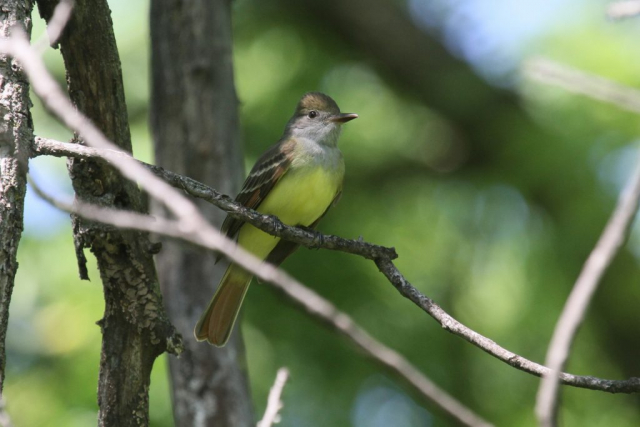