Taxonomy: Three subspecies are recognized (Pyle 2008): cupido, the extinct Heath Hen, attwateri, surviving in coastal Texas only with extensive conservation efforts, and pinnatus, the subspecies occurring in Nebraska and the northern Great Plains and Midwest.

Some authors (Johnsgard 1979; Sibley and Monroe 1990) have considered this species and Lesser Prairie-Chicken (T. pallidicinctus) conspecific. See Sharp-tailed Grouse for discussion of hybrids with that species.

Changes since 2000: Population increases and range expansion observed in southeast Nebraska in the late 1990s and early 2000s, apparently in response to increased land set aside in the Conservation Reserve Program (CRP; Rodgers and Hoffman 2005, Scott Taylor, NGPC, personal communication) tended to be reversed as grain commodity prices subsequently increased and CRP land returned to row-crop agriculture (Jeffrey Lusk, NGPC personal communication). Population increases in southeast Nebraska and elsewhere possibly led to some range expansion, such as in the Rainwater Basin, where small numbers were observed at and around grassland tracts associated with wetland conservation properties. Reduced vertical structure such as trees and farmsteads in the landscape concomitant with agricultural intensification may also have benefitted the species (Jorgensen 2012).

Resident: Highest densities occur in north-central Nebraska, especially eastern portions of the Sandhills, and decline to the east, south and west where the range becomes discontinuous. Isolated portions of the species’ range are generally associated with landscapes of grassland located within regions of intensive row-crop agriculture. Despite reduction in CRP acres and grassland, Greater Prairie-Chicken numbers appear to be stable or increasing. BBS trend analysis shows an annual increase of 6.79% (95% C.I.; 2.36, 11.45) during the years 1966-2015 (Sauer et al 2017).

In northeast Nebraska, there is a long-standing population in central Cedar Co, and small numbers occur as far east as Buckskin Hills WMA, Dixon Co, where at least two leks have been active since at least 2003; peak count there is 24 in 2009. The range also includes most of Antelope Co and extends eastward to southwestern Pierce Co, where 29 were on a lek on 543 Road 2 Apr 2022, northwestern Madison Co to the Battle Creek area, and northwestern Boone Co, where 254 were tallied 29 Dec 2019 (Jason Thiele, personal communication). One was in southeastern Wayne Co 18 Apr 2019, presaging reports in 2020 and 2021 in the Elkhorn River Valley in Stanton Co; at Wood Duck WMA, one of 11 near Wood Duck WMA, Stanton Co 3 Apr 2020 was displaying and four were there 8 May, and in 2021 booming was heard there 15 May. Three miles southeast of Stanton, Stanton Co booming was heard 6 May 2021. Unexpected was one displaying on a gravel road southwest of Scribner, Dodge Co 17 Apr (Amanda Johnson, pers. comm.). Further south, small numbers occur in an area of sand hills southeast of Genoa, Nance Co; one was seen in extreme southwest Platte Co 20 May 2007 and 1-3 were booming in Platte Co 4-11 Jun 2009.

South of the Platte River this species occurs east to Adams and Webster Cos, but east of there its habitat is localized, and distribution is discontinuous. There are no reports for Gosper Co, but two were booming in Furnas Co 5 May 2009. Further east, there are reports from isolated Sandhills remnants, such as south of Atlanta in Harlan Co, and two miles west of Holstein and southeast and southwest of Lowell in Kearney Co. This area is just north of the species’ north-central Kansas range, which is separate from the well-known Flint Hills population (Busby and Zimmerman 2001).

Jorgensen (2012) presented evidence that this species had been extirpated as a resident in the eastern Rainwater Basin in the 1930s, but since then prairie-chickens have colonized and persisted at isolated grassland tracts, including those on wetland conservation properties where trees and brush have been removed. Since 2005, leks have been established at Harvard WPA and Hultine North WPA, both in Clay Co, Prairie Dog WPA, Kearney Co, and in Fillmore Co around Brauning WPA, near Rauscher WPA and at Wilkins WPA; best count at these locations was 22 at Hultine North WPA in 2005 and 2008. In extreme southwest Fillmore Co, 15 were seen along Highway 74 on 9 Apr 2017. The first lek in York Co for many years was at Kirkpatrick Basin South WMA, with two males there 18 May 2007 and two on 12 May 2008. One bird at Marsh Duck WMA, York Co 13 Feb 2017 was the first sighting there, and there were further reports in 2017 at locations where breeding has not occurred: four were at Funk WPA, Phelps Co 10 Jul, and one was reported at Straightwater WMA, Seward Co 2 Jun; one was in the same area in 2018, near Tamora, Seward Co 14 Apr (Dubry-Garcia 2018).

Perhaps related to the establishment of new leks in the Rainwater Basin discussed above was formation of a new lek on Mormon Island, Hall Co in 2015, possibly as a result of “well above average winter temperatures” (Andrew Caven, pers. comm.), that has continued since with up to 30 males present and all activities of full displays expected at a permanent lek being observed (Caven et al 2018). As the number of males increased, the lek split, forming multiple leks (Andrew Caven, pers. comm.). Nearby sightings in Apr 2020 and 2021 include a small lek of 5-6 birds on Shoemaker Island, Hall Co in Apr 2020 and 2021 and a few birds lekking in another pasture there (Andrew Caven, pers. comm.).

The Mormon Island lek discussed above was occupied by males beginning 30 Jan in 2015, more than one month prior to the typical start of the lekking season in Nebraska and what has generally been published for the central Great Plains (Caven et al 2018). Further, consistent lek attendance for both sexes, as well as male display behavior, was extended, compared with published data, through 13 May in 2015 (Caven et al 2018). This early and extended lekking season may be a consequence of extended periods of mild winters; it is possible that warming trends may alter the lekking phenology of Greater Prairie-Chickens with unknown impacts (Caven et al 2018).

In the southeast, as of spring 2017, there are four disjunct areas in several southeastern counties where native grasslands persist or have been planted to grassland under the CRP (Mollhoff 2016): (1) Jefferson and southwestern Gage, (2) eastern Gage, Johnson, Pawnee, and Richardson, (3) southeast Butler and adjacent portions of Saunders and Lancaster, and (4) southwest Lancaster. The populations in these areas may represent the northern range extent of the larger populations present in the Kansas Flint Hills. Recent reports from Jefferson Co are few and include booming heard at Rock Glen WMA 8 May 2012. The center of the southeasternmost population is Pawnee Co, where numbers peaked at 41 on a long-standing booming ground at Burchard WMA 7-9 Apr 2017. In recent years small numbers have occurred in extreme southeastern Butler Co; two leks with a total of 15+ birds were found 10 Apr 2010, and as many as 15 were on a lek at 25th and U Roads 10 Apr 2016, 16 were there on 21 Mar 2017, and 14 on 11-12 Apr 2022. A survey of six previously known lek sites in southeastern Butler Co 13 Apr 2019 by Joseph Gubanyi found two occupied by a total of at least 18 birds. There is a population at Audubon’s Spring Creek Prairie and neighboring private grasslands south of Denton, Lancaster Co: as many as 17 have been seen since 2000, those on 8 Oct 2002, and breeding was documented there in 2002, 2003, and 2010.

The only recent report in the southeast away from these disjunct populations is of lek with four birds in southern Cass Co at the junction of Highways 50 and 34 on 13 Apr 2006 and, more recently, one was seen 3 mi west and 0.5 mi north of this junction 3 Jan 2020 (Josiah Dallmann, pers. comm.).

Although generally thought to undergo only local movements except on occasion in winter (Johnson et al 2020; see Winter), a recent telemetry study (Vogel et al 2015) found that a female that had been translocated from Chase Co, Nebraska to Grand River Grasslands, Ringgold Co, Iowa, subsequently travelled 3988 km into parts of four neighboring states 5 Apr 2013- 20 Jun 2014. The longest daily movements occurred in the spring periods during this period. It was suggested (Vogel et al (2015) that translocated birds move greater distances than local birds, probably due to unfavorable social interactions between lekking females and searching for mates at different lek sites.

Winter: This species has a propensity to move southeastward during severe winters, although as habitat has become fragmented throughout the range, this propensity has declined (Johnson et al 2020). In Nebraska, such movements have not been observed since winter 1983-1984, when there was an influx into Polk Co mid-Dec through 9 Jan, including a flock of 100 on the York-Polk Co line three miles from Benedict (Morris 1984). A large flock of 37 was at Mormon Island Crane Meadows, Hall Co 14 Feb 2018; this location is not far south of the nearest breeding locations in northwestern Hall Co and adjacent Buffalo Co and suggests at least occasional winter visits to the Crane Meadows.

The role and possible effects of winter movements as they relate to the history of Greater Prairie-Chicken in Iowa was discussed by Dinsmore and Dinsmore (2020).

Comments: The distribution of this species in Nebraska has changed over the past 150 years with the distribution of cropland in the state. It is not at all clear what the pre-settlement distribution of Greater Prairie-Chicken was in Nebraska but judging from habitat requirements and early accounts from Iowa and Illinois (Bent 1932), it is likely the species was present in the mid- and tall-grass prairies of extreme eastern Nebraska. What is clear, however, is that as European settlement progressed westward beginning in the 1850s, and as croplands mixed with grasslands, Greater Prairie-Chicken numbers increased dramatically, a phenomenon experienced earlier and described by pioneers in Illinois and Iowa (Bent 1932). Two hunting parties based in Omaha shot 422 and 287 prairie-chickens 6 Sep 1865, and in 1874-1875 shipments of birds to markets in New York and Boston totaled at least 100,000 (Swenk 1936). It is likely that numbers in Nebraska peaked in the 1880s.

Subsequently, numbers decreased as tallgrass prairie was almost completely converted to croplands. It has been suggested that the general increase in the Greater Prairie-chicken’s range and numbers in eastern Nebraska since the 1980s is a consequence of the increasingly mosaic nature of agricultural areas there as CRP fields and smaller farms such as “hobby” farms become more widespread, in effect mimicking (in the reverse direction) the mid-late 19th century era of westward expansion of small grain-growing farms into prairie areas (Thomas Labedz, pers. comm.). Two were in southeast Washington Co 26 Aug 2010 and one flushed from a Dodge Co cornfield 2 Apr 2010 was the observers’ first for the county.

Since about 2004 there have been increasing observations of leks in row-crop fields rather than the usual grasslands in counties where there had been no recent reports of the species. Reports in 2004 were of a group of 10-15 males in a cornfield adjacent to grassland in Lincoln Co 17 Mar, 16 birds, including a female, in a central Fillmore Co cornfield with no nearby grasslands 24 May, and 30-35 birds in a wheat field planted to corn in Franklin Co 23 Mar; there was a report from northwest Nuckolls Co in 2007. 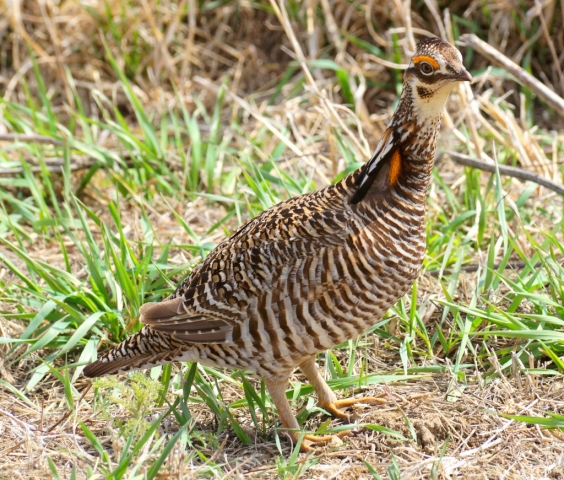 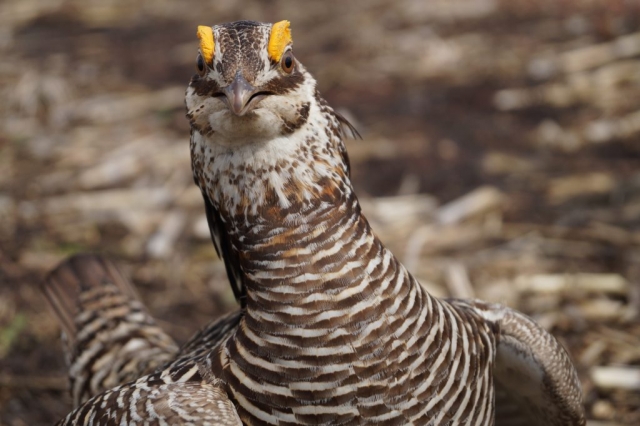 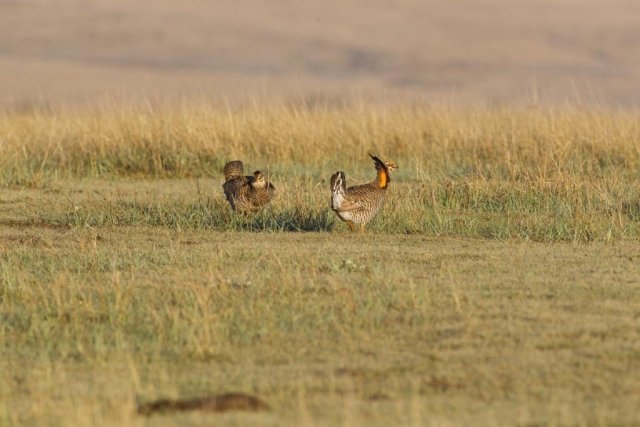 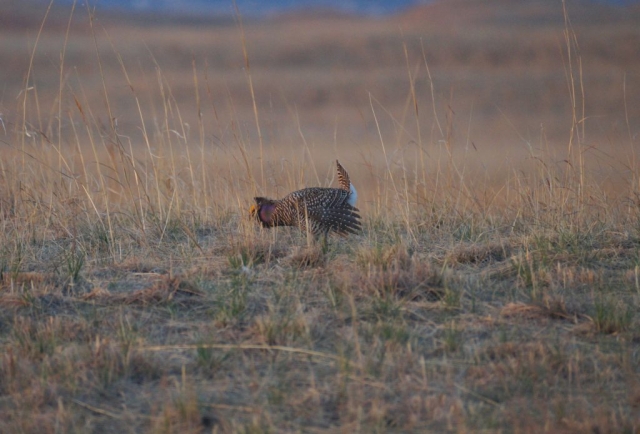