Winter: There are six accepted records.

about 1901 Platte River near Grand Island (cited above)

The 1901 record was a specimen, HMM 2499, on display at HMM, that “was purchased from Fred Johnson, whose father shot the bird” (HMM data). Swenk (Notes Before 1925) stated that “one killed by a farmer on the Platte River a little west of Grand Island, Hall Co, about 1901, and mounted by Mr. J.O. Hasty, the Arapahoe taxidermist, is now #2499 in the A.M. Brooking collection at Hastings”. Brooking (Notes) stated that “One obtained of Eric Johnson (male) whose father shot on Platte near Doniphan about 1901”. Taken as a whole, we believe the provenance of this specimen is reasonably proved.

Another specimen was taken at Calamus Reservoir 6 Nov 1992 and is a mount in the Nebraska Game and Parks offices at Pierce (Jorgensen 2003).

The reports for 21 Nov 2001 and 12 Nov 2006 were by Scott Wessell, an NGPC biologist; the 2001 record was seen while hunting (fide Mark Brogie), and the 2006 record was of four birds that flew in and landed and were carefully observed.

An immature male was found and photographed at Summit Lake SRA 23 Dec by Brian Peterson and seen subsequently by many; it moved from the lake to an open overflow channel, where it remained until 4 Jan (eBird.org, accessed April 2018). The photograph above is of this Summit Lake SRA bird, taken 2 Jan 2018.

Harlequin Ducks, presumably from the eastern population, “occasionally appear on the Great Lakes” in winter (Baldassarre 2014) and are a likely source for Nebraska birds. 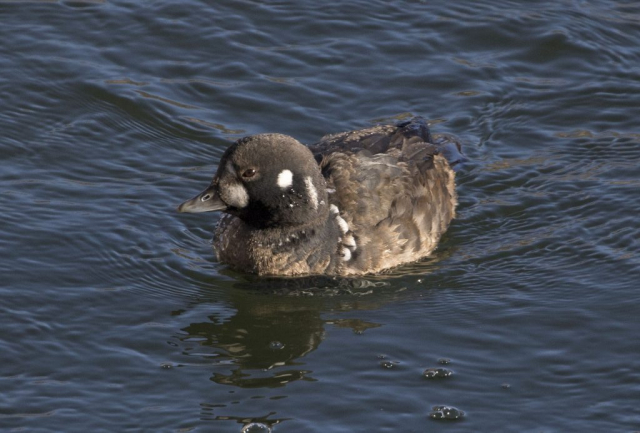