Taxonomy: There are two subspecies, harrisi of southwest United States south to Colombia, Ecuador and Peru, and unicinctus of Colombia and Venezuela south to northern Argentina and Chile (Gill and Donsker 2017).

Nebraska records are presumed to be of harrisi; northward vagrancy of unicinctus is unknown.

Spring: There is one record. Based on its non-banded status and plumage differences (fide Mark Brogie), this bird was not the same as the one banded at nearby Offutt AFB the prior fall.

Fall and Winter: There are seven records:

Comments: The photographs of the two records in 2017 did not allow determination of whether the same bird was involved, although the subsequent presence of a Harris’s Hawk in northeastern Kansas 27-29 Nov is strongly suggestive of a single bird making its way south from Knox Co. There were no other northerly sightings on the Great Plains that might have indicated a general northward dispersal movement.

The 1922 specimen cited above was shot by a hunter “while he was shooting ducks in a blind at Elkhorn, Douglas Co. It was mounted in Omaha and secured by Mr. A.M. Brooking for his collection, where it is #2895” (Swenk, Notes Before 1925).

This species regularly occurs from central Texas southward. Of the states surrounding Nebraska, only Kansas has records, seven in the period 17 Nov-7 Jan, plus a spring breeding record in Meade Co (Thompson and Ely 1989). Lending credibility to the Nebraska record in early 1995 was the appearance during winter 1994-95 in Oklahoma, Kansas, and Colorado of several Harris’s Hawks; three in Oklahoma and one in Kansas were observed beginning 26 Oct and were seen through 21 Jan (Grzybowski 1995), and two were in Colorado 17 Dec-4 Feb (Kingery 1995). Another 1995 record was of one in Columbia, Missouri, Feb 1995 that was photographed and the record accepted by the Missouri Records Committee; it may have been there for several months (Mark Robbins, pers. comm.). Harris’s Hawks are commonly kept as falconry birds and occasionally escape. Any Harris’s Hawks observed in Nebraska should be closely scrutinized, especially for the presence of jesses. 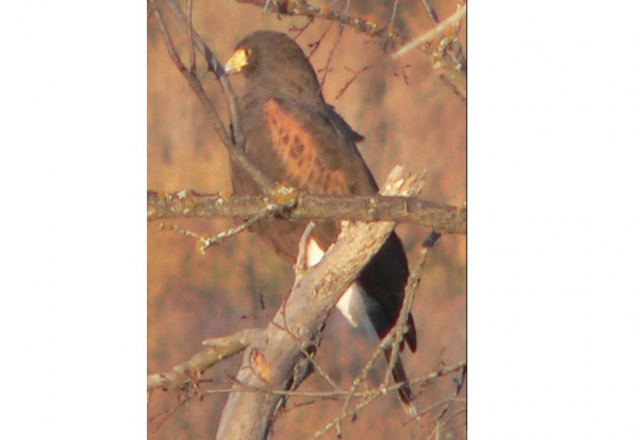