Taxonomy: This species and Baird’s Sparrow were moved to a new genus, Centronyx, from Ammodramus, based on genetic studies that indicated former Ammodramus was paraphyletic (Chesser et al 2018).

Bruner et al (1904), regarding a specimen collected in Lancaster Co 22 Apr 1899 (UNSM ZM 7332), related that it was identified as occidentalis by Oberholser; this taxon has been merged with henslowii.

In addition to the specimen cited above, there are additional specimens UNSM ZM7333 and ZM7334 taken at Lincoln 26 Apr 1919 and 18 May 1920 respectively. Hyde (1939) mentions that Audubon saw Henslow’s Sparrows near the present site of Omaha, Douglas Co and in Dixon Co 9 and 17 May 1843. There is a report without details of at least one at Valentine NWR, Cherry Co for about a week up to 19 Apr 1990.

The status of this species in Nebraska was summarized by Silcock and Jorgensen (2007); breeding distribution was depicted as extending west to Hall Co and north to Stanton Co. Sullivan (2005) surveyed the Burchard Lake WMA, Pawnee Co area and adjacent grassland in 2004, finding 27 singing birds and a nest with eggs; Sullivan also surveyed Pawnee Prairie WMA, Pawnee Co and adjacent grassland in 2004, finding 10 singing birds and a nest. Surveys of potential habitat in southeast Nebraska were carried out in 2006 and 2007 (Silcock 2007); birds were found at only five sites of 49 judged suitable for Henslow’s Sparrow. The exacting habitat requirements of this species (Silcock and Jorgensen 2007) result in aggregations of birds in quality habitat; a total of 45 singing males were found at five sites in southeast Nebraska in 2006, and about 80 in 2007, including 31 in one 160-acre prairie near Burchard, Pawnee Co 19 Aug; an adult was carrying food at the latter site. These surveys found evidence that individuals are more widespread in May-Jun than in Aug; the concentrations in favored prairie areas like the Burchard area in Aug suggest that unsuccessful breeders from elsewhere congregate in those areas later in the summer, which allows a later opportunity to breed (Silcock 2007). This phenomenon has been noted also by Zimmerman (1993) and Reinking et al (2000) and might be aided by vocal conspecific attraction, as described in Baird’s Sparrow (Ahlering and Faaborg 2006; Ahlering 2005; Herkert et al 2020).

Henslow’s Sparrow does, however, use Conservation Reserve Program (CRP) grassland and restored prairie (Negus 2005; Jerry Toll pers. comm.), although these areas require maintenance that mimics natural progression of native prairie as affected by fire and grazing. Henslow’s Sparrow usually nests in prairie that has been ungrazed, unburned, or unmowed for 2-4 years; on managed prairies a rotational grazing system can produce suitable habitat.

Sites where this species is consistently found include Burchard Lake WMA and adjacent private restored prairie in Pawnee Co, Pawnee Prairie WMA in Pawnee Co, Spring Creek Prairie in Lancaster Co, Boyer Chute NWR in Washington Co, and Whooping Crane Trust and Nature Conservancy properties in Hall Co. There are a number of additional sites where this species has been found, most on smaller prairies owned by conservation groups, such as Allwine and Nine Mile Prairies in Lancaster Co (Baumgarten 1953), but sometimes in isolated privately-owned CRP fields that are planted to native grasses and forbs or fragments of original native grassland. At most of these smaller sites, occurrence is sporadic from year to year depending on habitat condition.

There have been reports from Burchard Lake WMA since 1963; since then, depending on the status of native prairie there, as affected mostly by grazing, burning, or haying, as many as 10-13 singing birds have been found. Since 1994 (Silcock 1994) good numbers have been found at Spring Creek Prairie near Denton, Lancaster Co; best count there is the 12 found on a survey 23 Jun 2016.

A new location in 2020 was Tim Knott Tallgrass Prairie Preserve, Saunders Co, where up to four were found 16 Jun-3 Jul; a single was found a little further north on Road 8 near LeShara, Saunders Co 17 Jun. In 2021, up to three were reported along Bennet Road northwest of Martell, Lancaster Co and near Spring Creek Prairie 2 Jun-17 Jul.

Northernmost breeding noted is in Stanton Co, where four nests were found in CRP grassland in 2005 (Negus 2005); the nests had eggs 22 and 28 Jun and 3 Aug, and at least one of the nests fledged young (Mollhoff 2006). Two in CRP grassland in Thurston Co 5 Aug 2015 were a little north of Stanton Co. Two were singing in Merrick Co 9 Jun 2008. A single singing bird recorded at 517 Avenue and 892 Road in Knox Co 29 Jul-9 Aug (eBird.org) is the furthest north for the species in Nebraska.

There are about 35 reports, most without documentation. The only accepted record on eBird is 12 Oct 2014 Saunders Co. Above dates are consensus last dates, but are undocumented.

Migration occurs in Sep through mid-Oct. 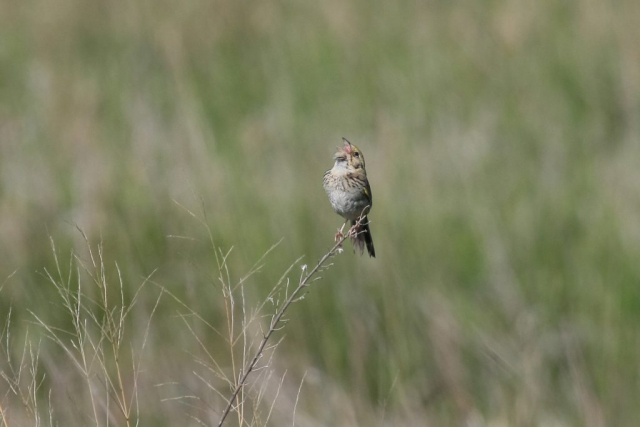