Taxonomy: There are 15 subspecies recognized (Pyle 1997, Eddleman 2020), usually divided into three groups, two of which occur south of the USA. The northern “Hepatica” group consists of five subspecies, two of which occur in the US: hepatica, breeding from northwest and central Arizona and southwest New Mexico south through highlands of Mexico, wintering from southeast Arizona and Sonora south, and dextra, breeding from the mountains east of the Continental Divide in north-central New Mexico through west Texas, and south to central Veracruz, eastern Oaxaca, and Chiapas, wintering south to Guatemala.

The subspecies of the Nebraska bird is unknown. Since it was a winter record, it apparently groups with the far-flung Oct-Nov records from Illinois, Michigan, and Saskatchewan, and is not necessarily derived from the closest breeding population in Colorado (subspecies dextra). Such records are likely post-breeding dispersers. May records away from the breeding range in North America are spring overshoots, even including one from Montreal, Canada.

The single record is of a male at the feeders of Dr. and Mrs. David Mlnarik in West Point 18 Dec 1998-6 Jan 1999 that was photographed by Loren and Babs Padelford and videotaped including calls by Ross Silcock on 6 Jan (Jorgensen 2001, 2003). The bird apparently was taken by an accipiter, as a pile of red feathers was found 7 Jan (Dr. Mlnarik, personal communication).

A “red bird” in a large spruce in a yard in Scottsbluff, Scotts Bluff Co 13 Jun 1983 was thought to be of this species due to apparent dark mandibles, although the light conditions were judged to be inadequate to identify the bird (Cortelyou 1983). No other details were published, and its identity remains unknown. 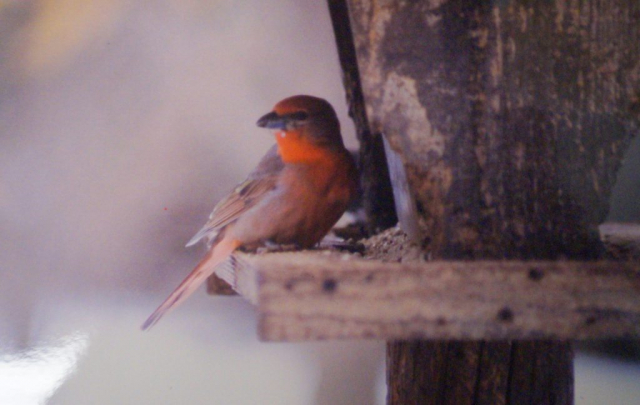