There are several Hermit Thrush subspecies that might occur in Nebraska.

Among the medium-sized, rufescent Northern Group, migrants in at least eastern Nebraska are presumably faxoni (formerly pallasii), which breeds across most of the northern United States and Canada west to British Columbia. This subspecies is rare in eastern Colorado and presumably in at least the Nebraska Panhandle; only about 3% of migrant Hermit Thrushes in eastern Colorado are faxoni (6/178; Steven Mlodinow, pers. comm.). The female specimen cited above (ZM6670) was identified by Oberholser as auduboni (Bruner et al 1904), but its measurements (wing 95, tail 70) do not eliminate the far more likely (on geographic grounds) faxoni. Further, the date of collection, 9 Apr, is about two weeks before auduboni appears in eastern Colorado in spring (Steven Mlodinow data; pers. comm.). Phillips (1991) did not examine this specimen. As yet, there is no tangible evidence that euborius or munroi have occurred in Nebraska, although they must certainly occur at least as fall migrants and occasional winter visitors; measurements broadly overlap those of faxoni. Euborius breeds from central Alaska south and east to intermountain British Columbia, and munroi breeds south of euborius in the Rocky Mountains of southwest Alberta and northwest Montana. Both subspecies migrate on the Great Plains west to Colorado and east to Wisconsin and Illinois (Phillips 1991), and winter on the southern Great Plains east to North Carolina and northern Florida. Phillips (1991) cited a 29 Jan specimen of euborius from Riley Co, Kansas. Subspecies crymophilus, lumped with faxoni for eBird reporting, occurs in Newfoundland.

Among the larger, pale gray Western Mountains Group, it has been assumed (Sharpe et al 2001) that grayish Hermit Thrushes in western Nebraska are likely eastward stragglers of the Rocky Mountains subspecies auduboni, but accumulating evidence suggests that Hermit Thrushes found at any distance from the Colorado and Wyoming foothills are as likely to be migrants from the Pacific Northwest (Jon King, personal communication), most of which are measurably smaller than auduboni. As yet, there are no records supported by mensural evidence for occurrence of auduboni in Nebraska, although Phillips (1991) cited a specimen from Finney Co, Kansas, and there are numerous reports with photographs from northeast Colorado (eBird.org, accessed October 2017). Steven Mlodinow records (pers. comm.) show auduboni in eastern Colorado away from the foothills to comprise about 60% of migrant Hermit Thrushes mostly in the periods 21 Apr-17 May and 15 Sep-15 Oct, with only 1-2 in Nov. Nebraska records are of one well-described in Kimball Co 29 Sep 2019 (Mlodinow, eBird.org), a surprising six, one photographed, in Carter Canyon, Scotts Bluff Co 6 Oct 2020 (eBird.org), and one photographed, surprisingly, in northeastern Nebraska 8 May 2018 (Mark Brogie, pers. comm.), as well as a few spring and fall sight records from western Nebraska (below). Phillips did not examine three specimens assigned to auduboni collected in Nebraska (UNSM ZM6670) and Iowa; two “probable auduboni” at the University of Iowa were misidentified.

Also, among the Western Mountains Group, the northern California montane race sequoiensis has reportedly been collected in Lane Co, Kansas, as well as in North Dakota and Oklahoma (AOU 1957); these reports, however, were discredited by Phillips (1991). Sequoiensis breeds in northeast California and winters in southeast Arizona; there are no reports of migrants on the Great Plains, and it seems unlikely to occur in Nebraska.

Among the smaller, browner Western Lowlands Group, occurrence of oromelus and guttatus is likely. Oromelus breeds from southern British Columbia to northeast California and northwest Montana and winters in southern New Mexico and southern Texas (Dellinger et al 2012, Phillips 1991). Phillips (1991) included southwest Kansas in its migration corridor. Guttatus breeds from coastal southern Alaska and, inland or away from islands, south to British Columbia, and winters along the Pacific Coast from Oregon south to Baja California Sur and east through Arizona to eastern Texas (Dellinger et al 2020). Phillips identified eight of ten specimens from western Kansas as guttatus (Jon King, personal communication), and stated (1991) that guttatus occurred as a migrant in southwest Kansas, citing a 7 May specimen at University of Kansas. There are 13 specimens of oromelus for Colorado, 10 of which are from the eastern lowlands (Leukering and Mlodinow 2017) as well as a small number of records of the “guttatus group” from extreme northeast Colorado (eBird.org, accessed October 2017). Leukering and Mlodinow (2017) state that “these forms may account for the lion’s share of early-season [Mar-early Apr] Hermit Thrush occurrences in [Colorado]”, especially since conditions in higher elevations are not condusive to arrival before late Apr-early May of auduboni, the breeding subspecies there. Steven Mlodinow data (pers. comm.) show about 34% of migrant Hermit Thrushes in eastern Colorado are of the “guttatus (Dwarf) Group”; these birds are earlier spring and later fall migrants than auduboni, and there are five winter records. A single guttatus was found in Keith Co 2 Oct 2020 and two in Scotts Bluff Co 6 Oct 2020 (Mlodinow, eBird.org), and one was banded at Chadron SP, Dawes Co 9 Oct 2020.

The measurements of two female specimens at UNSM (ZM6666 and ZM 6667) that were collected in Sowbelly Canyon, Sioux Co 8 Oct 1920 are of interest; ZM6666 is assignable to either oromelus or guttatus, but ZM6667 is small and within the mensural limits of guttatus but not oromelus. Michael Novak, Bird Conservancy of the Rockies, provided photographs and measurements of a hatch year Hermit Thrush banded at Chadron SP, Dawes Co 26 Sep 2013; the measurements clearly eliminate auduboni and are probably safely assignable to either male or female oromelus or male guttatus. Silcock (2013), in discussing this record, did not consider guttatus, based on the grayish rather than brownish flanks of the bird; this feature might also mitigate against the possibility of a guttatus/faxoni intergrade. Movements of oromelus and guttatus would parallel those of the group of western Nebraska migrants that includes Cassin’s Vireo and Townsend’s Warbler, all of which breed in the same Pacific Northwest region.

Complicating matters are foxing (browning of specimens as they age) of Catharus specimens (Phillips 1991) and a probable zone of intergradation between guttatus and faxoni in the northern Rocky Mountains. Kansas specimens from Manhattan and Kansas City are intermediate, and intergrades are thought to migrate east to the central plains then south (Jon King, personal communication).

Hermit Thrush is an early migrant in the east, arriving in early Apr and departing in early May. Last dates in the northeast are earlier than the last dates in the southeast wintering range, possibly an effect of larger numbers of observers in the southeast detecting lingering birds. Hermit Thrush migrates much later in the west, mostly in May, but is rare; Rosche (1982) observed only one in eight years of field work in the northwest Panhandle. Panhandle reports appear to be of western subspecies auduboni and guttatus; dates for birds reported as auduboni are 21-22 May 2013 (2) Lake McConaughy, Keith Co, and 23 May 2016 Scotts Bluff Co.

There is a report of a singing bird in a thickly wooded tributary canyon of the Niobrara River Valley in southeast Keya Paha Co 1 Jul 2016; the observer was unable to record the song. There is a single record of nesting in the Black Hills of South Dakota in 1966 (Tallman et al 2002).

An earlier date for the east-central and northeast is 10 Sep 2002 NNF Bessey, Thomas Co.

An earlier date for the southeast is 11 Sep 2020 Douglas Co.

Migrants arrive mid-Sep in the Panhandle and late Sep in the east; one identified as faxoni was at Lake Ogallala, Keith Co 26 Oct 2000. An auduboni was at Oliver Reservoir, Kimball Co 14 Sep 2021 and another was at Wind Springs Ranch, Sioux Co 22 Oct 2021. At Barr Lake, Colorado, where auduboni might be expected to predominate, Andrews et al (2002) cite 209 fall banding records of Hermit Thrush; 41 adults occurred 19 Sep-18 Oct and 168 immatures 7 Sep-5 Nov. Departure in Nebraska generally is completed by late Oct, although there are later reports (see Winter). 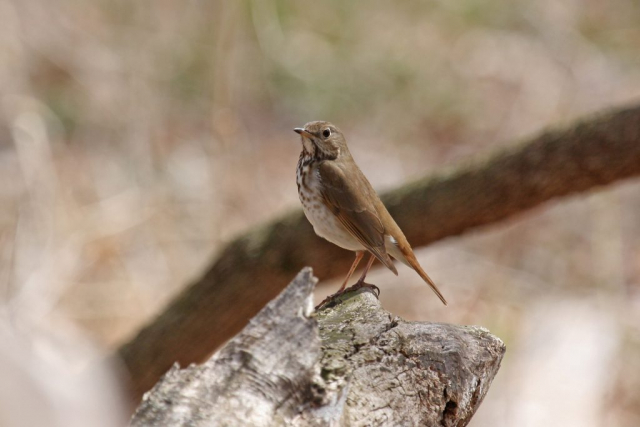 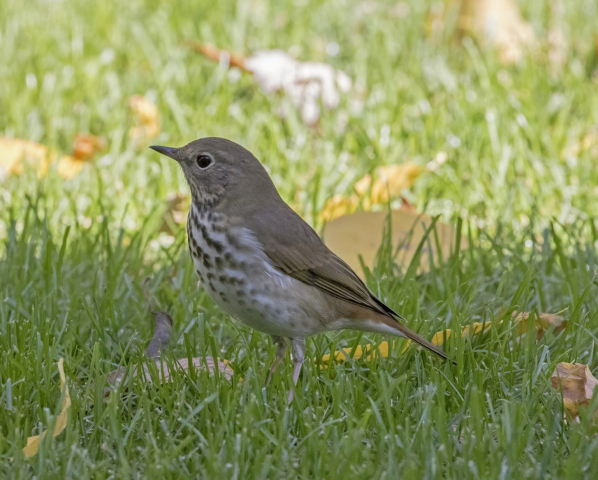