Record: In 2011 an obliging Hooded Crane chose to forage in fields next to Interstate Highway 80 in Hall Co with Sandhill Cranes for 17 days, allowing many observers to see this unexpected visitor. It was found 25 Mar by Chuck Cooper on West Platte River Drive, photographed 7 Apr by Walter Wehtje and Paul Dunbar, and remained until 11 Apr. A photograph by Thomas D. Mangelsen was published in the Grand Island Independent (newspaper) and can be viewed here.

Its provenance was a key issue, but based on exhaustive research by Mark Brogie, NOURC Chairman, in which no evidence could be found for captive origin, the species was added to the Official List of the Birds of Nebraska (Brogie 2012, 2013; Silcock 2011).

Comments: The ABA Checklist Committee (Pranty et al 2014) did not accept this species to the ABA Checklist, stating: “What may have been the same, wandering adult was photographed over a 22-month period in Idaho (April 2010), Nebraska (April 2011), Tennessee (December 2011– January 2012), and Indiana (February 2012). Records committees in Indiana (6–1 vote), Nebraska (8–0), and Tennessee (5–1) accepted the records as representing a natural vagrant or vagrants; the Idaho committee has not voted.” And further: “The case against natural vagrancy consists of a number of points, including the following: (1) the disappearance from Idaho of the captive cranes three years before the free-flying crane was first observed, in Idaho; (2) the prolonged presence of the crane in the ABA Area (presuming that only one individual accounted for all four records); (3) its curious movements eastward across the continent, including switching between populations of Sandhill Cranes; and (4) records of other unbanded, free-flying cranes found among Sandhill Cranes in the ABA Area recently.” And “The Checklist Committee (CLC) vote on the Hooded Crane went through three rounds of voting— the maximum number permitted by CLC bylaws—with the third-round vote being final. The vote tallies were 4–4, 2–6, and 3–5 in favor of natural vagrancy, meaning the Hooded Crane will not be added to the ABA Checklist based on the 2010–2012 records. At least seven CLC members would have had to agree that the records represented natural vagrants for the species to have been accepted.”

A subsequent appeal by NOURC and others (Kendall et al 2015) to the ABA CLC was unsuccessful, as no new evidence was deemed to have been presented to the ABA CLC. New evidence was provided in fall 2020 when a hunter in shot a Hooded Crane in the Delta Junction area of Alaska around 7 Oct, spurring the ABA Checklist Committee to finally accept the species as a wild vagrant to North America (Pyle et al 2020; Three species added to the ABA Checklist – American Birding Association). The Delta Junction area  is a staging location for Sandhill Cranes (Gerber et al 2020); a Common Crane occurred there 19 Sep 1998 (eBird.org).

The approximately 11,500 Hooded Cranes in existence breed in northeast Siberia and northern China, and winter in eastern China, Korea, and Japan. A recent paper (Degtyarev 2020) suggests that Hooded Cranes in Siberia likely breed well north of the Arctic Circle in the Olenyek River Basin, about 150 miles from the Arctic Ocean. This location is about 300 miles west of the westernmost known Sandhill Crane breeding location on the Yana River (Gerber et al 2020). 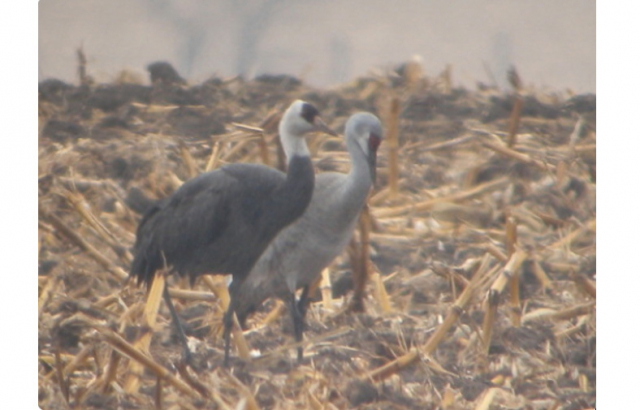