Taxonomy: Pyle (1997) recognized 40 subspecies, 19 in Eurasia, Mexico, and South America. The remaining 21 were divided into three groups, Western Rufous, Western Pale, and Eastern Dark. The Western Rufous group of six subspecies is confined to areas west of the Rocky Mountains. According to the ranges outlined by Pyle (1997), two of the Western Pale group should occur in Nebraska: leucolaema breeds from southern Alberta to central Utah east to southwest Saskatchewan and south to northwest Texas, and enthymia breeds on the Great Plains from Saskatchewan and central Idaho to Ontario and south to northwest Texas. Similarly, two of the five subspecies in the Eastern Dark group should occur in Nebraska: praticola is resident from Minnesota to eastern Kansas east to Nova Scotia and North Carolina, and alpestris winters from Manitoba south to Kansas and east to Newfoundland and Georgia.

According to Bruner et al (1904), leucolaema breeds in the west, eastward to about the 99th meridian (near Kearney, Buffalo Co), and praticola in the east, westward to about the 97th meridian (near Lincoln, Lancaster Co). Presumably intermediates occur between the two subspecies in central Nebraska. However, the easternmost populations of leucolaema are now considered separate as enthymia (Pyle 1997), breeding from eastern Wyoming and eastern Colorado eastward, including breeding Horned Larks in western Nebraska. Ludlow (1935) considered nesting birds in Webster Co to be of the race enthymia, and a specimen of enthymia collected in Clay Co in May is cited above.

As suggested by specimen dates cited above, at least some breeders (enthymia, praticola) may remain in winter, likely joined at that time by more northerly breeders of the same subspecies, along with winter visitors of western leucolaema, northern alpestris and northeastern hoyti. Data from central Ohio (Bent 1942) show that the race hoyti occurs there 26 Nov-17 Mar, and peak numbers of the race alpestris occur in the period Dec-Feb.

Pyle (1997) stated that sub-specific differences are most marked Feb-Jun, but during Aug-Jan differentiation of fall birds and juveniles can be “difficult, if not impossible.”

Resident: Beason (1995) stated that Horned Larks are resident throughout most of the breeding range; northernmost populations are migratory, although Beason refers to fall departure by breeders much further north than Nebraska, in Canada and Alaska. We believe Nebraska breeders are generally resident, although some movement southward is not unlikely in severe winter conditions.

Summer: The BBS Summer Distribution Map for 2007-2013 shows greatest densities in the southwest and southern Panhandle with declining densities eastward across the state. Johnsgard (1980) suggested that the “sparse grasslands of the Sandhills are probably a nearly optimum habitat”; perhaps the very high densities in southwestern shortgrass prairies is a recent phenomenon. Lowest densities are in the southeast, where croplands are the norm and grasslands are minimal. However, most Horned Larks have fledged young prior to the start of cultivation practices around early Apr. BBS trend analysis shows -0.39 (95% C.I.; -2.00, 0.94) annual change statewide, indicating relatively stable abundance in Nebraska 1966-2013. A BBS route in Scotts Bluff Co 11 Jun 2017 counted 303 Horned Larks. 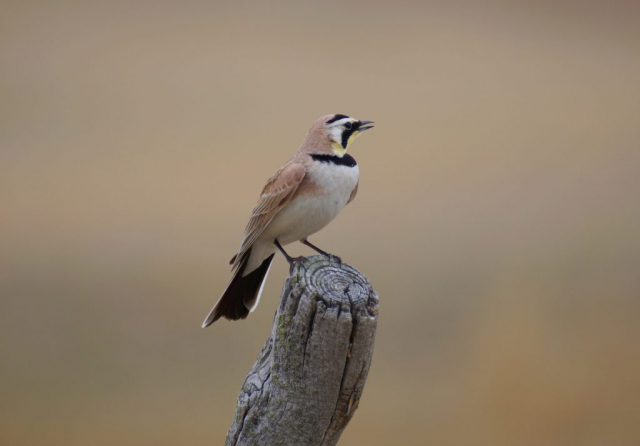