Taxonomy: This species, along with Purple Finch and Cassin’s Finch, were recently assigned to their own genus (Haemorhous, from Carpodacus) based on a study by Zuccon et al (2012), Chesser et al (2012).

Of about 11 subspecies that have been named, only two occur north of Mexico (Badyaev et al 2012): frontalis (including clementis and solitudinus) resident in the western United States from the Pacific Coast, including on the Channel Islands, east to the western Great Plains and south to northwest Mexico, including islands off northwest Baja California, and potosinus, resident in the northern Mexican Plateau from central Chihuahua and southwest Texas south to Zacatecas, southwest Tamaulipas, and San Luis Potosí.

Prior to the appearance in Omaha, Douglas Co in 1987 of westward-spreading House Finches derived from a release in Long Island, New York in 1939 (Elliot and Arbib 1953, Cant 1962, Mundinger 1975; see below), House Finch was restricted to western and central Nebraska; as expected, these were subspecies frontalis (AOU 1957, Rapp et al 1958). Beginning in 1987, House Finches arrived in Nebraska from the east; the birds released in New York in 1939 were trapped in Santa Barbara, California (Elliot and Arbib 1953, Cant 1962, Mundinger 1975), and thus also of subspecies frontalis.

House Finches with yellow in place of red are occasionally reported in Nebraska. There is apparently little correlation between proportion of red (in particular astaxanthin and adonirubin) and yellow (zeaxanthin) carotenoid pigments between populations and ages (Inouye et al 2001, Badyaev et al 2012). An intriguing comment was made regarding a possible connection between a “huge” apple crop and a “huge” number of orange variant House Finches in Scotts Bluff Co 4 Dec 2014 (Ann Duey, personal communication).

Resident: As of 1900, House Finch was unrecorded in Nebraska (Bruner et al 1904) although it must have appeared soon after. “A dozen Crimson-fronted Finches” were seen in Bull Canyon, Banner Co, 2-6 Aug 1911 by Frank Shoemaker and Robert Wolcott; apparently no specimen was collected (Wayne Mollhoff, personal communication).

Subsequently, one was collected in Haigler, Dundy Co 29 Jan 1916 (specimen cited above), and another in Bushnell, Kimball Co 2 Jun 1919 (Mickel and Dawson 1920, specimen UNSM ZM7121; Bray et al 1986). These birds presumably originated from House Finch populations in the western US. AOU (1957) stated that it occurred in Kimball Co and Haigler in western Nebraska, and Rapp et al (1958) described it as “a common permanent resident in the Panhandle Region, especially in the vicinity of Scottsbluff. Has nested in Lincoln Co”.

The spread of House Finch is apparently accomplished by dispersal in fall of birds which visit feeders in towns and cities and then breed the next summer, or within very few years thereafter (Rosche 1994). First records at most locations are indeed in fall or winter, and in some cases predate the establishment of breeding populations by several years.

Eastward spread of the species has been primarily in the North Platte River Valley and has been attributed to the presence of “dense planted evergreens in residential areas … and feeding stations” (Rosche 1994). It apparently became established in Scottsbluff, Scotts Bluff Co well before 1958 (Olson 1956, Swenk 1926, Ducey 1988, Rapp et al 1958); Mollhoff (2022) cited a pair of adults with young found by Mrs. J. W. Hall in Scotts Bluff Co 18 Jul 1926. An isolated population was established in North Platte, Lincoln Co in the 1950s (Gates 1955). Between these locations, establishment was slower, at Oshkosh, Garden Co and Ogallala, Keith Co in 1977 (Rosche 1994, Brown et al 1996) and the Kingsley Dam area, Keith Co in 1985 (Rosche 1994), although there was an earlier report for Keith Co 20 Mar 1964. A population had been established in Kearney, Buffalo Co for many years prior to 1980, although no specific information regarding its origin has been published. Breeding began in Hall Co in 1983 (Coons 1983, Bennett 1984), and at about the same time in Adams Co, where the first summer reports were in 1984. Reports from neighboring Kearney and Phelps Cos are recent, despite the presence of the long-established colony in Kearney, although individuals were reported at a Minden, Kearney Co feeder in late summer 1983-85 (Turner 1983, 1985, 1986).

Prior to 1980, colonies were established in McCook, Red Willow Co as well as in Kimball and Haigler. Summering birds were reported in Chase and Perkins Cos by 1982, and by 1990 the southern Panhandle and southwest were occupied, east to Kearney Co, including Republican River Valley counties (Mollhoff 2001).

Establishment in Pine Ridge towns occurred in the late 1970s-early 1980s; nesting was first detected in Dawes County in 1973 and birds have been seen every year since at feeders; the first summer record was in Chadron, Dawes Co in 1982 (Williams 1982) and it had become common there two years later (Williams 1984). Colonization of the Sandhills began later than in the Pine Ridge, as might be expected; nesting birds were noted at Hyannis, Grant Co in 1993 (Rosche 1994) and in Gordon, Sheridan Co in 2003.

The timing and point of contact of eastern and western birds is unclear; perhaps the best evidence is provided by the comparison of the two Breeding Bird Atlases for 1989-1994 and 2006-2011 (Mollhoff 2001, 2016). The distribution by 1994 was essentially restricted to the area south of the North Platte and Platte River Valleys east only to Webster, Adams, and Hall Cos, and with a few reports in the southwest Loup drainage. The east and north were essentially unoccupied. By 2014, however, the entire southeastern two-thirds of the state was occupied, as well as most of the Panhandle, with only the western Sandhills lacking reports. This difference provides support for the idea that eastern and western birds made contact in the general area of Columbus, Platte Co, probably in the mid- or late 1990s.

A nest in Ashland 27 Apr 2002 had two eggs as well as a House Sparrow egg and two Brown-headed Cowbird eggs (Molhoff 2004). At Fontenelle Forest, Sarpy Co, a female was incubating in a Barn Swallow nest 1 May 2015; the arriving Barn Swallows were “not happy” (Rick Schmid, personal communication). One with a brood patch was banded at Wildcat Hills NC, Scotts Bluff Co 1 Sep 2009.

House Finches form small flocks in Aug-Sep and often disappear from their summer locales; these flocks may winter some distance away; this is the method by which the species has expanded its range. An indication of flocking and migration was the banding of over 800 House Finches in Bellevue, Sarpy Co during Aug 2000; the birds had moved on by mid-Sep and none were recaptured subsequently (Ruth Green, personal communication). Birds banded in the Lake Ogallala area have been recovered in Kansas and South Dakota (Brown and Brown 2001).

CBC data show highest counts in cities where the species has been long established. Highest single count is 348 at Scottsbluff 17 Dec 2005; 263 were at Lincoln 18 Dec 2010. A good CBC tally for the 1980s was the 134 in North Platte, Lincoln Co in 1983-84. Numbers banded in the Bellevue area are lowest Dec-Feb (Ruth Green, personal communication). 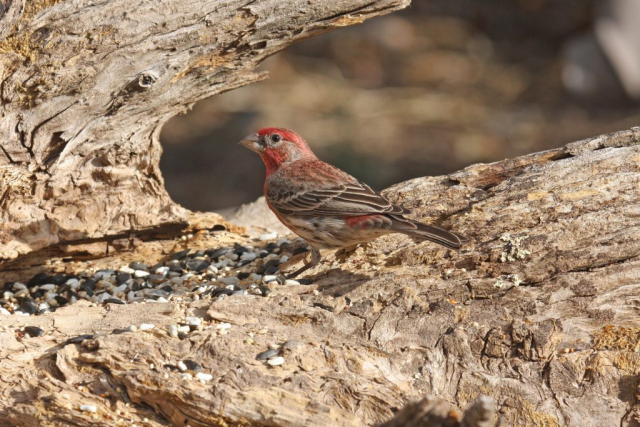