Taxonomy: Twelve subspecies are recognized throughout Eurasia (Gill and Donsker 2017). The introduced North American population is derived from individuals of subspecies domesticus from England and Germany; first releases were in New York in 1851 and 1852 (Lowther and Cink 2020, AOU 1957). Many transplants to other locations from established US populations were made (Lowther and Cink 2020), including one in Nebraska City, Otoe Co, Nebraska in 1875 (see below).

At least one fertile hybrid with Eurasian Tree Sparrow P. montana has been reported (Lowther and Cink 2020), and, more recently, one was photographed in Polk Co, central Iowa 3 Jul 2018 (Dougherty, https://ebird.org/view/checklist/S46975506).

Resident: Ducey (1988) cited unpublished research by Swenk which showed that the first House Sparrows were released at Nebraska City in the 1870s. At the urging of a Mr Stolley, who had released 10 birds at his farm near Grand Island in 1875 (Jim McKee, Lincoln Journal Star Mar 2019), the State of Nebraska “ordered 100 sparrows from New York City at 75 cents a pair and a Union Pacific employee brought three pairs to Omaha. A few were released in Nebraska City about the same time and within a year “the insect-eating sparrows were said to be seen swarming around tall buildings in Omaha” (Jim McKee, Lincoln Journal Star Mar 2019). Mollhoff (2022) cites the first nest record as a set of eggs University of Kansas Biodiversity Institute #95750) collected in Lancaster Co by L. Robbins 4 May 1892. The sparrows subsequently spread rapidly, primarily along railroads, until the Wyoming border was reached in northwest Nebraska in 1899 (Rosche 1982). Bruner et al (1904) considered it abundant statewide. Lowther and Cink (2020) stated that “Although relatively sedentary, post-breeding flocks of adults and young do move about to areas of abundant forage provided by ripened cereal crops”; this was presumably how this sedentary species was able to spread westward in North America. Unsurprisingly, the current distribution in Nebraska (eBird.org, accessed 26 Oct 2016) closely resembles that of European Starling.

BBS data show a continent-wide population decline for period 1966-2013 and in Nebraska, the species has declined annually by -4.80% (95% C.I.; -5.59, -3.94) statewide during this period (Sauer et al 2017). It may be currently less abundant in towns and cities than formerly (see high CBC counts, below), possibly due to a reduced number of horses and recent (since the 1990s) increases of House Finches (Silcock 1996a). Nowadays House Sparrows appear to be more numerous in rural areas, especially around farmsteads. In the winter of 1995-96 observers in Dakota and Dawes Cos in Nebraska noted a similar phenomenon (Silcock 1996b).

Winter flocks are particularly conspicuous around livestock feeding operations and grain elevators. CBC data indicate a rather even distribution statewide, with no evidence of any significant seasonal shift of populations when data is compared to BBS data; highest CBC counts are from eastern population centers, such as 5500 birds at Omaha, Douglas Co in 1967, 4901 at Norfolk, Madison Co in 1985 and 4638 at Lincoln, Lancaster Co in 1974. 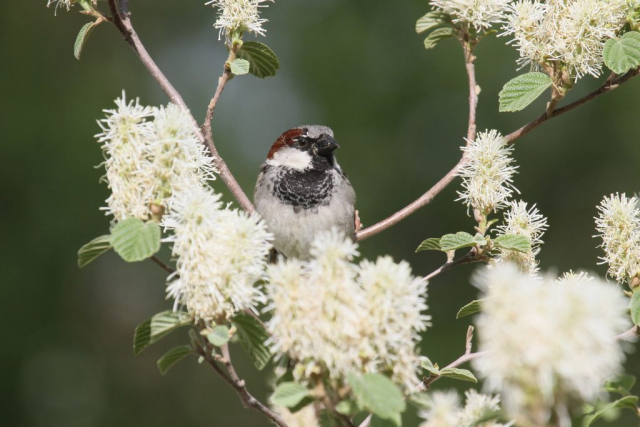