Taxonomy: After the taxonomic revision of Rallus rails (Chesser et al 2014), King Rail as reconstituted contains two subspecies, elegans of eastern Canada and the northeastern United States, and ramsdeni of Cuba and the Isle of Pines.

Over half of the approximately 50 King Rail records for the state are in the period 26 Apr-15 Jun. Arrival is in late Apr, although there are earlier reports 10 Mar 1990 Sheridan Co (Grzybowski 1990), and 2 Apr 1967 Adams Co, possibly wintering birds. Northern, and particularly inland, breeding populations are generally migratory (Pickens and Meanley 2020). There is a specimen, UNSM ZM6095, 8 May 1920 Lincoln, Lancaster Co.

Summer: There are no recent breeding records; this species may be extirpated as a breeder in Nebraska (Jorgensen et al 2022) and generally in the Midwest as extent of wetlands has declined (Bolenbaugh et al 2012). There are no confirmed breeding records in Nebraska since 1940 (see below). Ducey (1988) cited early records from Douglas and Lancaster Cos around 1900, and Swenk (Notes Before 1925) noted that it possibly nested at Inland, Clay Co in 1915 and 1916, although it was unclear whether the nest was of King Rail or Virginia Rail. A juvenile collected at Inland 1 Oct 1916 (HMM 7458; Swenk, Notes Before 1925) may have hatched there, but could also have arrived from elsewhere. A sighting of four near Carter Lake, Omaha 28 Jun 1930 is suggestive of breeding (Swenk 1930). An adult with 5-6 young was seen near Fairbury, Jefferson Co 29 Jul 1940 (Callaway and Callaway 1940). Sightings at a marsh in Lancaster Co 20 May-11 Sep 1971 were suggestive of breeding (Cink 1971). The presence of up to five at Capitol Beach Lake, Lancaster Co 24 Jul-18 Aug 1984 (Grenon 1990, Williams 1985a, 1985b) indicated successful breeding.

Fall: Reports are few, but suggest that departure is in Sep. All reports are:

The latter three reports, along with two early spring records (see Spring), raise the possibility of overwintering, suggested by Rosche (1994) for Clear Creek WMA. King Rails, like Virginia Rails, occasionally remain in northern parts of the breeding range if spring seeps or open water are available and the temperature rarely drops below -1C in Jan (Root 1988). 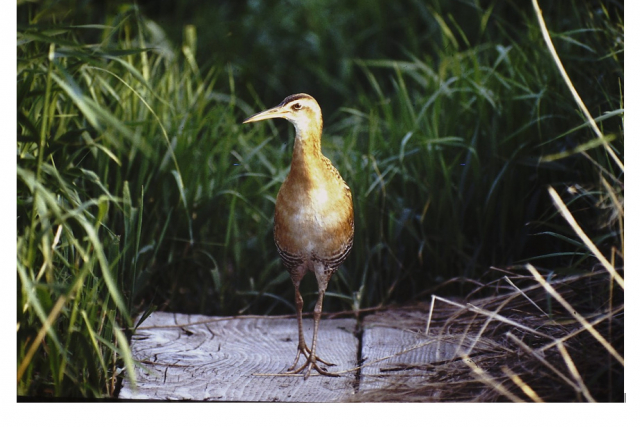