Taxonomy: Five subspecies are currently recognized (Hussell and Montgomerie 2020), two of which occur only in Eurasia and a third only as a vagrant to western islands of Alaska. The remaining North American subspecies are alascensis, breeding from Alaska to northwest Northwest Territories and wintering south to California and east to Texas, and subcalcaratus, breeding from north-central Northwest Territories and Manitoba east to northern Quebec and northwest Labrador, wintering south to Texas and east to North Carolina.

The wintering ranges of both alascensis and subcalcaratus include Nebraska, although alascensis might be expected mostly in western Nebraska. Of three specimens collected in Logan Co in the 1930s and identified by Swenk, two were subcalcaratus (24 Dec 1935 and 9 Jan 1937), and one was alascensis (31 Oct 1936) (Glandon and Glandon 1937). These specimens cannot now be located at UNSM; apparently the Swenk collections passed to the Museum of Vertebrate Zoology at Berkeley, California after his death (Thomas E. Labedz, personal communication). There are, however, two specimens of alascensis at UNSM; the one cited above, and the other, ZM7604, also taken at Haigler, Dundy Co 16 Nov 1901.

There are several Nebraska specimens at UNSM labeled subspecies lapponicus, but this epithet is now used for breeders in northern Russia west to Norway (Hussell and Montgomerie 2020). We believe these latter specimens are examples of subcalcaratus.

Migrants depart by mid-Apr. Peak migration is probably in Mar, according to High Counts (below).

Winter: Lapland Longspurs occur statewide in winter, often with Horned Larks, but in pure flocks also, especially when large numbers are present. Both Rosche (1982) and Thompson and Ely (1992) refer to the propensity for large numbers to congregate over towns during snowfalls. The largest flocks occur in the west; Rosche (1982) stated that peak numbers in the northwest are found in wheat stubble and sugar beet fields near Alliance and Hemingford in Box Butte Co.

This species moves around during the winter in response to variations in extent of snow cover, resulting in the large variation in numbers from year to year. CBC data reflect this; in the period 1900-2015 the high CBC count was 23,982 in 1978-1979, 23,452 of these at Lincoln 17 Dec 1978. The Lincoln birds were in mixed flocks with Horned Larks and were “gone by January” (Cortelyou 1979), suggesting that migration or at least significant movement is still in progress in mid-Dec. During the 1900-2015 period, all but three CBCs reported fewer than 15 birds per party-hour. 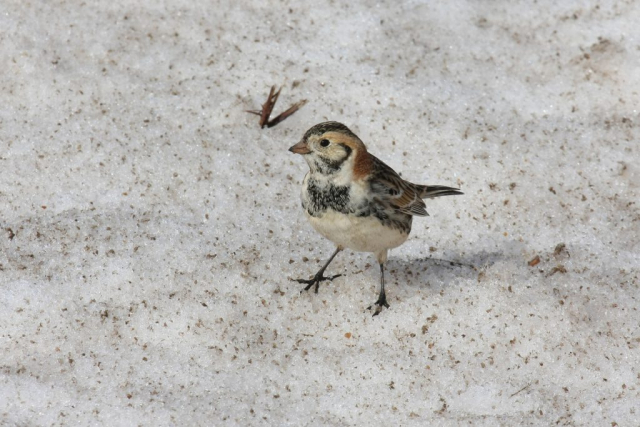 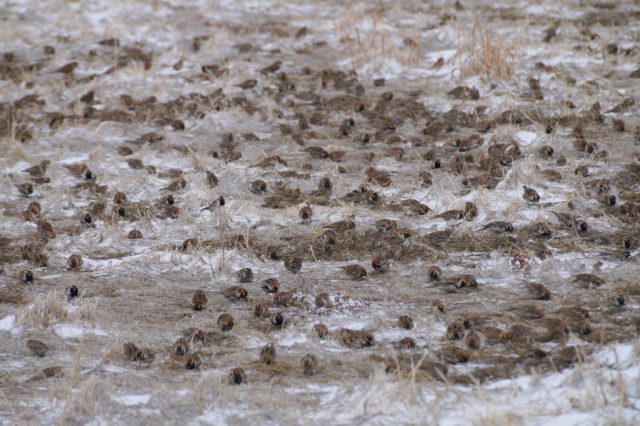