Migrants generally appear in early May and peak numbers occur in late May.

Summer: Breeding numbers are erratic, and their distribution is variable; Lark Buntings can be abundant in the Panhandle, with largest numbers occurring in dry years when birds may also be found further east. BBS data 2007-2015 reflect high densities in the west, declining into the central; the species is absent in the east. Lark Buntings have declined -1.85% (95% C.I.; -5.02, 1.20) in Nebraska during the period 1966-2015 (Sauer et al 2017). Mollhoff (2016) also showed a marked decline in the proportion of BBA blocks in which the species was reported between the first and second BBA projects, even though overall observer effort increased. Most of the decline appears to be along the eastern edge of the species range, which appears to have retreated west over time, although this conclusion is confounded by the erratic and variable distribution of the species during summer.

Even prior to the conversion of tall grass prairie to agriculture, Lark Bunting was rare in the east (Bruner et al 1904). Ducey (1988) and Mollhoff (2022) cited nesting records in Madison, Cuming, Douglas, Lancaster, Seward, Otoe, Gage, and Nemaha Cos prior to 1920 and none for 1921-1960. Post-1960, however, Ducey (1988) cited records in Adams, Clay, Greeley, Hall, and Howard Cos. An additional record was in York Co (Bennett 1971). There are no eastern breeding records since the early 1970s even though there have been extended dry periods (e.g., early 2000s). Nesting occurred in northeast Cherry Co in 1982 (Brogie and Mossman 1983), a BBS route along the Rock-Brown Cos line yielded “several” 16 Jun 1995, and the most easterly confirmed breeding record shown in Mollhoff (2016) was in Hayes Co.

Lark Buntings occasionally nest in agriculture fields. Such was the case when “many” were nesting in milo stubble in Clay County In 1965 (Cortelyou 1966), and 30-40 were using a growing cornfield no tilled into the previous year’s wheat stubble 28 Jun 2007 in Lincoln Co.

Most birds depart the state by mid-Sep. Post-breeding flocks form as early as late Jul; two flocks of 30 were seen in Scotts Bluff Co 27 Jul 2003.

There are no documented Nebraska records for Nov, even though wintering has become essentially annual, albeit cyclical, in southwest Kansas in recent years (Thompson et al 2011). 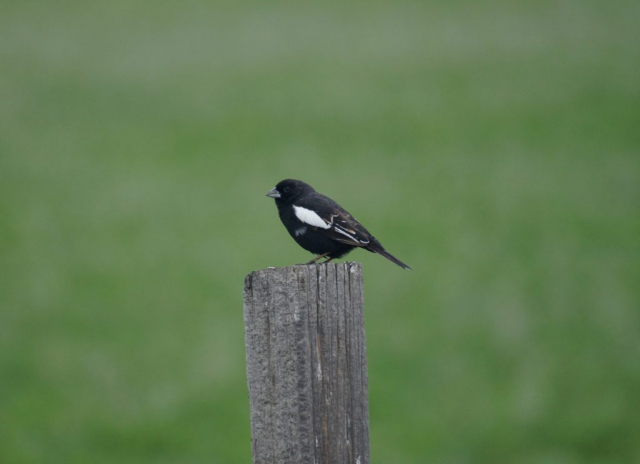