According to Bruner et al (1904), grammacus breeds in eastern Nebraska west to the 98th meridian [just east of Grand Island], while birds breeding elsewhere in the state are strigatus. Swenk (Notes Before 1925) noted that specimens taken in the Kearney, Buffalo Co area were mostly strigatus. This suggests that grammacus is the breeding race of the original tallgrass prairie area, while the rest of the state is occupied by strigatus. It is unknown whether recent increasing numbers in the east are grammacus or strigatus, or intergrades. It is likely that most birds in central Nebraska are intergrades; Nebraska breeders within the range of strigatus have been separated as quillini, but differences are slight, and this taxon is not currently recognized; these birds appear to be intergrades with grammacus (Pyle 1997).

Summer: Lark Sparrow breeds statewide and is “our most common sparrow” in the summer breeding season (Mollhoff 2016). They can be abundant in the Sandhills, particularly in pastures where low shrubs such as yucca are found. Numbers have increased in the east since 2001 (Mollhoff 2001, 2016), where it is now as common as in most of the rest of the state. Jorgensen (2012) stated that there were no breeding records in the eastern Rainwater Basin; there were no confirmed breeding records in that area 2006-2011 (Mollhoff 2016).

There are two CBC reports without documentation, likely mis-identifications. There is only one documented Dec or winter record, although two were reported in South Dakota at the Gavin’s Point Dam area 12 Feb 2011. 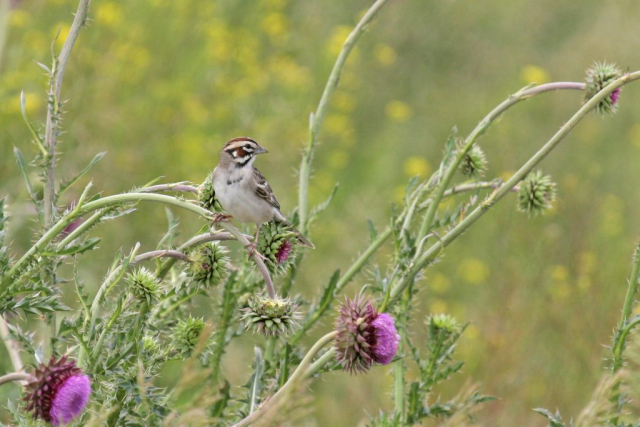