Comments: This species and Indigo Bunting hybridize where their summer ranges meet in the northern Great Plains (Sibley and Short 1959, Kroodsma 1975, Emlen et al 1975). However, because of sympatric occurrence without interbreeding in the southwest United States and non-random hybridization in the northern Great Plains, they are generally regarded as separate species (Mayr and Short 1970, AOU 1983, Sibley and Monroe 1990). Studies in northeast Wyoming (Baker and Boylan 1999) suggest that females prefer mates of the same species, and that mates of the other species are chosen possibly as a last resort; fitness of hybrids appears to be inferior to that of pure birds. Recent genetic studies show that the hybrid zone has narrowed and moved westward at about 1.5 miles per year during the last 40-45 years and is predicted to continue to narrow (Carling and Zuckerberg 2011). The hybrid zone runs north-south and is rather narrow; in width it extends approximately from central Keith Co to central Garden Co, a distance of approximately 35 miles. Westward expansion of Indigo Bunting appears to be an important factor in the shift westward of the hybrid zone (Carling and Zuckerberg 2011); assortative mating and selection against hybrids may be narrowing the zone and, in effect, reinforcing separation of the species. The hybrid zone is much narrower than in the 1960s (Short 1961). A potentially significant factor in determining hybrid fitness is that Lazuli Bunting undergoes molt migration while Indigo Bunting does not. This, hybrids may inherit varying tendencies towards undertaking molt migration, which in many cases could have detrimental results in terms of survival, such as incomplete molt migration in “western” hybrids or partial molt migration in “eastern” hybrids. Research on this topic is in progress by Paul Dougherty in Wyoming (Minor 2021).

Environmental factors are known to affect the locations of the Great Plains avian hybrid zones (Swenson 2006), and intriguingly, similar westward movements have previously been documented in two of these: the hybrid zone between the flickers (Aguillon and Rohwer 2021) and between the Baltimore (Icterus galbula) and Bullock’s (I. bullockii) orioles (Corbin and Sibley 1977; Walsh et al. 2020).

It is possible that some reports of Lazuli Bunting east of the rather restricted Nebraska breeding range may be of hybrids which resemble Lazuli Bunting more than Indigo Bunting. Short (1961) found hybrids in a 500-mile-wide zone from Blair, Washington Co, Nebraska west to Greeley, Colorado, and stated that hybrids should be expected statewide although more commonly in the west. Nine of 18 birds collected by Short (1961) in eastern Nebraska showed backcross characteristics, although this would have been difficult to discern in the field. A bird resembling an Indigo Bunting with a white abdomen, a common hybrid type (Kroodsma 1975), was as far east as Schramm SP, Sarpy Co 26 May 1997, a similar bird was at Table Rock WMA, Pawnee Co 31 May 2020, a hybrid female with wing bars was at Fontenelle Forest, Sarpy Co 13 May 2010, and an introgressant with blue-mottled white underparts was photographed in Douglas Co 13 Jul 2020. Reporters to eBird in summer 2019 were cautious about field identification of Lazuli and Indigo Buntings on the Pine Ridge; of 35 total reports, 16 were Lazuli Buntings, seven were Indigo Buntings, six were Lazuli/Indigo, and six were Lazuli X Indigo. Since the narrow hybrid zone lies at the east edge of the Pine Ridge, these reports, if true, suggest a continuing westward movement of Indigo Bunting genes.

Johnsgard (1979) suggested that most Platte River Valley birds were hybrids, Brown et al (1996) stated that of 27 birds netted in Keith Co which appeared to be Lazuli Buntings, six showed some hybrid characteristics, and Rosche (1994) indicated that all territorial males at the Clear Creek WMA, Keith Co appeared to be hybrids, based on their resemblance to Indigo Buntings but with white abdomens. The presence of similar individuals in the Pine Ridge area led Rosche (1982) to note that hybrids were far more prevalent there than were pure Indigo Buntings. Hybrids were “common” around Fort Robinson SHP 14 Jun 2006. 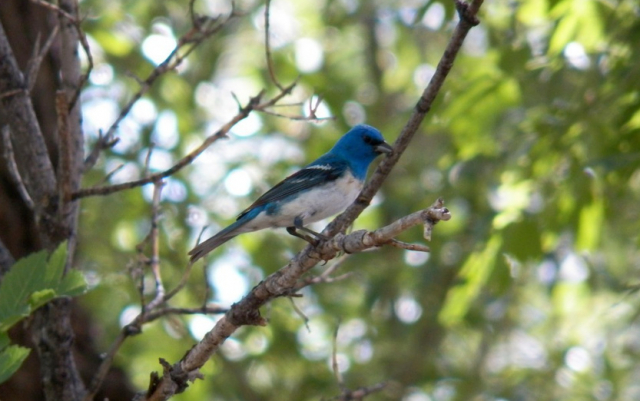