Taxonomy: There are six subspecies in all, five occurring from Mexico southward (Gill and Donsker 2017) and only one, exilis, in North America.

Peak migration is mid- to late May.

Summer: This species is associated with marshes with dense stands of emergent vegetation; many of these are dynamic with variable conditions except for certain large Sandhills marshes with relatively stable water levels. A playback study of “secretive marsh birds” in 2016-2017 (Jorgensen et al 2022) resulted in 65 detections of Least Bittern in Sandhills marshes and only five in the Rainwater Basin. This discrepancy is likely due to the more variable nature of east and southeastern wetlands in Nebraska; wetter springs and summers usually yield increased sightings of this species in those sections of the state. Nevertheless, since 1973, there have been numerous breeding season reports in the southeast, many of which probably involved breeding birds. In the period 1992 through 2015 there were 35 reports in 16 of those 24 years, with concentrations in 1997-99, 2009-2010, 2014, and 2016, presumably wet years; in 2010, 15 Least Bitterns were reported.

It is probably more widespread and numerous in Sandhills marshes than the small number of records indicate due to limited coverage by observers, although there are only two confirmed Sandhills breeding records: 1938 in Garden Co (Tout 1947) and a nest in Wheeler Co 17 Jun during 1984-89 (Mollhoff 2001). It was “common in the Garden Co lakes” prior to 1925 (Swenk, Notes Before 1925). Most reports are from Crescent Lake NWR; a juvenile was found 18 Jul 2009, one was there 30 May 2020 and two were near Goose Lake 5 Aug 2021. Tout (1947) considered it a “common summer resident and breeder in swamps” in Lincoln Co.

Departure from breeding locations is in Aug. 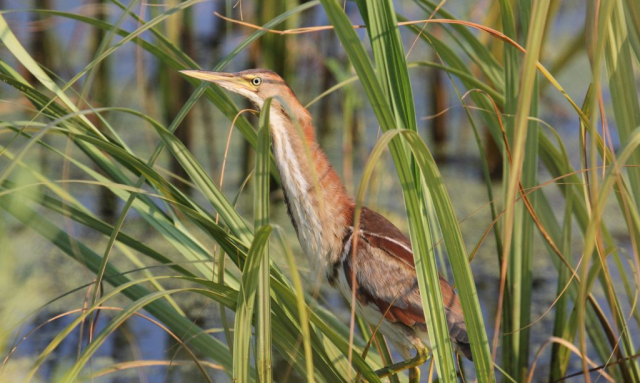