Among the Empidonax group, Least Flycatcher is the earliest migrant; arrival is in early May, peak numbers occur in mid-May and last dates are in early Jun, although some singing birds in Jun may be summering, especially in the north (see Summer).

Summer: Least Flycatcher regularly breeds throughout most of South Dakota, south to the Nebraska border (Tallman et al 2002, Drilling et al 2018). As might be expected, reports of possible breeding in Nebraska comes from areas in the north and west, but there no confirmed breeding records (Mollhoff 2022). Territorial Least Flycatchers in early to mid-Jun, especially in cottonwoods, should be monitored for breeding, although single singing birds may not necessarily be potential breeders; breeding birds tend to be in “small territories in highly dense clusters that resemble classical leks” (Tarof and Briskie 2020).

The Second BBA (Mollhoff 2016) reported “probable” breeding in Thurston, Dakota, and Knox Cos. Short (1965) reported two pairs, also in “tall cottonwoods”, along the Niobrara River in Brown and Keya Paha Cos, apparently in mid- to late Jun 1964, although nesting was not confirmed by Short or by Mossman and Brogie (1983) in the same area. Two were in pines at Cub Creek Lake, Keya Paha Co 19 Jun 2013 but could not be re-located there 27 Jun. One was along the Niobrara River in Knox Co 16 Jun 2020.

Indication of breeding in eastern Nebraska (Tarof and Briskie 2020) is unsupported by current evidence (Mollhoff 2016), although it may have bred in the Missouri River Valley prior to 1904 (Bruner et al 1904).

Migration in this species apparently begins statewide with adults that may return very early, with first dates in early Jul; some such sightings at that time may be of summering birds, especially in the north. According to Tarof and Briskie (2020), “Unlike most Passerines, adult Least Flycatchers migrate to their wintering grounds before molting, whereas young molt before and during autumn migration.” Kansas fall specimens are in the range 3 Jul-24 Sep (Thompson and Ely 1992). Migrants were banded 25 Jul-28 Sep Cink (1998), at Chadron SP, Dawes Co 31 Aug-3 Oct 2013, and at Cedar Point Biological Station, Keith Co, Nebraska, 22 Jul-17 Aug (banding operations ceased on the latter date, Brown et al 1996).

Migrants are less common in fall in the Panhandle than in spring; eBird data from Yuma County, Colorado show that around 90% of spring migrant Empidonax flycatchers are Leasts, but only 50% in fall (Steven Mlodinow, pers. comm.). 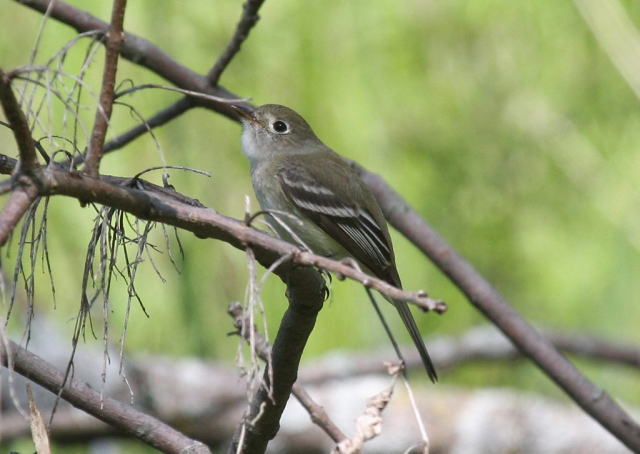