This species primarily occurs along rivers and associated habitats (e.g., sand and gravel mines) and is rare elsewhere, as exemplified by the few Rainwater Basin records; there are only six spring records (Jorgensen 2012), most recently 19 May 2001, 27 May 2011, and 9 Jun 2007.

Summer: Breeding occurs in the Missouri, Platte, lower Niobrara, lower Loup, and lower Elkhorn river systems. Historically, breeding occurred almost exclusively on river sandbars in these systems, but human alterations to the environment have changed the species’ distribution and habitat use in the state (Sharpe et al 2001). River development (e.g., withdrawals, channelization, and damming) has since altered river flows and hydrologic regimes, which, in turn, has led to a general decrease in sandbar habitat (Sharpe et al 2001). James Ducey summarized historical information as part of efforts by Nebraska Audubon in the early 1980s in support of listing of Least Tern as a “Threatened Species” by US Fish and Wildlife Service” (Ducey 2010). However, human activity has also resulted in habitat created incidentally at sand and gravel mines and lakeshore housing developments in Nebraska’s river systems, particularly the Platte River (Brown and Jorgensen 2008, Brown et al 2016). Approximately 90% of Interior Least Terns breed in drainages of the lower Mississippi River, with only about 5% of the population in the upper Missouri River and tributaries, which includes river systems in Nebraska (Lott et al 2013). An exhaustive review of data used in the Adaptive Management modeling process that is part of the US Army Corps of Engineers (USACE) Missouri River Recovery Plan was published by Buenau et al (2015).

Historically, breeding presumably occurred along the entire eastern border of Nebraska (Ducey 1985, EA Engineering 1988). Since the channelization of the Missouri River below Sioux City in the 1950s, breeding regularly occurs only along the remaining un-channelized portion of the river between Gavin’s Point Dam and Sioux City (Sharpe et al 2001). In this river stretch, nesting habitat has been artificially increased at times by mechanical methods (e.g., dredging to create artificial sandbars) when sandbar habitat was limited. Nesting also occurs on human-islands in the upper portion of Lewis and Clark Lake and along the Missouri River upstream of the “delta” in Lewis and Clark Lake to the South Dakota border.

A review of survey data for 97 Least Tern breeding sites in the Niobrara, Platte, and Missouri River (bars below Fort Randall and Gavin’s Point dams) for 2002-2011 resulted in a minimum count of 1610 birds (Lott et al 2013). Reduced or declining habitat trends are periodically reversed by major flow events; the 2011 flood event created >14,000 acres of sandbar habitat on the Missouri River (U.S. Army Corps of Engineers 2013). In addition, the 2011 event created small patches of habitat below Sioux City. A single nest was found in an expanse of un-vegetated sand adjacent to the main channel in Burt County in 2012 and a small number apparently nested at Schilling WMA, Cass Co, immediately downstream of the Missouri-Platte River confluence (Pavelka 2012). Small numbers also nested in southwest Iowa (Ubias et al 2014) and northwest Missouri (Eric Hoppes, NRCS, personal communication). Breeding occurred from 1991 to 1994 along Papillion Creek (Silcock and Rosche 1994), a smaller tributary of the Missouri River that empties just above the mouth of the Platte.

Breeding in the Platte River systems extends west to Lake McConaughy, Keith Co, where the species was first discovered breeding in 1989 (Czaplewski 1989), although the first occurrence was in 1977 (Rosche and Johnsgard 1984). Breeding is now annual at protected sites around Lake McConaughy (Brown and Brown 2001). The number of breeding pairs and nests has ranged from two to 29 from 1993 to 2014 (Central Nebraska Public Power and Irrigation District (CNNPID) 2015), although no nests were observed in 2016 (Zorn and Wilson 2016). Small numbers also nest at sand and gravel operations in Lincoln and Keith Counties (Peyton and Wilson 2016). Tout (1947) located a colony of 17 nests on 6 Jul 1926 on the South Platte River in Lincoln Co. Early modern studies of breeding Least Terns and Piping Plovers on the lower Platte River system were made by Ducey (1981, 1982), including perhaps the only information available on nest scrape characteristics of both species (Ducey 1988). In 2016, four Least Tern nests were found along the South Platte River between Brule and Ogallala when Lake McConaughy was at full pool (Dave Zorn, CNPPID, personal communication). The only records further west are of one near Oshkosh, Garden Co 5 Jun 2018, two at Hackberry Lake, Crescent Lake NWR, Garden Co 7 Jun 2016, and one at Oliver Reservoir, Kimball Co 16 Jun 2013.

In the lower Platte River Valley, between 200 and 400 nests have been recorded since 2008 (Brown et al 2016). The distribution of nesting birds is variable and is associated with habitat conditions on the river. In 2009, as many as 264 nests were located on river sandbars, but in 2015 a total of 310 nests were located at off-river sites while only eight nests, initiated late in the season once water levels declined, were found on river sandbars (Brown et al 2016).  An earlier study by Ducey (1982) at six sites in the Lower Platte River west to Saunders Co found 54 adults in 1981 and 43 in 1982.

The only known nesting away from river systems was the five nests found by Tout (1902) on an exposed bank at what is now Kirkpatrick Basin North WMA, York Co during the summers of 1896 and 1897. Jorgensen (2012) concluded that nesting might occur on occasion in such circumstances, but there are no other breeding records for the Rainwater Basin, and fewer than ten summer records overall in 90 years (Jorgensen 2012). However, this species does nest regularly at Cheyenne Bottoms and Quivira NWR in central Kansas (Thompson et al 2011).

Nesting usually commences in late May shortly after arrival. Least Terns will regularly re-nest if nests initiated early in the season fail; re-nests may be initiated into the latter half of July. However, breeding activity attenuates sharply in August and nests initiated late are often abandoned. Occasionally, tern chicks are abandoned by adults (Jenniges and Plettner 2008). A nest with eggs of both Least Tern and Piping Plover was found in northeastern Nebraska on the Missouri River in 1983 (Ducey 1984).

Most reports of obvious migrants away from breeding locations begin in late Jul, although a count of 18 near Valley, Douglas Co 27 Jun 2020 was likely of a post-breeding grouping. This species quickly departs in early to mid-August and by late August most are gone. 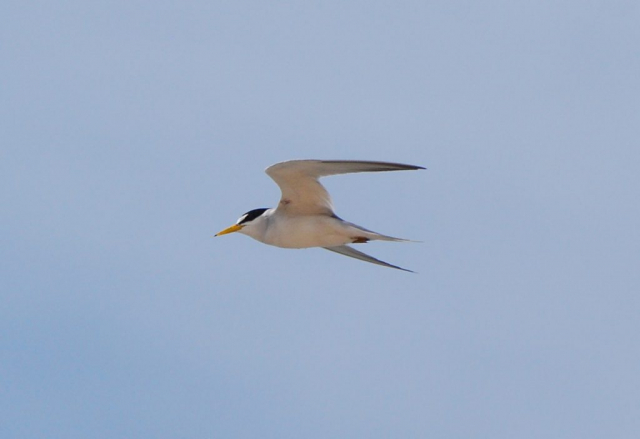 Mary Bomberger Brown and Lauren R. Dinan reviewed an earlier draft of this species account and provided numerous helpful comments that improved the content and composition.

EA Engineering, Science, and Technology, Inc. 1988. Status of the Interior Least Tern and Piping Plover in Nebraska (Period of Record through 1986). Lincoln, NE.