Comments: The tangible history of this species in Nebraska is based entirely on specimens from Red Willow Co shot by hunters and provided to HMM by an H. Frates (Swenk MS, in Sharpe 1968). Sharpe (1968) examined some of the specimens and concluded they were undoubtedly Lesser Prairie-Chickens, although he (Sharpe et al 2001) later came to doubt the provenance of the Red Willow Co specimens. There is documentation of the collection of seven specimens (note card handwritten by Swenk, NOU Archives), a male 17 Sep 1924 and four males and two females 7 Oct 1925, the latter comprising an entire flock of six (Swenk note card). Of these seven specimens, dispositions according to Swenk (note card) are as follows. The male shot 17 Sep 1924 was sold to E. S. Hopkins of New Orleans “for the museum there” (Brooking letter to Swenk, 13 Dec 1930; NOU Archives). Of the six birds shot 7 Oct 1925, a male was traded to Swenk by Brooking and is now UNSM ZM14210 (Swenk, Notes After 1925), and a male was “disposed of” to C. A. Black of Kearney. Swenk (note card) lists measurements for the latter specimen: it was described as a “typical light-colored bird, L:14.5, W (R) 8.125, chord 199 mm, W (L) 8.25, chord 200 mm, culmen 15, DBB [depth at the base of the bill] 9.25, TS [tarsus] 42, and tail 96.5”. The date given, 2 Oct, appears to be a typo, and should be 7 Oct (Swenk note card). The remaining four specimens, two males and two females, were “left in the Brooking Collection” (Swenk note card). Swenk (note card) lists and gives measurements of these four specimens at HMM, a female HMM 3330, and three specimens labeled HMM 3071, two males and a female. Currently, however (2018), there are six specimens at HMM, accessioned in 1931 (HMM Accession Records), none individually labeled; thus it must be assumed that at least two of the six specimens at HMM were from locations other than Red Willow Co, Nebraska.

Intriguingly, Swenk, in a letter to W. E. Clyde Todd of the Carnegie Museum, Philadelphia dated 28 Nov 1930, stated that he was aware of only seven other specimens in Nebraska, all mounted specimens. This total must have included mounts of birds collected elsewhere than Nebraska.

It is difficult to explain the apparently isolated presence of an apparently small number of Lesser Prairie-Chickens in southwest Nebraska in 1924-1925, all of which apparently were collected by hunters and there being no other reports from that area before or since. Swenk (1915 Nebraska Blue Book) stated the species was “formerly common, now extinct in Nebraska”, and Wolcott (1909) stated it had not been seen in Nebraska since the early 1870s. There is no record of this species occurring between Nebraska and the northernmost extent of its historic range in southeast Colorado and southwest Kansas (Rakestraw 1995). None of the literature (Baker 1953, Jones 1963, Sutton 1967) documents range shifts or population expansion as in the case of the Greater Prairie-Chicken. However the habitat where the birds were collected is sand sage prairie, one of the characteristic habitat types occupied by the species, and Sharpe (1968), in an attempt to explain their occurrence, concluded: “It is my contention, therefore, that the former presence of Lesser Prairie Chickens in Nebraska was the result of a short-lived post-settlement range extension, paralleling that which occurred with the Greater Prairie-Chicken.” Thompson and Ely (1989) stated that just prior to the dust bowl era of the 1930s this species was especially abundant, at least in Kansas. Possibly supportive of Sharpe’s original hypothesis are mounts at the Plainsman Museum, Aurora, Nebraska from the William Townsley collection (Brooking 1933) of three unlabeled Lesser Prairie-Chickens (174-104, -106, -107) with accession notes stating that the species was a “Native of Nebraska, non-migratory, found in the Sandhills country- sage and bluestem grasses.” One of these three, 174-104, was mounted in 1903, a date that might support the ephemeral occurrence of the species in Nebraska, although the specimens may not have been collected in Nebraska.

However, in subsequent years, Sharpe came to have doubts about his 1968 conclusion (Sharpe et al 2001; Introduction herein “The Swenk Years (1900-1940”). According to a paper read to the Wilson Ornithological Society in 1931 by Swenk (included in full in Sharpe 1968), it was believed in Bruner’s time and later that “somewhere in the Nebraska sandhills there might still survive a few of the Lesser species, even though none had been reported by hunters for many years. Mr. A.M. Brooking of Hastings particularly interested himself in this quest. Finally, in the fall of 1924, he was rewarded by receiving two [sic] fine male specimens of the Lesser Prairie Chicken from Red Willow County, Nebraska…” Swenk went on to say that the following fall Brooking “enlisted the help of local hunters” and “secured” five additional specimens, presumably those discussed above. The involvement of hunters presumably compensated for providing this unique group of specimens, and the presence of certain other unique specimens obtained by Brooking and prepared by taxidermist Cyrus A. Black and held in the Hastings Municipal Museum raises doubts that collectors obtained these specimens in Nebraska (Sharpe et al 2001). The presence of six unlabeled Lesser Prairie-Chicken specimens at HMM when a maximum of four from Red Willow Co were there (see above) suggests acquisition by HMM of specimens from other locations. In defense of Brooking, we point out that at the time, it was not well known how far north or east the ranges extended of certain species such as Lesser Prairie-Chicken and Black-capped Vireo. Over the last 90 years there has been no confirmation of the continued presence of either species in Nebraska.

Evidence for occurrence of Lesser Prairie-Chicken in Nebraska apart from the above specimens is at best anecdotal. As stated by Swenk (MS, in Sharpe 1968), “… the writer has endeavored for years to secure some reliable data concerning the former status of the Lesser Prairie Chicken in the state, but with rather indifferent results.” Swenk cited several sight reports from Cherry Co east to Cuming Co, some referring to smaller, paler birds as “runts”, presumably by comparison to Greater Prairie-Chickens. Swenk concluded that the former range of Lesser Prairie-Chicken as outlined by authorities such as Ridgway (1877), who questioned its occurrence in Nebraska, indeed included Nebraska, and described it as “… formerly summered in small numbers over much of the sandhills region of central Nebraska … and in winter moved southward to the Platte Valley and eastward to the more eastern counties of the state.” Swenk (Notes Before 1925) mentioned that in 1901 Black shot a bird at Cozad, Dawson Co that he believed was a Lesser Prairie-Chicken, but it was not preserved. Of interest is a comment in Bent (1932) that this species had been reported from Nebraska, but that “in the lack of specimen evidence it is thought that the records refer to [Greater Prairie-Chicken]”. Evidently Bent was not aware of the specimens discussed above, and is referring to different reports, possibly those mentioned by Bruner et al (1904) and by Swenk (MS, in Sharpe 1968); the latter involved “a number” shot in Cuming and Washington Cos in the early 1870s and one seen by Bruner near West Point during the winter of 1871-72. It seems that indeed these birds were misidentified Greater Prairie-Chickens.

At one time the Lesser Prairie-Chicken range was thought to have extended to southeast Kansas and southwestern Missouri; although reports from Missouri (AOU 1957) have been questioned (Robbins and Easterla 1992), more recently Robbins (2018) allowed that two specimens obtained at New York City’s Fulton Market by a G. N. Lawrence in Jan 1877 were indeed collected near Pierce City, Missouri. Lawrence obtained three further specimens at Fulton Market purportedly harvested in Nebraska and currently held at the USNM: a male taken 8 Feb 1878 (USNM 84554), and two females 26 Feb 1878 (USNM 84555, 74008). Correspondence to Swenk from Herbert Friedman at USNM indicates that Dr. Friedman examined the USNM specimens and confirmed their identity as “pallidicinctus” (Lesser Prairie-Chicken). Since it is unlikely Friedman misidentified these specimens, it must be concluded they were not in fact harvested in Nebraska.

Recently, there has been northward expansion in western Kansas aided by establishment of Conservation Reserve (CRP) Program grasslands (Thompson et al 2011); as of 1992-97, the period within which the Kansas Breeding Bird Atlas study was carried out, the northernmost report of Lesser Prairie-Chicken was in extreme southeast Scott and extreme southwest Lane Cos (Busby and Zimmerman 2001). Since then, the north edge of the range has extended into Wallace, Logan, and Gove Cos, as well as extreme southern Sherman Co (J. Pitman, formerly Kansas Department of Wildlife and Parks, Emporia, personal communication), approximately 112 km (70 miles) from the Nebraska border. This northward expansion has allowed this species and Greater Prairie-Chicken to come into contact and hybridize (Hagen and Giesen 2020), although the percentage of hybrids is stable at less than 5% (J. Pitman, personal communication). Further expansion northward of genetically unmixed Lesser Prairie-Chicken into the range of Greater Prairie-Chicken seems unlikely. 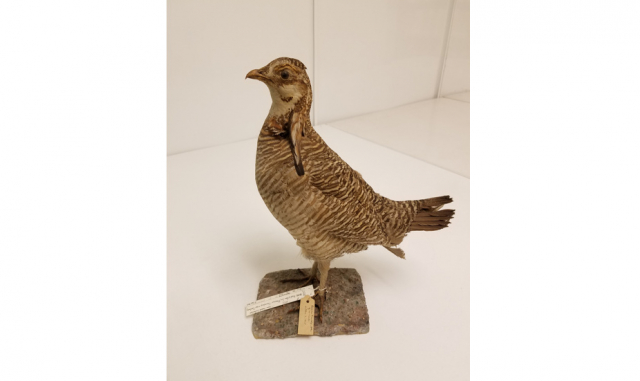 Photograph (top) by Ross Silcock of a Lesser Prairie-Chicken specimen (UNSM ZM14120) collected near Danbury, Red Willow Co 7 Oct 1925. The specimen is housed and maintained at the University of Nebraska State Museum and was legally salvaged or collected. We thank Thomas Labedz for facilitating the photographing of this specimen for the Birds of Nebraska – Online. Jeffrey J. Lusk provided numerous helpful comments that improved this species account.