Taxonomy: No subspecies are recognized (Gill and Donsker 2017).

Almost all reports of this species in Nebraska are at known breeding locations. It is migratory in northern parts of its range, as in Wyoming, where it is a “summer resident” May-Sep, with very few records in Oct and none in Dec (Faulkner 2010). However, Tallman et al (2002) describe it as a “locally uncommon Permanent Resident” in the Black Hills of southwest South Dakota, where it retreats to lower elevations in winter in search of acorns.

Summer: This species is now restricted in summer to the Pine Ridge (Rosche 1982), but it formerly also occurred in the Wildcat Hills of Scotts Bluff and Banner Cos (Bruner et al 1904). It appears to be only an irregular breeder in Nebraska; Mollhoff (2000) estimated that the total annual breeding population in the state was no more than 10-20 pairs. Tallman et al (2002) cite Peterson (1990) regarding timing of occupation of pine forest after burns by various woodpecker species; Lewis’s Woodpecker is one of the last to appear, usually after several years and generally only in very large, burned areas.

Prior to the Dead Horse Canyon fire in Dawes Co in 1973, this species was as often recorded away from the Pine Ridge as not, suggesting that it was merely a migrant or vagrant in the state. Since that fire, it has summered and bred irregularly (Mollhoff 2022). Irregular breeding of this species in Nebraska is probably due to Nebraska being at the periphery of the species’ range, the irregular availability of burned pine woodland habitat, relatively open pine forest with understory, and competition with its congener, Red-headed Woodpecker. After using burned forests for breeding, birds may move to unburned forest after young fledge (Vierling et al 2020).

Following the 1989 Fort Robinson fire, Lewis’s Woodpecker was not found in summer until 1996, when two were located in Smiley Canyon 1 Aug 1996. There were no further reports and breeding was not confirmed. Two were found there 4 Jun 2020 and seen by many through 24 Jun.

The most recent and only known currently active (2021) breeding area is lower Sowbelly Canyon. On 16-19 Aug 2010, a pair with a juvenile was found there that may have been produced locally. However, it is possible the family group migrated into Nebraska from a different area (i.e., Black Hills). Lewis’s Woodpeckers, though, have been in the area since 2010, with best count seven in Sowbelly Canyon and the neighboring Pants Butte area 31 Jul 2012. Two were present 22 Aug 2020, singles 17-31 May and 12-28 Aug 2021.

A potential new location is the Douthit fire of 2012 near Joder, Sioux Co, where two pairs were present 6 Jul 2020. One at the Hudson-Meng Bison site, Sioux Co 23 Jun 2021 may have been from this area.

Summer reports away from these known breeding areas are almost non-existent and there have been none since 1987.

The only Fall reports away from ponderosa pine habitat are 18-20 Sep 2008 Cherry Co, 18 Sep 2010 juvenile Lake McConaughy, Keith Co, two on 29 Sep 2016 Niobrara Valley Preserve, Keya Paha and Brown Cos, and 23 Sep 1989 Knox Co, the easternmost fall report for the state. There is a report without details from NNF Bessey, Thomas Co (Bray 1994).

Winter: The only record, completely unexpected in the east, was of one at Schramm Park SRA, Sarpy Co, first reported 18 Dec 2019 and still present 18 Jan 2020 (eBird.org). 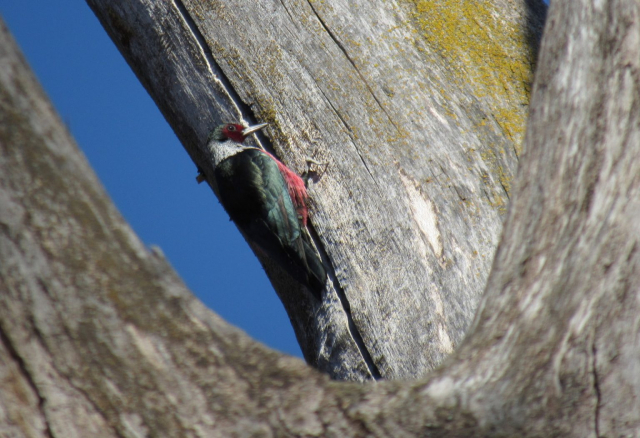