Taxonomy: There are four subspecies recognized, two in Eurasia and Africa, and two in North America (Gill and Donsker 2017): tuftsi from western Canada to northern Mexico, and wilsonianus from south-central and southeast Canada to south-central and eastern USA. Marks et al (2020) stated “Given nomadic tendencies of [Long-eared Owl], subspecific status in North America is questionable and needs further study.”

According to AOU (1957), the eastern subspecies wilsonianus occurs in Nebraska as a breeding bird and tuftsi is cited as breeding east to Saskatchewan. Thus, one banded as a juvenile in Alberta and recovered in Nebraska in early Dec would have been tuftsi, suggesting that at least some birds reaching Nebraska in winter represent this subspecies.

Resident: Although Marks et al (2020) show the breeding range extending south only to the northwestern third of Nebraska, nesting has been documented from all parts of the state; it is not a predictable repeat nester at any known location, however. It has been suggested that some Nebraska birds move south after breeding (Haecker et al 1945), but there is no evidence to support this; because breeding birds are thought to be resident except for northern parts of the breeding range (Marks et al 2020), it is highly likely that Nebraska breeders are resident. Indeed, Marks et al (2020) state: “Presumably a regular migrant in n. Canada, but commonly winters in breeding range throughout U.S. and s. Canada. Several individuals trapped at nests in Idaho and Montana recaptured at nearby communal roosts in winter ….” At Smith Lake WMA, Sheridan Co, reports are year-round, with as many as seven during 10-23 May 2007 (Steven Jones, pers. comm.).

Nesting occurs statewide; most breed at one year of age (Marks et al 2020).

Arrival is in early Nov. Long-eared Owls are most numerous in Nebraska during Nov-Mar, as birds arrive from north and northwest of Nebraska. Birds banded as juveniles in Alberta and Manitoba were recovered in Nebraska in early Dec and early Mar, respectively. These banding data suggest that birds reaching Nebraska in winter include at least some tuftsi (see Taxonomy).

Departure of wintering birds occurs by early Apr and birds seen at that time may also be migrants; one at Holmes Lake, Lincoln 6 Apr 2013 was an apparent migrant, as none had wintered there. Reports after about 10 Apr are probably of breeders.

Bent (1938) suggested that winter congregations consist of family groups, which may account for roost sites developing some degree of permanency as demonstrated by use in successive winters. A roost site near Cunningham Lake, Douglas Co was used for at least six winters; Ken Geluso (personal communication) has noted that this site was occupied 21 Nov- 28 Mar, with arrival related to developing snow cover in South Dakota, and that as many as 25 birds may be present although some or all may leave if snow reduces prey accessibility.

Roost sites are typically found in dense stands of vegetation, frequently junipers, as may develop in shelterbelts or on overgrown grazing land. Chosen sites are usually near a foraging area of open habitat such as grassland or fallow cropland that supports small rodents such as voles (Microtus sp.). 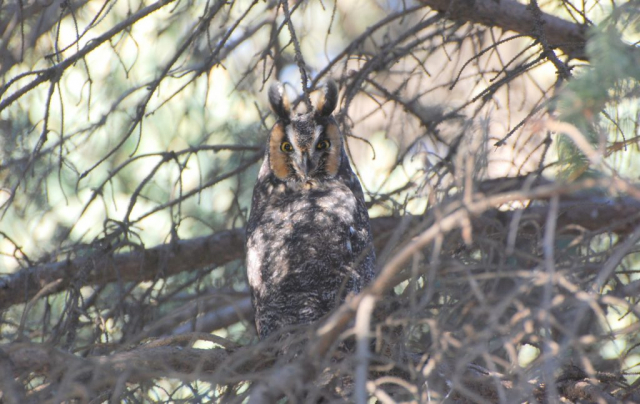