This species is a very early migrant, generally arriving in early to mid-Apr.

Summer: This species breeds locally in eastern and north central Nebraska primarily along forested streams and creeks with muddy, rocky, or gravelly substrate in hilly areas with sufficient declivity to expose emergent freshwater seeps. Examples of this habitat are found within Missouri and Platte River bluffs, the Nemaha Ridge in Johnson, Pawnee, and Richardson Cos, the Sandstone Prairie in Jefferson Co, the “Bohemian Alps” in Butler Co, and spring-branch canyons in northeastern Cherry Co. This species can also occur in closed canopy riparian settings in relatively flat regions such as Wilderness Park in Lancaster Co.

Extensive surveys have been conducted at Platte River SP in Cass Co, Indian Cave SP in Nemaha and Richardson Cos, and creeks and streams on public lands in Jefferson Co. Discussion of each follows.

At Platte River SP, a nest was located in 2010 and photographed 16 and 21 May 2010. Studies in the park, along Stone Creek, began in 2012 (Shari Schwartz, John Carlini, personal communication), and in 2013 five territories were identified, with juveniles noted in four of these on 26 Jun. The four territories occupied on Stone Creek in 2014 along with the three nests located were mapped (Silcock 2014). A nest in 2016 and two in 2017 on Stone Creek were all lost during flood conditions; this is a recurring cause of egg and nestling losses along streams that tend to flash flooding after heavy rains (Shari Schwartz, pers. comm.).

At Indian Cave SP in 2015, all of the drainages were surveyed; six territories were discerned, all on three adjacent streams near the south end of the park. However, Louisiana Waterthrushes have occurred on two drainages in the Nemaha Co part of Indian Cave SP but were not detected in 2015; we include these, for a total of eight. A total of nine adult and four juvenile waterthrushes were identified in 2015 plus one of unknown age, and one active nest was located. All birds had departed by 25 Aug. The first confirmed breeding report from Indian Cave SP was of an adult feeding a fledged juvenile 25 Jul 1988 (Grenon 1988).

Louisiana Waterthrushes were first noted at Rock Creek Station SHP, Jefferson Co 8 May 2012. During extensive field work in 2016 along Rose and Rock Creeks and their tributaries, all in a portion of the Little Blue River drainage with shallow soils and limited agricultural development and referred to as the Sandstone Prairies (Schneider et al 2011), a surprisingly large number of territories and associated juveniles were discovered. At Rock Creek Station SHP, seven territories were occupied, with adults observed feeding 1-3 fledglings on three of them and two nests were documented on a tributary of Rock Creek. At Rose Creek WMA, there were five territories, with an adult feeding a fledgling on one of them as well as a lone foraging juvenile on a seep stream; and there were four territories at Rose Creek West WMA (Shari Schwartz, personal communication). At least three territories at Rose Creek WMA were occupied 11 Jul 2017.

A startling discovery by Renee Tressler was of a breeding pair at Fort Falls, Fort Niobrara NWR, Cherry Co 31 May 2021, followed up by recordings 6 and 14 Jun and the presence of two fledglings there 6 Jun. One was in a spring branch canyon just south of Fort Niobrara NWR headquarters 17 Aug (Renee Tressler, pers. comm.). Amazingly, two territorial singers were found at nearby Smith Falls SP, Cherry Co 7 Jun 2021 by Paul Dougherty. Thus it is likely that surveys of the often-remote spring branch canyons in the area will find a population of Louisiana Waterthrushes; whether this is a long-standing population recently discovered is at present conjectural (Silcock 2021, in press). The only previous possible evidence for breeding between Ponca SP and Cherry Co was the presence of one at Schindler Creek, Knox Co 2-22 Jul 2009 (Mark Brogie, eBird.org). The identity of a waterthrush at Fort Falls Trail, Fort Niobrara NWR, Cherry Co 10 Jul 2019 was equivocal, but recent events suggest it was a Louisiana. An intriguing possibility is that an American Dipper reported 1 May 1977 some 8-10 miles east of Fort Falls that “exhibited the bobbing motion that is characteristic of [American Dipper]” (Maddux 1977) may have in fact been a Louisiana Waterthrush.

Reports for two or more years in the Lower Platte River hills at locales other than Platte River SP have come from Schramm SP, Sarpy Co where 1-2 active territories have been reported throughout the years (Donald and Janis Paseka, personal communication) since 16 May 2009, and from Cass Co where two birds were along a wooded creek on 30 Apr 2015 and one along a slow moving stream 21 Apr 2021 at the Bay Hills Golf Course, individuals were observed at Eugene T. Mahoney SP on 26 Apr 2017 and 29 May 2021, and birds on two territories behind the Platte River eastbound rest area were reported on 16 Apr 2017 and from Apr-Aug in 2021. Elsewhere, a territory identified on a stream at Bluestem Lake SRA, Lancaster Co 14 May 2019 was again occupied 16 May 2020.

Explorations in recent years of public lands encompassed by the Nemaha Ridge in Johnson, Pawnee, and Richardson Cos have revealed this species regularly utilizes the forested streams of that uplift. In Pawnee Co, a bird was observed on Rock Creek near Steinauer, Pawnee Co 26 Jun 2006, one was recorded at Table Rock WMA 15 May 2019, a pair was seen at Lores Branch WMA on 19 May 2019, and one was recorded at 704th Road on 5 Jun 2021. In Johnson Co, one bird was detected at Osage WMA middle area on 17 Jul 2016, two territories were confirmed in 2019, and one bird was recorded on 2 May 2021. Also in Johnson Co, individuals were observed at Hickory Ridge WMA and Twin Oaks WMA on 12 Jul 2016. In Richardson Co, a pair was reported at Rock Creek on 19 Aug 2017, and individuals were reported next to 645 Blvd on 16 May 2019, at Stanton Lake on 30 Apr 2021, and at Four Mile Creek WMA and Kinter’s Ford WMA on 15 May 2021.

Single reports from sites elsewhere where habitat may be suitable for breeding, but without evidence, are from Hummel Park, Douglas Co on 15 Apr 2006, Rulo Bluffs, Richardson Co one seen 8 Jul 2006, one near Camp Wakonda, Sarpy Co on 10 May 2019, one at Triple Creek WMA, Otoe Co on 21 Apr 2021, and one in southern Gage Co 30 Jun 2016. In Butler Co, a territory along Road U was occupied 28 Apr 2015 and again in 2021, and on 4 May 2021, two singers were recorded along Road VW, and another by Oak Creek Trail. A singer was northeast of Oak Glen WMA, Seward Co on 15 Apr 2017. Individuals were observed on private property in Jefferson Co at 709 Rd 3 May 2016, Moon’s pasture 18 May 2019, and 704th Rd 5 Jun 2021. In Thayer Co, singles were reported 14 Jun 2010 and 4 May 2015, a singing bird at Meridian WMA 17 Apr 2017, and one recorded at Road C on 5 Jun 2021. Removal of invasive Eastern Red Cedar trees at Grove Lake, Antelope Co. five months prior to a 24 May 2021 observation appears to have restored a desirable ratio of deciduous habitat for two species previously unrecorded at this location, Louisiana Waterthrush and Wood Thrush (Kyle Schumacher, personal communication).

Delineation of territories in 2014-2017 found that there were at least 37 territories in the state (Shari Schwartz, John Carlini, personal communication, eBird.org, accessed May 2017). Among these, 9 nests were found, and there were 14 territories with juveniles observed.

An updated count of known territories for 2018-2021 (Shari Schwartz, pers. com., eBird.org, accessed 3 Sep 2021) found, in addition to the 37 above, 29 newly discovered territories for a total of 66, implying there are at least 66 breeding pairs of Louisiana Waterthrushes in the state through 2021. Satellite photos indicate potential additional habitat may exist in places that are difficult to access and have never been surveyed, and because this species appears to utilize all of the limited habitat available here at the edge of its range, it may be reasonable to predict breeding on any suitable habitat in eastern and north-central Nebraska.

A total of 63 individuals were counted in 2016: 18 on tributaries of the Missouri and Lower Platte Rivers, 36 in the Little Blue River drainage, five on waterways between Lancaster and Johnson Cos, two near Peru, and two at Fontenelle Forest.

Louisiana Waterthrushes leave early, often in mid- to late Jul, but generally by mid-Aug, with few reports in Sep. At Platte River SP in 2014, all adults had departed by 1 Sep.

The only fall report away from the breeding range is of one at Bow Creek, Cedar Co 22 Jul 2016.

Comments: The history of this species in Nebraska is inconsistent and poorly documented. Around 1900 it bred “rather commonly in suitable localities along the bluffs of the Missouri River at Omaha and Peru, and in Richardson Co” (Bruner et al 1904). Rapp et al (1958) echoed Bruner et al (1904) but added that it was a summer resident “as far west as Lincoln Co”, a statement with no supporting evidence, then or now; Tout (1947) listed it as a migrant. However, Johnsgard (1979) did not include Nebraska in this species’ Great Plains breeding range and in 1980 stated there was “no evidence of current breeding in the state” (Johnsgard 1980). By 2001, however, Sharpe et al (2001) considered Louisiana Waterthrush a “Rare regular breeder east” based on breeding records by Bedell (1982) and Grenon (1988), although Johnsgard (2009) did not include the species in the regular breeding range and did not mention any breeding records in Nebraska. Field work from 2010 to date by Shari Schwartz, John Carlini, Ross Silcock, Sam Manning, Joel Jorgensen, and Stephen Brenner has revealed a significant population in the state, with an estimate in 2014-2021 of at least 66 active territories (see Summer), along with 10 nests found and numerous reports of adults feeding young (eBird.org, accessed Sep 2021). Recently, Johnsgard (2013) updated his account of the species, stating “Confirmed breeding during the atlasing years [Mollhoff 2001] was limited to Washington and Richardson counties … and breeding has been suggested or confirmed for Fontenelle Forest, Neale Woods and Platte River State Park”.

Despite the large gap in reports of this species from the early 1900s through 1981, the single report during this period by Garrett (1944) of two nests at Fontenelle Forest in 1944 suggests that there may have been a population of Louisiana Waterthrushes in Nebraska throughout. There was another gap of about 25 years before Bedell (1982) and Grenon (1988) presented the next reports of confirmed breeding. Because its specialized habitat generally exists in remote and poorly accessible locations, finding and studying this species can be difficult even for observers familiar with its song and call notes. We believe that few observers have undertaken the challenge of locating nests, or even locating the species; there are no Nebraska BBS data on Louisiana Waterthrush (Sauer et al 2017), presumably since BBS protocol does not easily access waterthrush breeding habitat. For these reasons, we believe Louisiana Waterthrush has been present in Nebraska as a breeding bird since Bruner’s time but was not looked for and thus remained largely undetected for nearly a century. 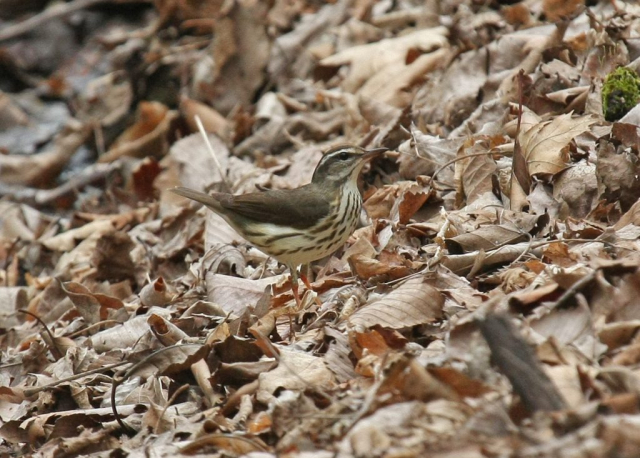 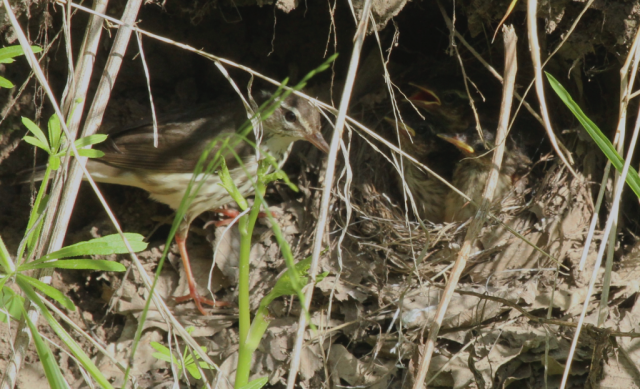 Shari Schwartz and John Carlini reviewed this species account and provided numerous helpful comments that improved its content and composition.