Taxonomy: Two subspecies are recognized (Pyle 1997, Pitocchelli 2020): tolmiei, breeding on the Pacific slope from Alaska and Yukon south to southern California, and monticola, breeding from eastern British Columbia east to southwest Saskatchewan and south through southern Oregon and the Rocky Mountains to Coahuila and Nuevo León. Some earlier authors separated eastern birds within monticola, including those breeding in South Dakota, as austinsmithi (Pyle 1997).

Faulkner (2010) stated that breeding birds in the Laramie Mountains and Black Hills of Wyoming are monticola, as are migrants through the state. The species is an “uncommon summer resident” in the Black Hills of South Dakota (Tallman et al 2002).

Migration is from mid- to late May.

This species is a regular migrant in small numbers in the northwest (Rosche 1982) and straggles eastward. Its distribution in Nebraska may be thought of as a mirror image of that of Mourning Warbler. In the Lake Ogallala area, Keith Co, MacGillivray’s Warblers banded 14 May-4 Jun all had “obviously incomplete, rather thick white eyerings” (Brown et al 2012).

Additional probable records are of one at Geneva Cemetery, Fillmore Co 16 May 2009, described as having “bright eye arcs”, and a Mourning-like bird with a “broken eye-ring” in Platte Co 28 May 2014.

Summer: MacGillivray’s Warbler is an uncommon breeder in the Black Hills of South Dakota (Tallman et al 2002), where it occupies riparian deciduous habitats with shrubs (Peterson 1990). Breeding also occurs in mountains of Wyoming (Faulkner 2010). In the 19th century it might have bred in northern Sioux Co where it was found in riparian thickets along streams draining northward into the Hat Creek drainage (Cary 1902). Rosche, however (1982), stated that Cary’s assumption “must be discounted” since “the nearest known breeding habitat is in the higher reaches of the Black Hills.”

The only reports suggestive of breeding since are of two birds at Gilbert-Baker Campground, Monroe Canyon, Sioux Co 25 Jul 1999, one of which may have been a young bird (Silcock 1999), and a singing bird there 14 Jun 2003 (Silcock 2003). Another was at East Ash Creek, Dawes Co 29 Jun 2022. Since habitat appears suitable in the western Pine Ridge, breeding would not be unexpected.

Migration is from late Aug through early Oct.

There are these additional non-accepted eastern reports: a report of one at Fontenelle Forest, Sarpy Co 14 Oct 1990 was not accepted by the NOURC (Grenon 1991), and a specimen, UNSM ZM10776, taken at Roca, Lancaster Co and labeled as this species, is not now identifiable. One photographed in Dodge Co 8 Sep 2007 was not considered separable from Mourning Warbler based on the photo (Brogie 2008). 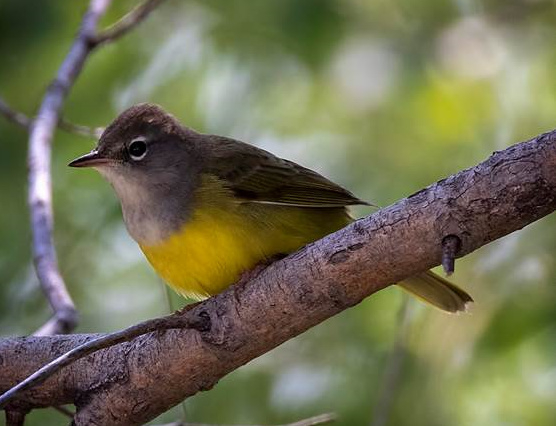 Cary, M. 1902. Some general remarks on the distribution of life in northwest Nebraska. Proceedings of Nebraska Ornithologists’ Union 3: 63-75.