The Birds of Nebraska – Online has been up and running for nearly ten months. Even though little has changed for what we know about most species, new information for a small number of birds is providing an impetus to update and revise a few species accounts. When a substantive revision occurs, it is our intent to do a post here informing our readers about the changes and why they were made. One of the first substantive changes that we are making is for the Black-billed Magpie. As discussed in the original species account, Black-billed Magpie numbers have been declining and its range has been retracting in Nebraska, a trend that began in the early 2000s. The likely cause of the decline is West Nile Virus (WNV). Also in the original species account we showed two maps. One map illustrated the range at the end of 2017 or early 2018 and the other depicted the range around the year 2000 or 2001, just before WNV swept across the state. We have been paying close attention to where Black-billed Magpies have been reported since the original maps were published and, unfortunately, we believe another revision is in order. Below, we show all three maps in order from oldest (circa 2000) to newest (2019). If you are unfamiliar with your style convention, purple shows permanent range and light blue shows winter range.

Another way of viewing the change in distribution is combining the permanent ranges for the three time intervals, although this requires us to deviate from our style convention. 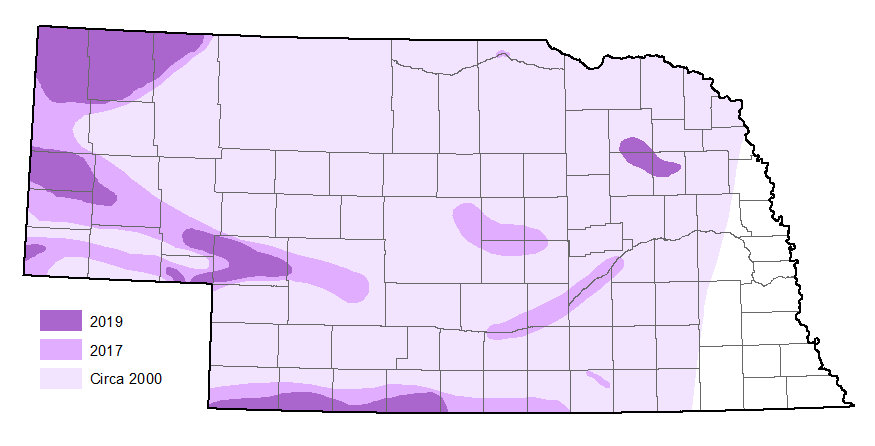 A few comments about the Black-billed Magpie’s current distribution. First, despite an overall reduction in the range, the small numbers in the Norfolk area in northeastern Nebraska appear to be hanging based on a few recent sightings. It will interesting to see whether or how long this population can persist considering it is becoming more and more isolated. One area of uncertainty is along the Lodgepole Creek and Bighorn Escarpment in the southern Panhandle. There is little evidence that Black-billed Magpies still regularly occur in these areas. Finally, even though our new range map shows the Black-billed Magpie’s permanent range has declined dramatically since late 2017, we may still be over-estimating its current extent. Where to draw the boundaries is based on limited data, which are derived primarily from eBird (www.eBird.org). One of our hopes is that by updating this map and bringing it to public attention, we may hear from a few individuals that have information that can help us improve it. If you have recent sightings of Black-billed Magpie that contradicts our latest range map, we’d love to hear from you.