Taxonomy: Two subspecies are recognized, beringiae of Alaska and fedoa of central and south-central Canada and north-central United States (Gill and Donsker 2017).

Changes Since 2000: All but one of the breeding records have occurred since 2000. Whether this reflects previously undiscovered breeding birds in Nebraska or an expansion of the South Dakota breeding range is unknown.

Migration begins about the second week of Apr and highest counts are in the short period 22-30 Apr.

Marbled Godwit has an unusual “criss-cross” migration pattern in the mid-continent of North America (Olsen et al 2014). Using satellite telemetry, Olson et al (2014) clarified migration patterns of godwits from breeding populations in the western USA and Canada and at James Bay, northeast Canada. Godwits wintering on the southern Atlantic Coast migrated northwestward across eastern Nebraska in spring and summered in North and South Dakota (and presumably Nebraska). Since arrival in North and South Dakota is tightly timed 15-22 Apr (Higgins et al 1979), passage through Nebraska of these breeders would occur in or just before this period. Peak movement in Nebraska occurs 22-25 Apr, however, suggestive of larger numbers passing through the state to the northern Great Plains breeding range from coastal southern California and northwest Mexico (Olsen et al 2014) perhaps 10 days after those heading for the Dakotas. Indeed, arrival on breeding areas in Saskatchewan and Alberta is in the last week of Apr and the first half of May (Gratto-Trevor 2020). The small James Bay breeding population of around 2000 migrated northeastward from wintering areas in southern California and northwest Mexico (Olson et al 2014). Far fewer godwits occur in Nebraska in May than in Apr, although there is a small increase noticeable 10-20 May; these may be straggling immature non-breeders, or, perhaps more likely, migrants to the James Bay breeding area. Possible examples of the latter were the 25 at Jack Sinn WMA, Lancaster Co 18 May 1997 and eight at Valentine NWR, 9 May 2018.

Summer: Prior to 1990 reports of breeding in Nebraska were few. A report of nesting near present-day Columbus 9 Jun 1820 was reported by Thomas Say (James 1972), and “a godwit involved in homemaking” was at a pond in Madison Co in 1876 (Ducey 1988). Bruner et al (1904) thought it “almost certain” to breed in the state but provided no evidence. It apparently declined rapidly by 1900 during the homestead but may be re-occupying its former range (Mollhoff 2022).

Recent breeding records began in 1990, when adults were defending young in Dawes Co (Rosche; Grzybowski 1990). The only subsequent report from Dawes Co is of an aggressive pair 20 Jun 2006 (Mollhoff 2006). In 2008, two territorial pairs were 12-15 miles southeast of Alliance, Box Butte Co 20 Jun.

There are fewer records from Garden Co; One was photographed north of Crescent Lake NWR, Garden Co 2 Jul 2016, and in 2022 two were near Lakeside but in Garden Co 10 Jun and two were at Wood Lake 16 Jun.

There are reports in the period 8-16 Jun that are likely immature non-breeders not completing northward migration or failed breeders moving southward. These are 9 Jun 2011 Knox Co, 10 Jun 2011 Knox Co, and 12 Jun 2009 Garden Co.

Migrants are found as early as late Jun, when flocks become evident, and most have moved through by the end of Aug. In contrast to spring, fall migrants are rare east of the Panhandle and Keith Co; there are only 35 reports east of there, 19 of these in the eastern Rainwater Basin 5 Jun-24 Oct (Jorgensen 2012). Based on Olson et al (2014), it is plausible that fall migration through Nebraska from breeding areas in the Dakotas is non-stop to the Atlantic Coast, resulting in few easterly sightings. Sightings in western Nebraska in fall conceivably represent migrants from the James Bay breeding population, which migrates somewhat later (Olson et al 2014). 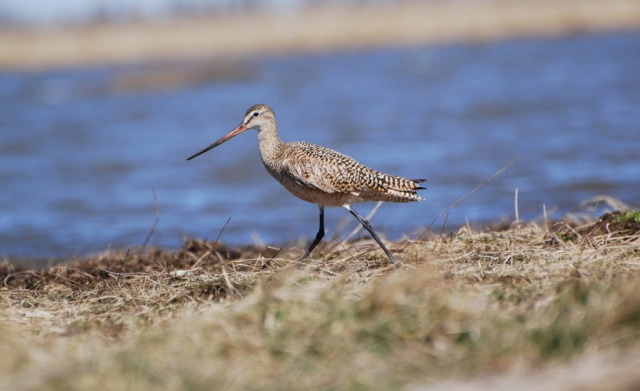 James, E. 1972. Account of an expedition from Pittsburgh to the Rocky Mountains under the command of Major Stephen H. Long, from the notes of Major Long, Mr. T. Say, and other gentlemen of the exploring party. Imprint Society, Barre, Massachusetts, USA.