Taxonomy: There are 13-15 subspecies recognized, often divided into five groups, although assignment of the subspecies to groups has been inconsistent (Pyle 1997, Clements et al 2016, Kroodsma and Verner 2020).

Kroodsma and Verner (2020) assigned the subspecies to three groups. Subspecies whose ranges include Nebraska were included in two groups, (1) the Western “plesius” group, including plesius breeding from southeast Idaho to south-central Colorado, Nebraska, and probably to New Mexico, and (2) a western part of the Eastern “palustris” group described as “Straddling or adjacent to the overlap zone between eastern and western Marsh Wren groups”, including iliacus, breeding from Manitoba, southwest Ontario, and southwest Michigan south to eastern Kansas and Missouri, and east to east-central Ohio.

Kroodsma (1988) found two demonstrably different Marsh Wren song types in Nebraska that were apparently separated by a 65 mile-wide “wrenless” corridor containing little or no suitable breeding habitat. This corridor extended southeastward from the South Dakota line through Boyd and Holt Cos, effectively isolating wrens from Sandhills marshes to the west from birds of northeastern Nebraska marshes. Later, however (Kroodsma and Verner 2020), considered this “wrenless” corridor part of an “overlap zone” between the two song types; eastern song type birds occur to some degree west of the corridor among western song types (Kroodsma 1988, Robbins 2014). Separation of the song types also occurs in the southeast; all singing birds found in summer in the eastern Rainwater Basin have been eastern types (Jorgensen 2012).

Arrival north of the Platte and North Platte river valleys is generally in mid-late Apr. Data from the southern two rows of counties in Nebraska, where Marsh Wrens do not breed, indicate that the last spring migrants pass through by mid-May. Reports after mid-May away from known breeding areas but in suitable habitat suggest breeding attempts; most other such reports are likely of tardy migrants.

Summer: On a statewide basis, Marsh Wrens breed commonly north of the southernmost two rows of counties (eBird.org, accessed October 2017, Sauer et al 2017); highest densities are in the western Sandhills, and lowest in the northeast. Good numbers breed at Wood Duck WMA, Stanton Co. Apart from the Rainwater Basin, where the species is believed to breed, there is only one mid-May through Aug record in the southernmost two rows of counties, 21 Jun 2016 Frontier Co.

Evidence is accumulating that Eastern Marsh Wrens may colonize some nesting sites in the south and east in late summer rather than upon arrival in spring, a pattern not dissimilar from Sedge Wren (see that species). Most arrive mid-Jul; there are numerous reports of Marsh Wrens arriving and singing vigorously in marshes where they were absent May through mid-Jul. In the Rainwater Basin, Jorgensen (2012) stated “generally absent in early summer (June); singing birds are usually located later in July and August at sites where they were absent earlier”. Relatively late-season breeding was observed in “atypical” habitat in Lancaster Co 26 Aug 1970 (Cink and Fiala 1971) and the presence of a newly-fledged young bird with an agitated adult at Jack Sinn WMA, Saunders Co, 22 Sep 2007 was confirmation of breeding there. This pattern has not been observed in western song type Marsh Wrens in Nebraska (Robbins 2015).

Birds begin to leave breeding grounds during Aug (Kroodsma and Verner 2020) and peak “true” migration probably occurs in the second half of Sep and early Oct; Johnsgard (1980) found that half the fall reports were in the period 8 Sep-10 Oct. Tout (1947) stated that his earliest fall date was 19 Sep. Migration ends by early Nov. 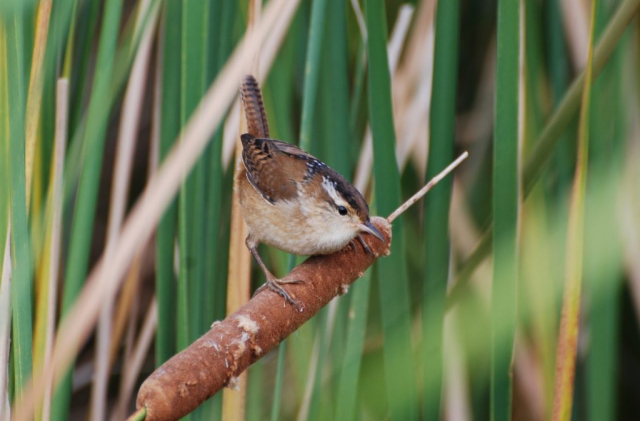