Taxonomy: Nine subspecies are recognized, six in Eurasia and three in North America: columbarius breeding in boreal Alaska and Canada, south to the northern USA but north of the range of richardsonii, suckleyi breeding Pacific Northwest, and richardsonii breeding central and south-central Canada to the north-central USA (Gill and Donsker 2017).

Columbarius and richardsonii occur regularly in Nebraska (Rapp et al 1958), but there is but a single record of suckleyi.

Richardsonii is a northern Great Plains prairie breeder, including northwest Nebraska (Wheeler 2003); it also nests in the Black Hills of South Dakota and nearby eastern Wyoming (Faulkner 2010, Wheeler 2003). Richardsonii also probably accounts for most wintering Merlins in Nebraska (Jorgensen 2012, Wheeler 2003).

Columbarius is a boreal breeder (see Wheeler 2003) and thus a long-distance migrant passing through Nebraska mostly in central and eastern parts of the state; it is rare in migration in Colorado (Andrews and Righter 1992) and “very rare” in Wyoming (Faulkner 2010). It winters in Nebraska, albeit “sparsely”, mostly in the Platte and North Platte River Valleys (Wheeler 2003) and in the east; most wintering birds are females (Wheeler 2003). Complicating matters is the occurrence of a “dark form” among females of columbarius (Wheeler 2003) which is difficult to distinguish from suckleyi (“black Merlin”) without excellent photographs.

Some authors distinguish paler birds in the western part of the range of columbarius as the subspecies bendirei, noted by Rapp et al (1958) as occurring in Nebraska, but these birds are currently thought to be insufficiently different from columbarius to warrant sub-specific status (Pyle 2008).

Subspecies suckleyi has occurred several times east and south to western Montana and the east edge of the Rocky Mountains to at least the border with Mexico. East of the Rockies there are about ten documented records (eBird, Wheeler 2003), including one each for New York and Massachusetts, and three for Texas. The records for suckleyi closest to Nebraska (eBird.org) are 26 Jan 2020 Albany Co, Wyoming, and, in Colorado, 14 Mar 2022 El Paso Co, 17 Apr 2020 Adams Co, and 23 Apr 2013 Weld Co.

Data from eastern Nebraska indicate a peak of occurrence in Apr, probably due to migrants of columbarius; there is no indication of such an Apr peak in the west, where columbarius is rare. Away from wintering areas in the south and east, data on spring arrival of columbarius are lacking.

Summer: This species (richardsonii) had been suspected of breeding on the Pine Ridge since 1938, notably in Squaw Creek Canyon (Hudson 1939), but no direct evidence was obtained until 1975, when a nest with two eggs was found 13 Jun in a ponderosa pine in a sheer-walled canyon in Fort Robinson SP, Dawes Co (Lock and Craig 1975). Lock (1979) reported seeing adults in Jun 1977 northwest of Crawford, Dawes Co, and in Jun 1978 southeast of Crawford. On 9 Jun 1978 another nest was found, also at Fort Robinson SP; this nest was only 1.5 miles from the first and contained one egg and four young chicks (Lock 1979). Success of either nest was undetermined. Other nests, one with five 3-5 days-old eyases and the other with five 5-7 days-old eyases that were “too young to band”, were found 17 June 1980 in Coffee Canyon and 13 June 1980 in Cedar Canyon, respectively, in northern Sioux County (NGPC, unpublished data). Territorial birds were observed at the Coffee Canyon site in 1982, 1983 and at both Coffee and Cedar canyons in 1991 (NPGC, unpublished data). Nest cards were submitted for Sioux Co 1983 (Bennett 1984) and 1984 (Bennett 1985) without details. The 1983 record may have referred to a nest with eggs 14 miles WNW of Crawford, Sioux Co 7 Jun 1983 (Dinan; Mollhoff 2022). An adult female was observed on a nest, apparently incubating eggs, northwest of Crawford on 7 Jun 1984 (NGPC, unpublished data).

In 1991 NGPC surveys of sites where nesting or territorial birds had been previously observed documented a total of 10 active nests, all in the Pine Ridge of Sioux and Dawes Cos. Five young were observed at one of these nests 14 Jul; another contained four young 13 Jul.

Nesting raptor surveys conducted on Nebraska National Forest and Oglala National Grassland properties by Pine Ridge Ranger District staff in 1994 produced additional evidence breeding extending into the mid-1990s (Muenchau 1994). On 19 Jul 1994, an adult pair and at least two fledglings were observed approximately 12 km south southeast of Chadron, Dawes Co, and on 20 Jul 1994, a male and a fledgling were observed about 8 km southwest of the unincorporated village of Joder in Sioux Co (Muenchau 1994). Only one adult Merlin and no evidence of nesting were observed during similar surveys in 1996 (Muenchau 1996). There is no evidence of breeding in Nebraska since 1994.

As with Peregrine Falcon, several northern Great Plains cities have established urban-breeding Merlins since the 1980s (Warkentin et al 2005), but so far none have been established in Nebraska.

Early dates above are away from the Pine Ridge and unidentified to subspecies, except for a juvenile richardsonii photographed in Knox Co 8 Aug 2018.

An earlier date (subspecies unspecified) away from the Pine Ridge are of one at Lake Ogallala, Keith Co “early Aug” 1993 (Brown and Brown 2001).

Most Merlin reports in the east are in Sep-Oct, probably as numbers of arriving richardsonii coincide with peak migration of columbarius. Dec dates may be of birds attempting to overwinter (see Winter). A westerly columbarius was in Dawes Co 28 Nov 2020.

A survey in eastern Nebraska (Loren and Babs Padelford, personal communication) yielded a maximum for any one year of 10 sightings.

Winter: As a species, wintering Merlins occur statewide, although numbers are lower in the east. Rosche (1982) listed it as an “uncommon winter visitant” in northwest Nebraska and single birds are commonly reported on CBCs statewide. The winter range underwent a northward expansion on the Great Plains 1960-1990 (Warkentin et al 2005); Nebraska reports suggest this increase is largely due to increasing numbers of wintering columbarius.

Most wintering birds are richardsonii (Wheeler 2003), which are more common westward, and common in eastern Colorado (Wheeler 2003). 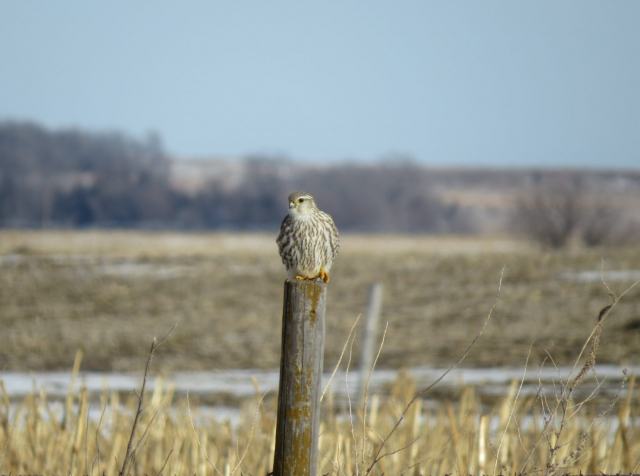 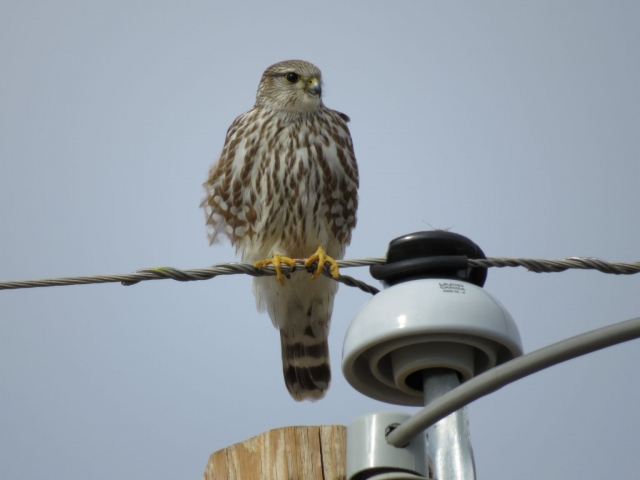 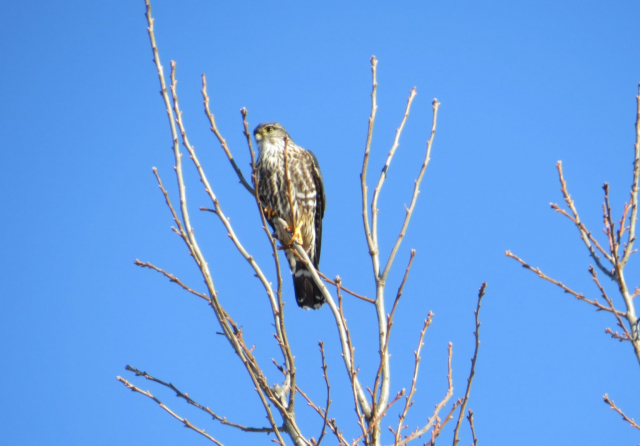 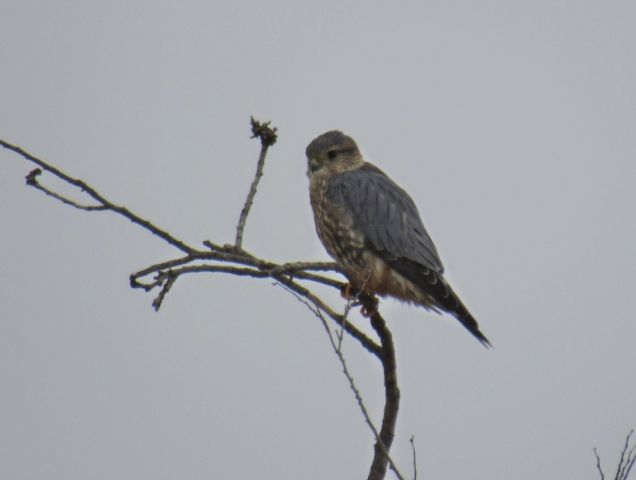 Hudson, G.E. 1939. Some ornithological results of a six-week’s collecting trip along the boundaries of Nebraska. NBR 7: 4-7.