Changes Since 2000: Expansion of the breeding range into Nebraska has been slow; breeding locations have increased in number, although some are short-lived. Migrants are reported more often statewide, especially in fall, reflecting increasing numbers in Kansas and elsewhere; there is a noted northward post-breeding dispersal in that state (Thompson et al 2011).

There are few reports of spring migrants, especially in the northeast, but they are increasing, however; 17 of the 30 overall easterly reports are since 2000. Immature non-breeders may wander north of the breeding range in spring; singles were in northeast Cherry Co 17 May 2018 and at Gordon, Sheridan Co 27 May 2018 and 20 May and 1 Jun 2020.

Summer: Mississippi Kites were first noted in Ogallala, Keith Co 27 Jul 1991 (Rosche 1994, Brown et al 1996). The first confirmed nesting there was 6 Aug 1994, when 11 birds were counted overhead and two nests were found (Dinsmore and Silcock 1995). A report “without details” of two nests found there 15 Jul 1994 (Grzybowski 1994, Mollhoff 2016) used an incorrect date. Local residents stated that the birds had been in the area for the past several years (Dinsmore and Silcock 1995). The Ogallala population has increased since the 1990s; 17 were seen late Aug 2005, and as many as 36, some possibly migrants, were overhead 11 Sep 2012. The year 2010 was a “very productive year” when a minimum of five nests produced young; four nests possessed juveniles 29 Aug. In 2011 a minimum of eight nests, along with non-breeding immatures and possible migrants, would have accounted for the 34 seen overhead 2 Sep (Jim Ochsner, pers. comm.). Numbers were lower in 2020, thought to be a result of certain preferred nesting trees being cut down (Jim Ochsner, pers. comm.).

Successful breeding has occurred at North Platte beginning 2012, when a chick was raised to fledging stage but died 29 Aug. Two nests in 2013 had fledglings, but storms blew the young out of the nests; the young were taken to Raptor Recovery. Two nests were found in 2014, but outcomes were not reported. Three were at Centennial Park, North Platte 26-27 Aug 2015, suggesting breeding there, and three were in North Platte 31 May-3 Jul 2017 including a juvenile 3 Jul. At least 13 were present 30 Jun 2018, nestlings were photographed 10 Jul, and a fledgling 4 Aug. In 2019 an incubating adult was photographed 5 Jul and a newly-fledged juvenile was seen with an adult 17 Aug. An adult had arrived in 2020 by 5 May, and 18 were present 15 Jul, although no nests were reported. A good tally at North Platte was 21 on 10 Jul 2021.

Singles were seen overhead at two locations within two miles of each other in Lincoln, Lancaster Co 11 and 29 May 2018 and two adults were in the area, near Antelope Park, 31 Jul-2 Aug 2019, followed by sightings of two juveniles being fed near a nest 11 Sep (Dina Barta, pers. comm.; eBird.org). Two birds were in the area 9 Jun-16 Jul 2020, but no nests were reported. There were several sightings over Lincoln in 2021 of up to three birds 8 May- 2 Jul, and a nest with two fledged juveniles nearby was photographed 9 Sep (Dina Barta).

Seven were present and copulation was observed in Scottsbluff, Scotts Bluff Co in 2011, but no nests were found. There were no further reports until 2020, when two nests were found, at 18th and H and 310 West 19th; adults were feeding young at both nests 13 Jul and 26 Jul respectively (Kathy DeLara, pers. comm.). Nesting continued there in 2021.

Three were present all summer through at least 28 Jul 2012 although no nest was found, and 3-4 were present in 2017 and, while two large nests were found, they were not conclusively identified as of this species. However, nesting occurred in  2021 (Chuck Krysel, pers. comm.).

A pair successfully raised a chick in Red Cloud, Webster Co in 2004; adults returned in 2005 and 2006, but this site appears to have been abandoned.

Additional locations where birds have been present during the summer and breeding was suspected, but not yet confirmed, are Imperial, Chase Co; Benkelman, Dundy Co; and Kearney, Buffalo Co. A pair was at Imperial from early Jul in 2011; on 17 Aug 2013, adults there “looked to be feeding young”, and 1-3 were present 28 Jun-12 Jul 2016, three were over Imperial 9 Jun 2017, and seven, six adults and an immature, were counted there 27 Jun 2018. There were as many as seven at Benkelman, Dundy Co 3-23 Aug 2010; local residents said the birds had been present “a few years” and there have been sightings of 2-3 birds through 2017. At Kearney, up to four were seen near 27th St and First Ave 10 Jun-6 Jul 2016, including one “plucking leaves” 12 Jun.

Recent reports from the Douglas Co area are suggestive of incipient nesting: two birds, an immature and “possible adult” were at Neale Woods 26 Jun 2015. Another pair was seen in 2016 around 122nd and Center in Omaha 10-13 May, 16 Jul, and 29 Aug; an adult and a juvenile were seen perched together on the latter date (Rick Schmid, personal communication). No nest was found, but the timing and presence of an adult and juvenile together are suggestive of breeding; early dates for fall migrants are 10-16 Aug. In 2017, 1-2 were in a different Omaha neighborhood 8-9 May.

The species has been seen in Hastings, Adams Co for several years, including two seen 2-14 Jun 2020, but no nests have been found (Paul Dunbar, pers. comm.).

Recent reports elsewhere are of one seen briefly near Brownville, Nemaha Co 20 May 2017, and Mollhoff (2016) shows a “Probable” nesting report near Steele City, Jefferson Co; one was over Fairbury, Jefferson Co 5 Jun 2021.

There are at least 18 additional reports Jun-Jul statewide; since breeding takes place from late May through early Sep, these reports are probably of non-breeding immatures.

The hawk watch at Hitchcock Nature Center in Pottawattamie Co, Iowa, in the Missouri River Valley, has shown in recent years that there can be a significant movement southward in fall; 38 were counted there in 2000.

Comments: There is a specimen SUI 14584 in the University of Iowa Talbot Collection taken in Knox Co in 1885; no specific date was given, however. 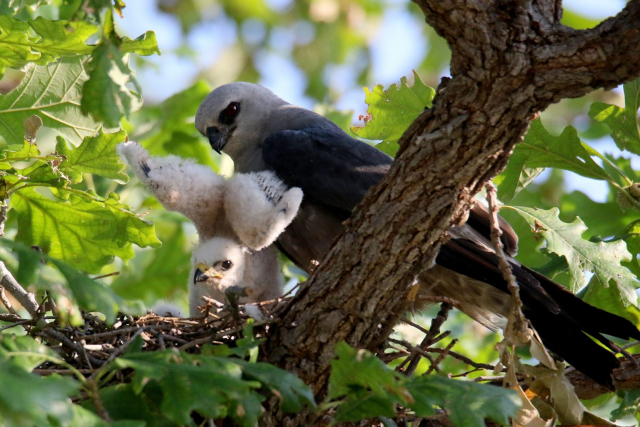 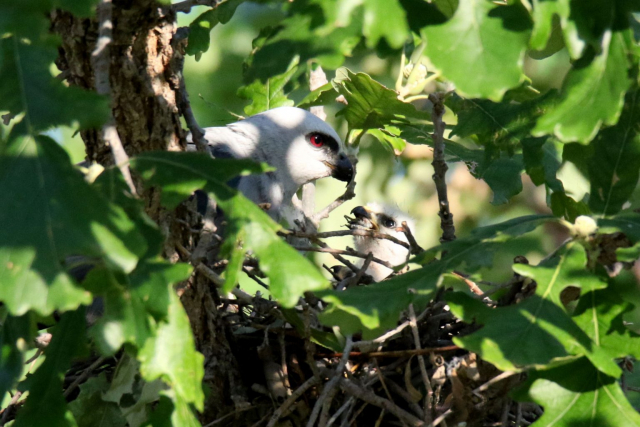 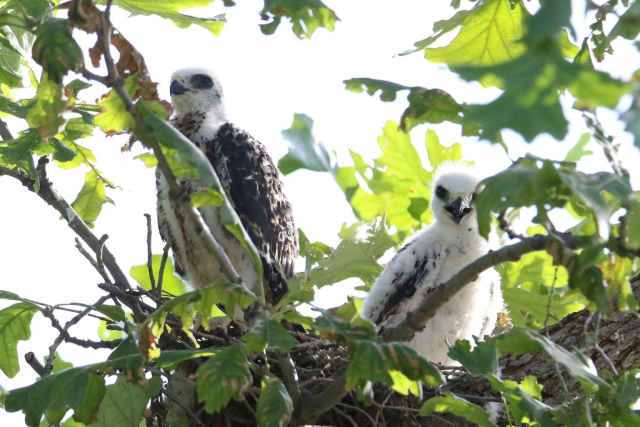 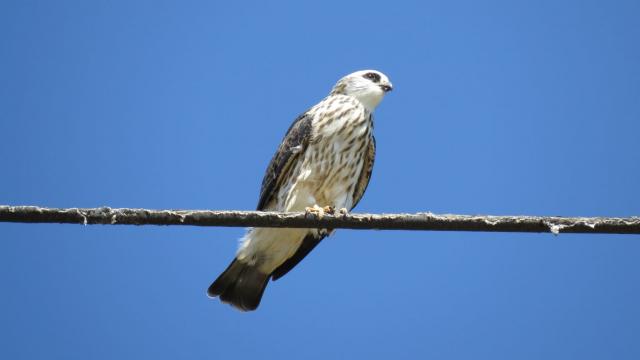 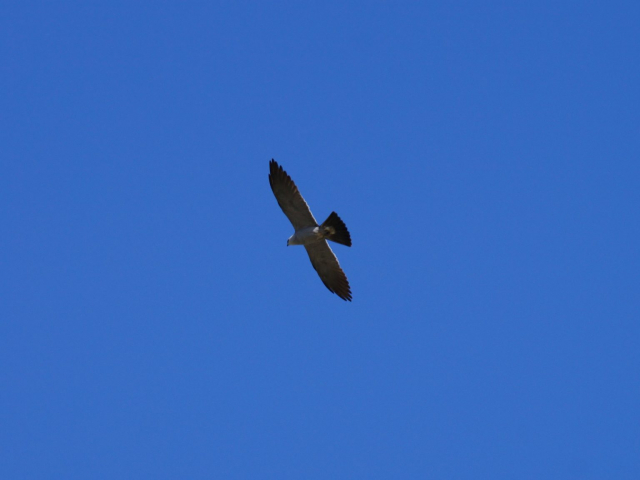 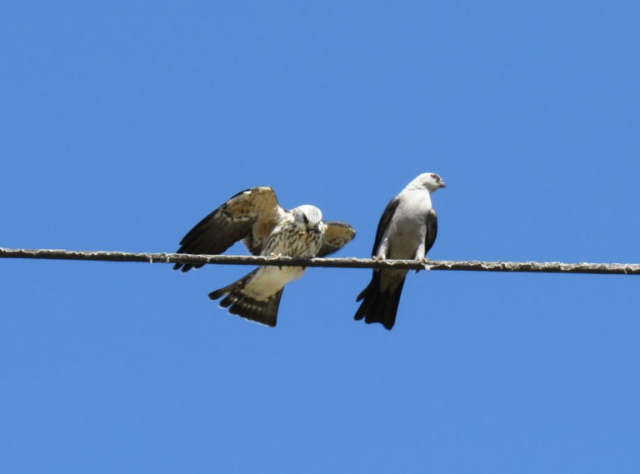 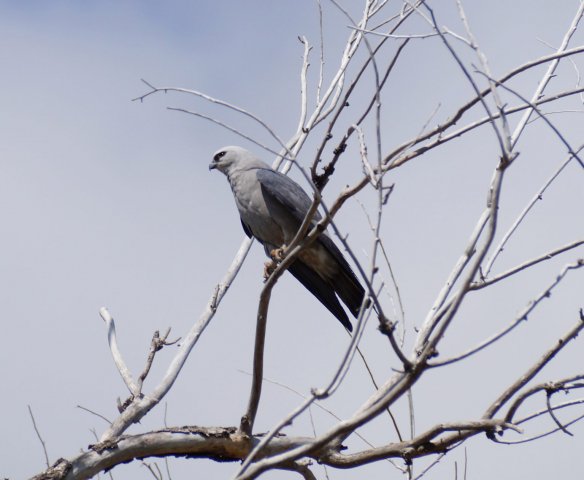 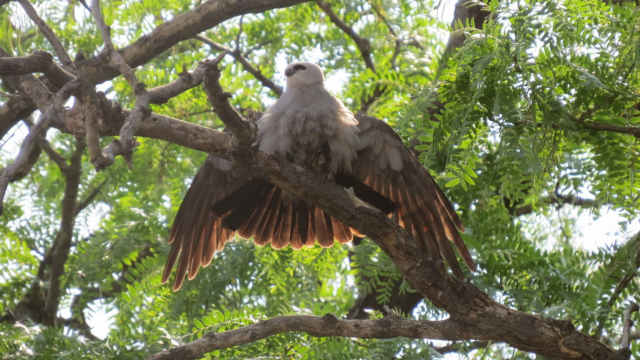