Taxonomy: Five subspecies are recognized (Gill and Donsker 2017), two occupying North America north of Mexico: marginella breeds in the western USA from British Columbia to south-central Mexico and east to Minnesota and Arkansas (AOU 1957), and carolinensis breeds in the eastern USA east of marginella, south to Bermuda and the Bahama Islands.

Rapp et al (1958) list marginella as the subspecies occurring in Nebraska, although Otis et al (2020) show the zone of overlap of the two subspecies to include extreme southeast Nebraska. It is likely that darker-plumaged eastern subspecies carolinensis and intergrades occur in eastern Nebraska during migration periods.

Only in the north and west is this species essentially absent in winter (see Winter). In those areas, spring arrival is generally in early Mar. An indication of the build-up in numbers in spring in the north were total counts by month in 2018 in Cherry Co of 9, 81, and 198 for Mar, Apr, and May respectively (James Ducey, pers. comm.).

Summer: Breeding densities are uniform over most the state, although lowest in the Panhandle (Sauer et al 2017). BBS trend analysis shows numbers have been relatively stable from 1966-2015, but with regional declines in the southeast and increases >1.5% per year in the west. One of the most numerous species reported on BBS routes, routes in the north, south, and east average 79.7 birds per route, and those in the Panhandle 50.7 birds per route.

Juveniles from early broods may begin migration as early as Jul, but adults generally molt before departure (Traylor 1991). Jul flocks can be large: 300 were in Dawson Co 29 Jul 2001, and 245 in two flocks were in Cass Co 11 Jul 2000. Peak migration occurs around 1 Sep (see High Counts). 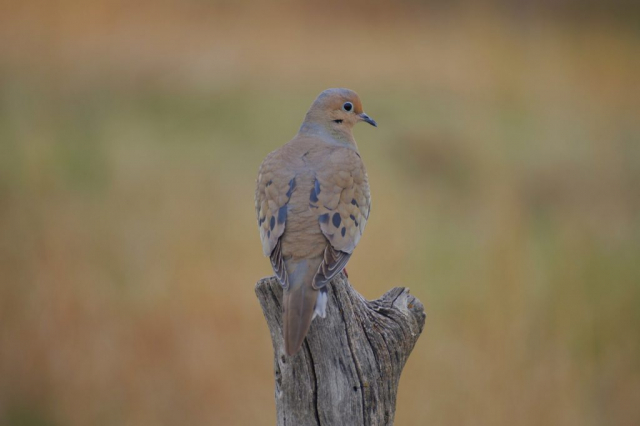