Migrants arrive on the breeding range in early Mar and are territorial soon after; a pair was at a James Ranch, Sioux Co, nest box by 10 Mar 1995, and eight pairs were at nest boxes in the Wildcat Hills of Banner and Scotts Bluff Cos by 22 Mar 2003. Spring migration records extend eastward into the central.

Summer: Regular breeding occurs in open pine woodlands associated with areas of high relief in the Panhandle. Eastern limits on the Pine Ridge are in Sheridan Co, where there are reports 4 Jun 1986 and 20 Mar-12 Jun 1992. In the Wildcat Hills there are reports east to extreme southeast Banner Co on 17 Jun 2000 and 13 Jun 2009, and on the Bighorn Escarpment in southwest Morrill Co 18 Jun 2010. Mollhoff (2016) showed an increase in reports in Banner and Kimball Cos, including confirmed breeding in western Kimball Co. There were reports from Kimball Co 7 and 15 Aug 1996 and 17 Aug (year not given) that suggest breeding occurred in the 1990s.

There are occasional breeding season reports of birds out of the expected breeding range. A remarkable extralimital report was of a pair feeding young 17 May 1992 at a picnic shelter at Red Willow Reservoir, Frontier Co (Ruth Green; Mollhoff 2001). The only other breeding season reports away from the breeding range are 28 Jun 1969 McPherson Co, 4 Jul 1988 Keith Co, and 10 Jul 2015 at Walgren Lake, Sheridan Co 10 Jul 2015.

An unusual summer aggregation of 100 in southern Scotts Bluff Co 30 Jul 2011 was ascribed to large numbers of grasshoppers in the area.

This is perhaps the only species whose summer and winter ranges are in separate Nebraska locations with no overlap, possibly performing an “altitudinal migration” between summer and winter ranges. There are, however, no banding data to show that the same birds might be involved. The summer range is completely abandoned in winter (Rosche 1982).

Wintering birds are most commonly found along the Platte River Valley, east to southwest Dawson Co, although large numbers were wintering in Merrick Co near Hordville 1978-79 (Morris 1979). The extensive juniper area in southeast Lincoln Co and adjacent parts of Dawson, Frontier and Hayes Cos appears to hold most wintering Mountain Bluebirds. This habitat appears to be somewhat unusual for this species in winter, which prefers “relatively open areas with some available perches, such as trees and bushes“ (Johnson and Dawson 2020) but is likely utilized because of an abundant food supply of juniper berries. The North Platte CBC has recorded an average of 133 birds each year since 1987-88, with a high of 400 in 1988-89; 400 were in cedar canyons in southeast Lincoln Co 2 Jan 2000. 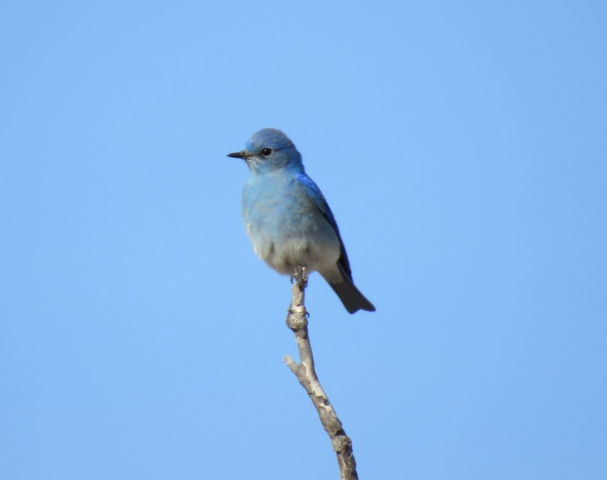 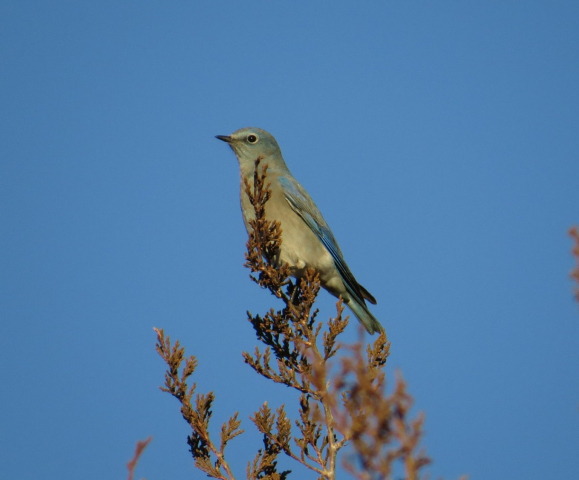