Taxonomy: Four subspecies are recognized (Gill and Donsker 2017): atratus of northwest Mexico, gambeli of the eastern Rocky Mountains, inyoensis of the central Rocky Mountains, and baileyae of the Pacific Slope of the Rocky Mountains in the western USA and western Canada.

This species stages irregular irruptions onto lowlands east of the Rocky Mountains, at times reaching Nebraska in small numbers. Most reports are of birds at feeders in Scotts Bluff Co and eastward on occasion, suggesting provenance similar to that of Steller’s Jay, likely the eastern Wyoming forest at and around Guernsey State Park, some 30 miles from Nebraska on the North Platte River.

There were no reports for the following twenty-year period; a single bird was at Ogallala, Keith Co 24 Nov 1995 (Grybowski 1996) and an irruption followed during winter of 1996-97. Up to seven were reported at Stateline Island, Scotts Bluff Co 5-12 Oct 1996 (Brogie 1997) and three were at a Scottsbluff feeder the same day. Several were subsequently noted at Scottsbluff and Gering feeders (Brogie 1997), and up to five were at feeders at the Wildcat Hills NC through 19 Apr 1997. Additional reports were of one at Riverside Park, Scottsbluff, 27 Oct 1996 (Brogie 1997) and a single as far east as North Platte, Lincoln Co 4-6 Dec 1996 (Silcock and Jorgensen 1997). The final reports for the irruption were of singing birds 30 Apr 1997 at Scotts Bluff NM, Long Canyon, Banner Co 3 May 1997, and at Winters Creek Lake, Scotts Bluff Co 4 May 1997.

In fall of 2007 this species moved onto the Colorado plains in some numbers; numbers were also high in Nebraska during winter 2007-2008 with a final tally of 13 including reports away from the North Platte River Valley and east of North Platte. These may have been birds that followed the South Platte River from Colorado: North Platte, Lincoln Co 20 Mar, Johnson Lake, Gosper Co 13 Mar, near Sidney, Cheyenne Co 5 Apr, and 20 Apr in Banner Co.

In winter 2020-2021 at least 20 were reported from about eight locations in Scotts Bluff, Banner, Kimball, and Lincoln Cos, beginning with nine near Pine Bluffs in Kimball Co 18 Oct; the Lincoln Co record was of one at Cody Park, North Platte 18 Nov-24 Jan. Last reports in spring 2021 were of one in Kimball Co 21 Apr and two in Scotts Bluff Co 22 Apr. Notably, the only northern Panhandle record was at Harrison, Sioux Co; the nearby Pine Ridge is a winter stronghold of Black-capped Chickadee; perhaps Mountain Chickadees avoid areas frequented by good numbers of Black-capped Chickadees, although the river valleys appear to provide logical points of entry into Nebraska. 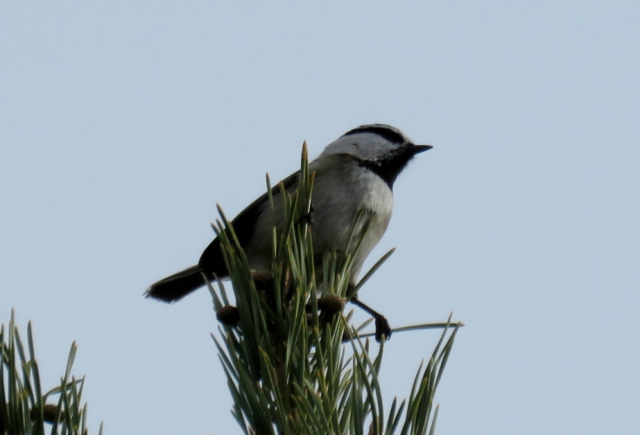