Most spring sightings of Mountain Plovers in Nebraska are likely of arriving local breeders; true migrants heading further north to Wyoming or Montana are probably very rare as far east as Nebraska. The species is accidental in South Dakota (Tallman et al 2002). Most of the total Nebraska reports are in spring, in the period 24 Mar-16 May, with an earlier date of four on 18 Mar 2004 Kimball Co (Bly et al 2008). The only reports away from Kimball Co are 7 Apr 1917 (specimen cited above), two southeast of Sidney, Cheyenne Co, 17 Apr 1998, and a sighting at Clear Creek WMA, Keith and Garden Cos 21 Apr 1989 (Rosche 1994).

Approximately 30-40, primarily adults, have been banded annually in Kimball Co since 2010 as part of numerous research projects. Usually, 5-10 birds are re-sighted annually; unique color-leg bands identify the individuals. In 2016, the first juvenile survival record occurred; a 20-day-old chick banded in Kimball Co 5 Jul 2014 with a unique leg-color combination was photographed and confirmed to be the same individual 23 Apr 2016, now a two-year old adult. It was found on a farm field within one mile of where it hatched in 2014 (Angela Dwyer, personal communication).

Summer: Mountain Plover breeding range has been affected by conversion of extensive unfragmented areas of native mixed- to short-grass habitat to various agricultural uses. As part of this conversion, grazers like bison and prairie-dogs that had kept the vegetation short and opened up areas of bare ground, were removed (Stephen J. Dinsmore, personal communication). Before settlement by Europeans, it is likely this species bred over large areas of the Panhandle, including Cheyenne, Dawes, and Sioux Cos (Bruner et al 1904). Still earlier, when bison grazing maintained short grass prairies considerably to the east, at least one breeding occurrence was recorded from Lincoln Co in Jul 1859 (Coues 1874; Ducey 1988, Mollhoff 2022), and specimens were collected in 1856-57 at the “Loup Fork of the Platte”, presumably in present Platte Co (USNM 9043, 9044; Coues 1874). We have been unable to locate these specimens.

The only modern record north of the North Platte River Valley is of two along Prairie Dog Road in the Hat Creek Valley, Sioux Co 2 Jul 2020 (Leukering, Dunning; eBird.org).

Most of our current knowledge of Mountain Plover in Nebraska has come from extensive field work carried out 2002-2016 in the southwest Panhandle by Bird Conservancy of the Rockies (Bly et al 2008). A total of 278 nests were found 2002-2007, all but six in agricultural fields, primarily dry-land wheat or millet (Bly et al 2008). The highest nest count during the study was in 2007, when 111 were located, most in Kimball Co, but also in Cheyenne and Banner Cos; nest success was 85%, with losses due mainly to predation and cultivation. Additional research showed chick survival in agricultural fields to be 0.52 ± 0.08 during 2010-2012 (Angela Dwyer, personal communication). Conservation efforts involved working with landowners to locate and mark nests so they could be avoided during tillage operations. Bird Conservancy biologists and farmers have found and marked 970 nests, averaging more than 70% hatching success from 2001-2016 (Angela Dwyer, pers. comm.). Bly et al (2008) delineated the Nebraska breeding range of Mountain Plover as mapped; within this area the breeding population was estimated to consist of as many as 180 pairs using the 106,000+ available acres of dry land wheat and millet fields (Bly et al 2008).

Following a severe storm in spring 2010, adults and failed breeders had segregated into two groups by 1 Jul, failed breeders, and adults with broods. The presumed failed breeders were in small groups of 5-7, at least three weeks before flocks usually form, and by 21 Jul these flocks had increased in size to 15-20 birds. As of 28 Jul, 23 adults were still being tracked, 14 of which had young, several of which had reached flight stage (Bart Bly and Larry Snyder, personal communications). 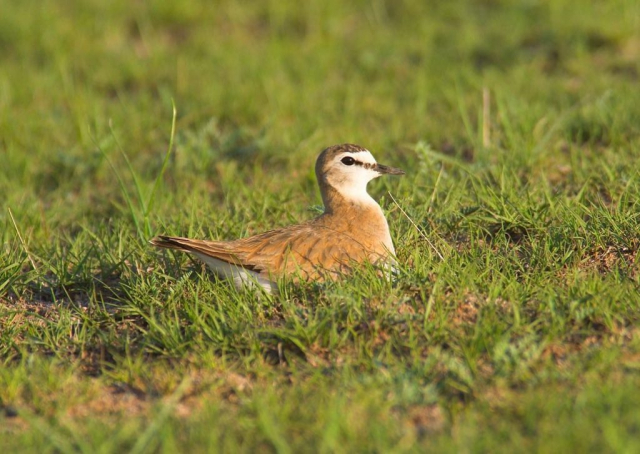 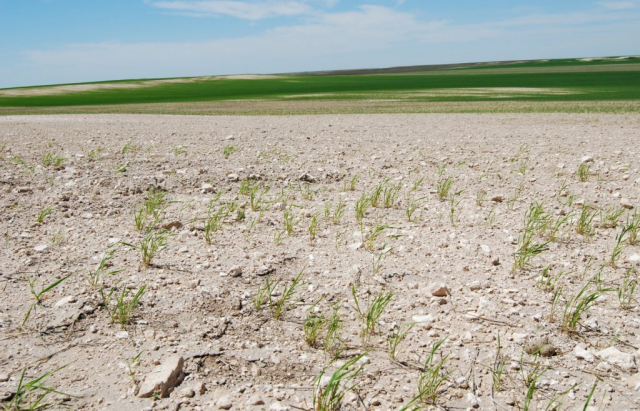 Stephen J. Dinsmore and Angela Dwyer reviewed an earlier draft of this species account and provided numerous helpful comments that improved the content and composition. Photograph (top) of a Mountain Plover in Kimball Co, 10 Jun 2003, courtesy of NEBRASKALAND/Nebraska Game and Parks Commission.

Coues, E. 1874. Birds of the Northwest: A handbook of the ornithology of the region drained by the Missouri River and its tributaries. Government Printing Office, Washington, DC, USA.