Changes since 2000: Evidence that at least some of the several Mute Swans reported in Nebraska since (and likely before) 2000 were indeed wild birds resulted in this species being accepted on the Official List of Birds of Nebraska (Brogie et al 2016; Brogie 2015).

The status and history of Mute Swan in Nebraska was discussed by Brogie et al (2016). There is no established wild population breeding unaided in Nebraska; the nearest self-sustaining breeding populations to Nebraska are in northeast Illinois and northern Indiana (Baldassarre 2014). Breeding pairs are strongly sedentary, but juveniles and non-breeders may travel unknown distances in fall, beginning in Sep (Ciaranca et al 2020). According to Palmer (1976), “This swan may appear anywhere in at least temperate North America”. An immature banded in Wisconsin July 1984 remained with an adult on the Mississippi River near Winfield, Lincoln Co, Missouri, 6 Jan-9 Feb 1985 (Robbins and Easterla 1992). This record indicates that fall dispersal may involve larger distances than generally credited to this species, in this case some 350 miles. More recently, it has become known that significant spring dispersal occurs among non-breeding subadults; this dispersal “may be their birth site or a new area, depending upon the aggressiveness of adult birds in the area” (Marks 2018).

There are three accepted records:

The first record was of a wary, unmarked pair in extreme western Dixon Co for about a month prior to and including 8 Nov 2014 (Brogie 2015, Brogie et al 2016). The NOURC had not accepted any submitted sightings as wild birds until 2014. As stated by Brogie (2015): “Both swans were unbanded, each had both [halluces] (hind-toes) and both were capable of strong flight. These factors in conjunction with the birds’ age, sex, timing of the sighting, remoteness of the sighting’s location, birds’ appearance and association with other migrating waterfowl, the birds’ wary behavior, and the increasing species numbers to the east were believed indicative of wild provenance.” Second was one that wintered at Carter Lake 19 Dec 2016-9 Dec 2017 (Brogie 2017). The third accepted record pertaining to wild Mute Swans (NOURC in press) was a subadult at Jackson SL, Dakota Co 6 Dec (Bill F. Huser, eBird.org), apparently one of two subadults first reported 7 Jun 2021 in the Gavin’s Point Dam area and subsequently at Jackson SL (eBird.org).

Nebraska reports that might pertain to wild birds follow (Brogie et al 2016). An immature was at Crystal Cove Lake, Dakota Co 9 Nov 1991, but the NOURC was unable to rule out the possibility that it was an escapee (Gubanyi 1996). A free-flying family group of six was at Crystal Lake, Blair, Washington Co on 6 Feb 2015, declining to five on 14 Feb and four around 20 Sep; the orange bills of the two adults were clearly seen, as were the dark bills and “dirty” look of the juveniles. Two apparently unmarked juveniles were photographed at Wehrspann Lake, Sarpy Co 1-23 Nov 2008; provenance could not be determined by the NOURC (Brogie 2009). These two birds, now adults, were likely the birds seen at Wehrspann Lake 27 Apr 2009 through Nov 2009, and at least a few of the reports of adults in the Omaha area through fall of 2012 may have been of these same birds. The provenance of two near Cunningham Lake, Douglas Co 23 Dec 2019 was unknown.

Elsewhere, domesticated Mute Swans have been reported often, mostly in the Omaha area. From 4 Sep 2008 through 1 Dec 2010 there were scattered reports of 1-2 adults in the Omaha area; during this period Boystown Lake hosted 2-4 from fall 2008 through 30 Jan 2009, one of which had a silver band on its right leg, and a pair 5 Mar 2011 and 29 Dec 2011 through 9 Jan 2012. A juvenile undergoing pre-formative molt (Howell 2010) at Zorinsky Lake, Omaha 17 Mar 2010 may have been offspring of the Boystown Lake birds. A resident pair near One Pacific Place, Omaha, Douglas Co had five cygnets 13 May 2015; the captive pair has raised cygnets there for several years, including eight raised in 2014 but not seen after mid-Sep (Bob Wells, personal communication). Two reports from Omaha, Douglas Co in fall 2016 were of single adults, probably the same bird: on 9-10 Oct at Waterford Lake in area of 150th and Ida St, and 13 Oct 7.5 miles south photographed at Zorinsky Lake. Two were at the latter location 9 Dec 2017, one of which apparently died after hitting an overhead line 13 Dec; its presumed mate was about a quarter-mile from Zorinsky Lake at Lakeside Park 13-21 Jan 2018, and has been reported since, through May 2019. Heartland of America Park, Omaha, hosts domestic Mute Swans; six reports from there 2014-2019 have been in Apr-May and Oct-Nov. There were reports from five Douglas Co locations of 1-2 birds in spring and summer 2017, including a free-flying bird at Henry Doorly Zoo, Omaha, Douglas Co 2 Jun; another “feral” bird was at the Zoo 6 Jun 2020. One was near Cunningham Lake, Omaha 14 Mar 2020. An adult was at Jackson SL, Dakota Co, 30 Oct-4 Nov 2021.

There has been a small group in the Grand Island area since 1994, when there were 3-5 birds; apparently no young were produced and only one bird remained as of Jan 2011 (Steve Morris, personal communication). This group may have accounted for two adults at Harvard WPA, Clay Co 16 Apr 1995 (Jorgensen 2012) and three adults at Kissinger WPA, Clay Co 13 Jun 2011.

A long-present managed population at Yanney Heritage Park, Buffalo Co may have been the source of several reports in the area; four young were raised in 2015 and a pair with five young was present 11 Jun 2021 and 1-2 were there 26 Sep-10 Oct 2021. Although retained adults and juveniles are wing-clipped and all birds are accounted for, surplus birds are sold at auction which might open a possibility for strays and escapes. Sightings that might be related to the Yanney Lake population are: an adult at Cottonmill Park, Kearney 18 Feb 2021 that apparently “escaped from the barn”, an unmarked adult in northwest Kearney 23 Feb 2020, one at Kearney, Buffalo Co 9 Mar 2017, a single adult at North Park Lake, Kearney 13-15 Mar 2020, a near-adult near Kearney, Buffalo Co 23 Apr 2015 that had been present through the previous winter, and three adults on a lake near Odessa, Buffalo Co 5-8 Jun 1997. North Park, Holdrege, Phelps Co, only 30 miles from Kearney, hosted singles 22 Mar-5 Apr and 10 Nov 2018, five were there 3 Jul 2020, and the survivor of a donated pair was there 28 May 2021.

Additional reports, more likely of escapees, were of two adults and an immature at a known hobbyist’s location near Crete, Saline Co 11 Apr 2009. Two on the pond at Wyuka Cemetery, Lincoln, Lancaster Co 14 Oct 2012 and 16 May 2014 are apparently resident captives there. Bray et al (1986) cited two reports of escaped birds. 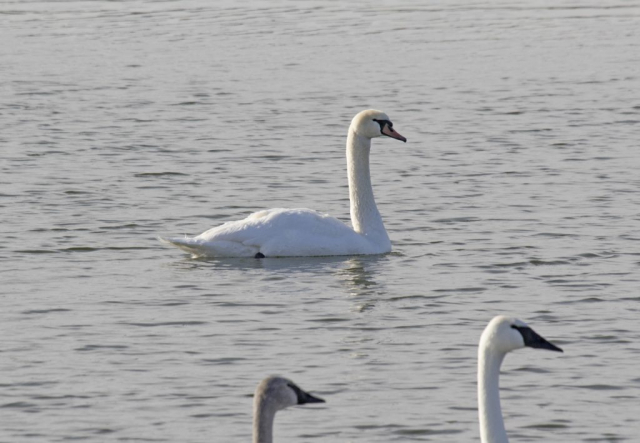