Movements of each of these phenotypes are discussed separately below.

Taxonomy:  Nine or ten subspecies are recognized, four occurring south of the US and six from Texas northward (Pyle 1997, Wiebe and Moore 2020). The latter six subspecies are separated into two subspecies groups, “red-shafted” and “yellow-shafted”. The four “red-shafted” subspecies are cafer of coastal Alaska to northern California, collaris of the Pacific Slope from California south, canescens of the Rocky Mountains from southwestern Saskatchewan south to Texas, and nanus of west Texas to northeast Mexico. The “yellow-shafted” group consists of luteus (includes borealis) from central Alaska to eastern Canada, south to the northern edge of the USA, and auratus of the southeast USA, south of luteus, and west to eastern North and South Dakota, the eastern half of Nebraska, and most of Kansas and Oklahoma (mapped in National Geographic Birds of North America, 6th Edition).

West of the range of auratus is a wide intergradation zone where “yellow-shafted” auratus and “red-shafted” canescens meet. There are probably no “pure” canescens in Nebraska in summer (Short 1961), and possibly only very few “pure” auratus in extreme eastern Nebraska, with most summer birds being intergrades (Short 1961); few parental types occur within the rather wide intergradation zone, where mating has been considered random (Sibley and Monroe 1990). Recent genomic studies, however, have found that phenotypic color differences in flickers are affected by an extremely small number of locations in the genome, undetectable by less sensitive methods, that might provide a basis for some level of assortative mating (Aguillon et al 2018, Aguillon et al 2021).

The center of the intergradation zone, which had been considered stable in position and width since the late 19th century (Moore and Buchanan 1985) and relatively young, only 4000-7500 years (Wiebe and Moore 2020), passed from the Black Hills of South Dakota southward through Chadron to near Crook in northeast Colorado (Short 1961). This placed the zone roughly along a north-south line in the center of the Nebraska Panhandle in the early 1980s (Moore and Buchanan 1985). A recent study, however, detected rapid movement (ca. 2.1 km/year) of the hybrid zone within the 35+/- years since the early 1980s westward about 60 mi (73 km) (Aguillon and Rohwer 2021) to align approximately with the Wyoming-Nebraska boundary. The hybrid zone has not changed in width, however (Aguillon and Rohwer 2021, Moore and Buchanan 1985). There was no detectable genetically driven basis to explain the shift in the hybrid zone; there is probably a minimal level of assortative mating within the zone (Aguillon and Rohwer 2021, Moore 1987). Aguillon and Rohwer (2021) suggested, therefore, that the hybrid zone shift may be tied instead to changes in the environment (land management and/or climate changes). Correlation of the position and width of the hybrid zone with ecological variables had been suggested by Moore and Price (1993), in particular the transition from ecological communities characteristic of the wetter East to the drier West. Swenson (2006) showed that environmental factors affected the position of Great Plains hybrid zones.

In winter, most birds in western Nebraska are at least “salmon-colored” (Rosche 1994), with some occurring east to the Missouri River; perhaps some fairly pure canescens appear also in the west (Andrews and Righter 1992), although all collected specimens are intergrades (Rapp et al 1958). Most migrants and wintering birds are northern “yellow-shafted” birds (auratus and luteus) that show very little intermediate character (Andrews and Righter 1992). Two birds labeled borealis (=luteus) in the Hastings Municipal Museum (HMM 26960) were collected in Adams Co 9 Feb 1951.

The status of flickers in Nebraska relating to eBird submissions was summarized by Jorgensen and Silcock (2020).

An interesting phenomenon occurring in several species, including Northern Flicker far east of the known hybrid zone, is reddening of primarily yellow feathers due to rhodoxanthin, “a rare carotenoid pigment of deep red hue” (Hudon and Mulvihill 2017). There is no apparent genetic cause of this increase in red pigment, but it is attributed to ingestion of the berries of two exotic shrubs, one of which, Tatarian honeysuckle (Lonicera tatarica), occurs in Nebraska (Hudon and Mulvihill 2017, Thomas Labedz, personal communication). In Nebraska this effect would be difficult to discern in winter as Northern (Red-shafted) Flickers occur over most of the state at that time, but any summer report of such birds might be attributable to Tatarian honeysuckle berry ingestion.

Resident: According to Wiebe and Moore (2020), “Birds that breed north of 37–38°N migrate to wintering grounds in se. U.S.; birds south of this latitude appear to be more or less resident.”  Thus, since Nebraska lies entirely north of “37-38”, breeders in the state generally will be expected to leave the state during winter, although a few may attempt to overwinter in mild conditions. Bent (1939) cited notes by a Dr. Paul L. Errington on the winter-killing of flickers in central Iowa, that involved a study of the droppings of the three birds that he studied during winter; “it appeared that they were much weakened by improper food, too large a proportion of indigestible seeds, mainly those of the sumac, and not enough animal food, which ordinarily amounts to more than half of the average food supply.”

In the west, movement is detectable as scattered winter distribution gives way to localized summer distribution on the Pine Ridge and along the Platte river valleys. This changeover occurs during Apr (see dates above).

Most migrating flickers in Nebraska are “yellow-shafted” birds of the subspecies luteus breeding in Canada and the northern US.

Summer: Breeding “yellow-shafted” flickers occur statewide, although numbers are much lower in the Panhandle, where mostly limited to the Pine Ridge (Rosche 1982), along the North and South Platte river valleys, and over large areas of the Sandhills where suitable habitat is restricted.

Peak migration occurs in during early Sep and Oct in the east and central where migrants may not be readily identified amongst local breeders, however passage of migrant “yellow-shafted” birds in the Panhandle is more easily discernible since there are fewer summering birds and occurs mostly during Sep.

As in spring, northern “yellow-shafted” breeders from Canada and states north of Nebraska are conspicuous migrants. Most migrant “yellow-shafted” flickers migrate through eastern Nebraska (see below); as Wiebe and Moore (2020) state: “banding recovery records show that northern populations of Yellow-shafted Flickers are strongly migratory, funneling into se. U.S. in late autumn”.

Winter: CBC data indicate a generally even winter distribution of flickers statewide, with somewhat lower numbers in the north and west.

The above dates are for birds with red shafts; later dates in the east without details are most likely paler shades, often referred to as “salmon-shafted”.

“Red-shafted flickers” do not breed in Nebraska, South Dakota, or Kansas (Tallman et al 2002; Thompson et al 2011). In South Dakota, no pure “red-shafted flickers” were found among 511 breeding specimens collected mostly in western South Dakota (Tallman et al 2002). Although there are numerous late May- early Aug Nebraska reports of “red-shafted” flickers in the west-central and Panhandle, few have details, and it is likely that most of these summer reports are of intergrades showing near-red shafts.

There is a significant eastward movement of “red-shafted flickers” in fall, apparently a continuation of altitudinal movement out of the mountains (Bent 1939), and another example of “altitudinal” migration in Nebraska (see Mountain Bluebird).

Winter: The distribution of “red-shafted flickers” on CBCs is strongly biased to the west; recent CBC data show that almost all flickers in the west are “red-shafted” or intermediate, and in the east only about 3% are “red-shafted”.

Maps in eBird indicate a concentration of wintering “intergrade flickers” in Kansas that dissipates in Apr as birds move north and west through Nebraska. Arrival dates in for such spring migrants are difficult to determine due to wintering birds in Nebraska.

Summer: Records for mid-Jun through mid-Sep are numerous only in the Panhandle. In the central and east, there are only 12 records 14 Jun- 31 Aug, four of these in the east.

According to Wiebe and Moore (2020), “Breeders from …  n. Great Plains (to include most of the northern hybrid-zone populations) migrate south-southeast, predominantly into e. Texas and Oklahoma.” Thus, “intergrade flickers” in Nebraska in fall reflect an influx of migrants from further north in the hybrid zone supplemented by “intergrade flickers” from further west. Maps in eBird indicate a concentration of wintering “intergrade flickers” in Kansas that builds up in Sep as birds move south and east through Nebraska. Departure dates for such fall migrants are difficult to determine due to wintering birds in Nebraska.

Winter: The distribution of “intergrade flickers” in winter across Nebraska resembles that of “red-shafted flickers”, with numbers declining eastward. 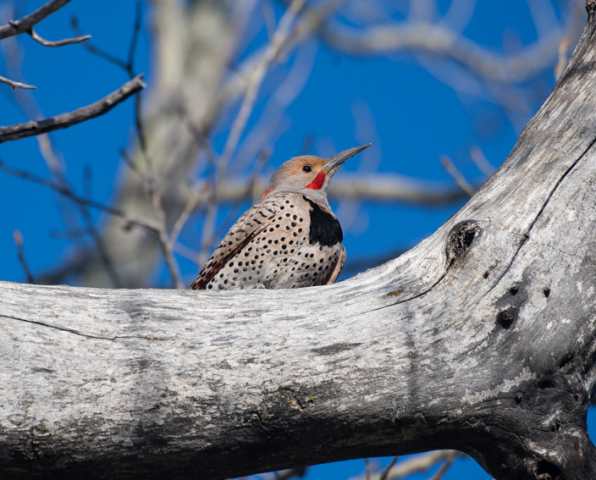 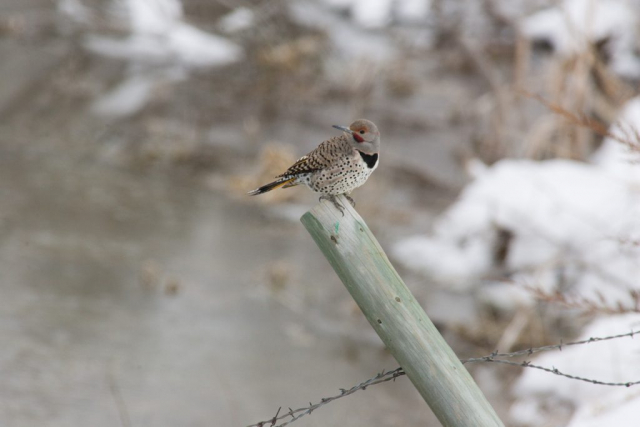 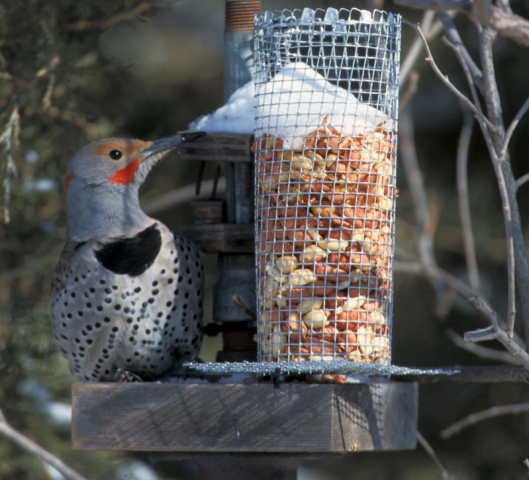 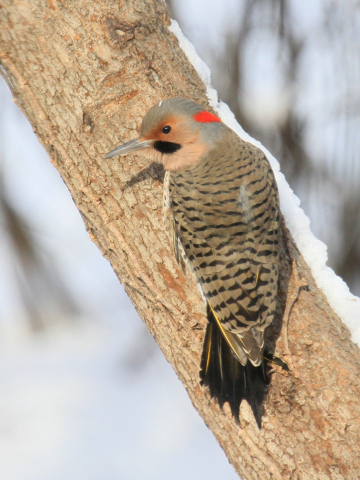 Moore, W.S. 1987. Random mating in the Northern Flicker hybrid zone: implications for the evolution of bright and contrasting plumage patterns in birds. Evolution 41: 539-546.