Taxonomy: Three subspecies are currently recognized (Farnsworth et al 2020); polyglottos breeds over much of North America, from southern Canada south to central Mexico and the northern Bahamas, with northern breeders migratory; orpheus and dominicus are restricted to islands in the Caribbean. Previously recognized western leucopterus has been synonymized with polyglottos (Phillips 1986).

Arrival is in late Mar, but there are several records Jan-Feb (see Winter).

This species is generally sedentary, but populations at the northern edge of the range, as in Nebraska, are migratory and depart in winter. Migration is most noticeable in spring when birds return and establish territories.

Summer: This species’ range has remained relatively stable for more than a century. Bruner et al (1904) wrote: “This bird is found throughout the entire state; south of the Platte a common summer resident and breeder; rare north of middle of state.” This distribution resembles closely that found by Mollhoff (2016), although, based on the low number of nesting records prior to 1930 and the increase after 1970, Mollhoff (2022) suggested a “range expansion/population increase” after 1950. Rapp et al (1958) considered it an “uncommon summer resident” both in the Panhandle and the eastern third of the state in the 1950s, implying lower numbers in central Nebraska and possibly overall. The distribution described by Rapp et al (1958) is reflected by the current BBS-determined distribution for 2011-2015, with highest densities in the southeast and southern Panhandle (Sauer et al 2017). Mollhoff (2016) showed that although total reports of mockingbirds increased moderately between the first (1984-1989) and second (2006-2011) breeding bird atlas periods (detected in 16% of blocks compared with 14%), the percentage of total reports north of the North Platte and Platte River Valleys doubled (27% compared with 14%). However, overall blocks and observer effort also increased markedly during the second atlas compared to the first (Mollhoff 2016). BBS trend analysis shows an annual change in abundance of – 0.61 (95% C.I.; -2.52, 1.33) during the period 1966-2015 (Sauer et al 2017). These figures suggest that mockingbirds are maintaining overall numbers in southern Nebraska. Reports farther north may suggest the species is continuing to expand northward. However, Jorgensen (2012) considered it still a rare migrant and casual breeder in the Rainwater Basin.

The BBS routes with highest numbers of Northern Mockingbirds are located in the extreme southeast (Johnson, Nemaha, Gage and Pawnee Cos), and along or south of the Platte River Valley (Gosper, Furnas, Keith and Lincoln Cos). A route in Nemaha and Pawnee Cos had 16 on 20 Jun 2015, a BBA block in Johnson Co had 12 on 8 Jul 2010, and five singing birds were on an 80-acre site in Pawnee Co 30 Jun 2007. Ludlow (1935) considered this species a “common summer resident” in Webster Co.

Breeding reports are fewest in the north; Mollhoff (2001) reported a nest in Arthur Co, one was found on a BBS route in northern Garden Co 17 Jun 2003, and one was carrying food in Wayne Co 14 Jun 2011. Of 18 total records in the north, including the three breeding records, 16 have occurred since 2005.

Departure times are difficult to determine, as there is a gradual movement southward in late fall (see Winter). A group of eight in cedars near Arthur, Arthur Co 21 Sep was indicative of peak migration timing. Northerly singles were at Gordon, Sheridan Co 29 Aug 2020, Cody, Cherry Co 17 Sep 2000, and Chadron, Dawes Co 26 Sep 2021.

Later Jan and Feb reports are discussed below under winter.

Winter: In fall and early winter, numbers decline as birds gradually leave the state. The few winter reports are scattered statewide, although the only records of over-wintering are of one at Pawnee Lake, Lancaster Co seen through the winter 2010-2011, 1 Jan-14 Mar 2014 in the North Platte, Lincoln Co area, 2 Jan-25 Feb 2012 Lancaster Co, and 31 Jan-27 Feb 2022 Lancaster Co. 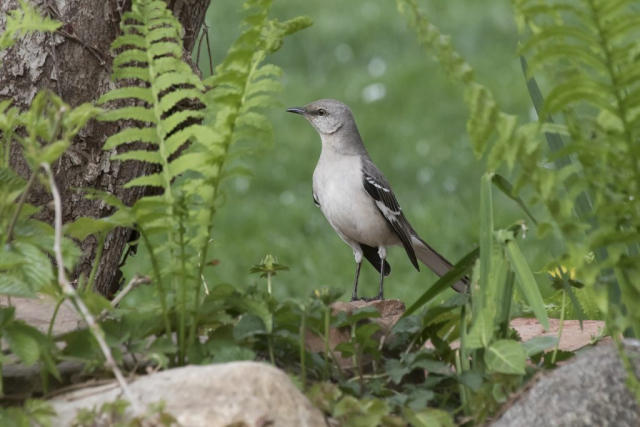